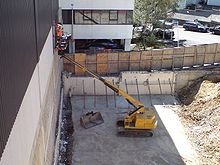 A tracked AWP at a building site.

An aerial work platform, also known as an aerial device or elevating work platform, is a mechanical device used to provide temporary access for people or equipment to inaccessible areas, usually at height. There are distinct types of mechanized access platforms and the individual types may also be known as a "cherry picker" or a "scissor lift".

They are generally used for temporary, flexible access purposes such as maintenance and construction work or by firefighters for emergency access, which distinguishes them from permanent access equipment such as elevators. They are designed to lift limited weights (usually less than a ton, although some have a higher safe working load (SWL)[1]), distinguishing them from most types of cranes. They are usually capable of being fully operated (including setup) by a single person.

Regardless of the task they are used for, aerial work platforms may provide additional features beyond transport and access, including being equipped with electrical outlets or compressed air connectors for power tools. They may also be equipped with specialist equipment, such as carrying frames for window glass.[1]

There are several distinct types of aerial work platforms, which all have specific features which make them more or less desirable for different applications. The key difference is in the drive mechanism which propels the working platform to the desired location. Most are powered by either hydraulics or possibly pneumatics. The different techniques also reflect in the pricing and availability of each type. 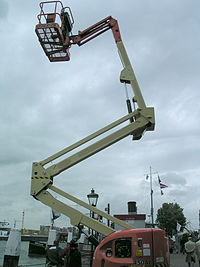 Aerial devices were once exclusively operated by hydraulic pistons, powered by diesel or gasoline motors on the base unit. Lightweight electrically powered units are gaining popularity for window-cleaning or other maintenance operations, especially indoors and in isolated courtyards, where heavier hydraulic equipment cannot be used. Aerial devices are the closest in appearance to a crane- consisting of a number of jointed sections, which can be controlled to extend the lift in a number of different directions, which can often include 'up and over' applications. 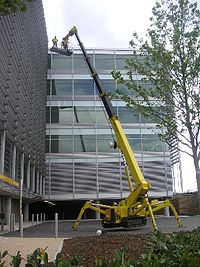 'Spider' set up outside a building.

This type of AWP is the most likely of the types to be known as a 'cherry picker', owing to its origins, where it was designed for use in orchards (though not just cherry orchards). It lets the picker standing in the transport basket pick fruit high in a tree with relative ease (with the jointed design ensuring minimum damage to the tree). The term 'cherry picker' has become generic, and is commonly used to describe articulated lifts (and more rarely all AWPs).

This type of AWP is now widely used for maintenance and construction of all types, including extensively in the power and telecommunications industries to service overhead lines, and in arboriculture to provide an independent work platform on difficult or dangerous trees. A specialist type of the articulated lift is the type of fire apparatus used by firefighters worldwide as a vehicle to provide high level or difficult access. These types of platforms often have additional features such as a piped water supply and water cannon to aid firefighters in their task.

Some articulated lifts are limited to only the distance accessible by the length of each boom arm, however, by the use of telescoping sections, the range can be vastly increased. Some large hydraulic platforms mounted on a lorry can reach heights of over 100 metres.[2]

The majority of articulated lifts require a wide supportive base to operate safely, and most models have extending legs/struts to help accomplish this. These legs can be manual or hydraulic (usually depending on size and price of the machine). Some AWPS are classified as 'spiders' due to the appearance of these legs. Spiders are also available in especially compact form, to fit through doorways for use inside buildings. 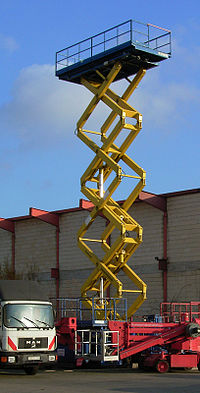 A scissor lift is a type of platform which can usually only move vertically. The mechanism to achieve this is the use of linked, folding supports in a criss-cross 'X' pattern, known as a pantograph. The upward motion is achieved by the application of pressure to the outside of the lowest set of supports, elongating the crossing pattern, and propelling the work platform vertically. The platform may also have an extending 'bridge' to allow closer access to the work area (because of the inherent limits of vertical only movement).

The contraction of the scissor action can be hydraulic, pneumatic or mechanical (via a leadscrew or rack and pinion system). Depending on the power system employed on the lift, it may require no power to enter 'descent' mode, but rather a simple release of hydraulic or pneumatic pressure. This is the main reason that these methods of powering the lifts are preferred, as it allows a fail-safe option of returning the platform to the ground by release of a manual valve.

There are a number of smaller lifts which use mechanical devices such as rack and pinion or screw threads to extend. These often have juxtaposed sections which move past each other in order to create the movement, usually in a vertical direction only. This lifts usually have limited capability in terms of weight and extension, and are most often used for internal maintenance tasks such as changing lightbulbs.

AWPs, by their nature, are designed for temporary works and therefore frequently require transportation between sites, or simply around a single site (often as part of the same job). For this reason, they are almost all designed for easy movement.

These usually smaller units have no motive drive and require external force to move them. Dependent on size and whether they are wheeled or otherwise supported, this may be possible by hand, or may require a vehicle for towing or transport. Small non-powered AWPs can be light enough to be transported in a pickup truck bed, and can usually be moved through a standard doorway.

These units are able to drive themselves (on wheels or tracks) around a site (they usually require to be transported to a site, for reasons of safety and economy). In some instances, these units will be able to move whilst the job is in progress, although this is not possible on units which require secure outriggers, and therefore most common on the scissor lift types. The power can be almost any form of standard mechanical drive system, including electric or gasoline powered, or in some cases, a hybrid (especially where it may be used both inside and outside). 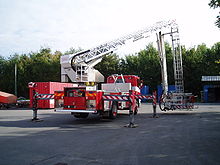 Some units are mounted on a vehicle, usually a truck or it can be mounted on a flat back pick up van known as a Self Drive),[3] though other vehicles are possible, such as railway cars. This vehicle provides mobility, and may also help stabilize the unit - though outrigger stabilizers are still typical, especially as vehicle-mounted AWPs are amongst the largest of their kind. The vehicle may also increase functionality by serving as mobile workshop or store.

Controls vary by model, but are frequently either buttons or a joystick. The type and complexity of these will depend on the functions the platform is able to perform. The controls can control features such as:

Aerial work platforms in use. 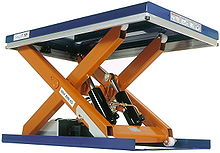 The majority of manufacturers and operators have strict safety criteria for the operation of AWPs. In some countries, a licence and/or insurance is required to operate some types of AWP. Most protocols advocate training every operator, whether mandated or not. Most operators also prescribe a range of pre-usage checks on the unit itself, and manufacturers recommend regular maintenance schedules.

Work platforms are fitted with safety or guard rails around the platform itself to contain operators and passengers. This is supplemented in most models by a restraining point, designed to secure a harness or fall arrestor. Some work platforms also have a lip around the floor of the platform itself to avoid tools or supplies being accidentally kicked off the platform. Some protocols require all equipment to be attached to the structure by its own lanyard.

Extreme caution must be taken when using AWPs in the vicinity of overhead power lines as electrocution may result if the lift comes in contact with energized wiring. Non-conductive materials, such as fiberglass, may be used to reduce this hazard.

AWPs often come equipped with a variety of tilt sensors. The most commonly activated sensor (especially with two people on a lift), will cause the machine to refuse to raise the platform beyond a certain height. Sensors within the machine detect that weight on the platform is off balance to such a point as to risk a possible tip-over if the platform is raised further. Another sensor will refuse to extend the platform if the machine is on a significant incline. Some models of AWPs additionally feature counterweights, which extend in order to offset the danger of tipping the machine inherent in extending items like booms or bridges. Some lifts are also fitted with sensors which will prevent operation if the weight on the platform exceeds the safe working load.

As with most dangerous mechanical devices, all AWPs are fitted with an emergency stop button or buttons for use in the event of a malfunction or danger. Best practice dicates fitting of emergency stop buttons on the platform and at the base as a minimum. Other safety features include automatic self checking of the AWPs working parts, including a voltmeter, which detects if the lift has insufficient power to complete its tasks (which will result in it refusing to operate for safety). Some AWPs provide manual lowering levers at the base of the machine, allowing operators to lower the platform to the ground in the event of a power or control failure or deliberate use of the machine (e.g. by unauthorized persons).

AWPs are often bought by equipment rental companies,[4] who then rent them out to construction companies or individuals needing these specialised machines. The market for these machines is known to be marked by especially strong boom and bust cycles, and after a great demand in the 1990s (with up to 70,000 AWPs sold per year in the US) the market crashed in the early 2000s, leading to a strong contraction amongst the manufacturers.[4][5] 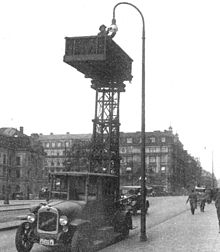 A 1920 version in Sweden, for work on public street lights.