Murwillumbah is a town of approximately 7,500 people in far north-eastern New South Wales, Australia in the Tweed Shire. It lies on the Tweed River, 848 km north-east of Sydney, 13 km south of the Queensland border and 132 km south of Brisbane. At the 2006 census, Murwillumbah had a population of 7,952 people.[1] The town's name is often abbreviated to M'bah[2], Murbah.[3], or Murbs.

Murwillumbah sits on the south eastern foothills of the McPherson Range in the Tweed Volcano valley. The area is quite hilly. Many of the buildings are art deco in style and there are a number of cafes, clothes and antique shops in the town. Murwillumbah was also nominated one of the top ten sea/tree change towns in Australia. Murwillumbah is the eighth town mentioned in the original Australia version of the song "I've Been Everywhere".

The area is also used for filming of the British reality series, I'm A Celebrity... Get Me Out of Here!, and has been since 2002. Versions of the show for other countries are also produced in the area. 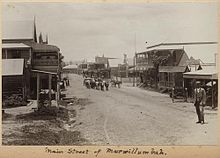 The first people to live in the area were Bundjalung people. The name Murwillumbah derives from an Aboriginal word meaning "camping place" – from Murrie, meaning "aboriginal people", Wolli, "a camp"; and Bab, "the place of". Nearby Mount Warning and its attendant national park are known as Wollumbin, meaning "Cloud Catcher", in the Bundjalung language.

Timber-getters were drawn to the region in the 1840s.[4] The river port at Tumbulgum was initially the main settlement. In 1902, a local government municipality was declared with Murwillumbah as its centre.[4]

Most of the town's business district was destroyed by fire in 1907.[5] Murwillumbah is the location for Australia’s largest-ever bank robbery which occurred in 1978 and has not been solved.[5]

Murwillumbah is protected by a series of levees,[6] however they do not protect all parts of the town in major floods. The worst flood to hit the town occurred in February 1954,[6] with another major flood in 1956.[5] In 1974, 200 people had to be evacuated from the town after floodwater from Tropical Cyclone Zoe inundated the area.[7] In January 2008, Murwillumbah and surrounding areas were hit by severe flooding.[8] May 2009 saw more evacuations in the town and surrounds after heavy rainfall.[9] 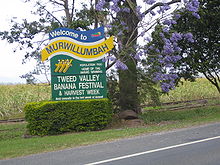 The town was bypassed by the Pacific Highway in August 2002. There is an inland road that passes along the Numinbah Valley through the towns of Chillingham, Numinbah and Natural Bridge which is scenic tourist drive. Another major road west of the town heads to Kyogle via the town Uki, and also passes near the town of Nimbin.

Murwillumbah was the terminus of the Casino-Murwillumbah branch line, and had daily train services to Sydney until the line was closed in 2004.

The major industry of the area, apart from tourism, is sugarcane growing. There were numerous tramways in the area serving the sugar mill at Condong.[10] There is also some dairy farming in the area. There are a number of alternative lifestyle retreats nearby as well, notably one belonging to the Hare Krishna religion.

The annual Tweed Banana Festival, the second oldest festival in Australia is staged in the town. In 2005, the festival celebrated its 50th anniversary.[11]

Since 2002 an annual historic motor racing festival has been run through the streets of Murwillimbah, featuring a parade through town a one kilometre hillclimb course and numerous connected events, attracting thousands of spectators. Modeled on the Goodwood Festival of Speed, Speed on Tweed was a highlight of the local calendar attracting cars and competitors from all over Australia and from Europe and North America. In September 2009 the event will be held in conjunction with Rally Australia which has scheduled one special stage in Murwillumbah.

Murwillumbah's schools cater to the various individual needs of students and their families.

Some Murwillumbah sports clubs include:

Notable people from Murwillumbah include: