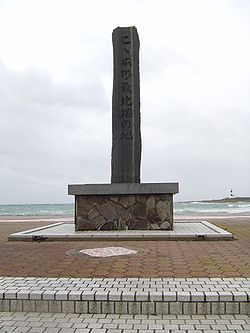 The most northerly point of Honshū

Ōma occupies the northwestern coastline of Shimokita Peninsula, facing the Tsugaru Strait. The town has a cold maritime climate characterized by cool short summers and long cold winters with strong winds. Much of the village is within the limits of the Shimokita Hanto Quasi-National Park. Ōmazaki (大間崎?) cape is the northernmost point on Honshū island.

The area around Ōma was inhabited by the Emishi people until the historical period. During the Edo period, it was controlled by the Nambu clan of Morioka Domain. During the cadastral reform of 1889, Ōoku Village was proclaimed from the merger of Ōma hamlet with neighboring Okudo hamlet. It was renamed Ōma Town on November 3, 1942. Ōma has been a popular location setting for movies and television dramas. It was the setting for the 1983 movie Gyōei no mure (魚影の群れ?) starring Ken Ogata. In 2000, Ōma was the setting for an NHK television series Watashi no Aoi Sora (私の青空?) starring Tabata Tomoko. This was followed by another fictional series Maguro (マグロ?) on TV Asahi starring Tetsuya Watari in 2007.

The economy of Ōma was traditionally heavily dependent on commercial fishing. The town was famous for its tuna, which was caught in the traditional manner by hand in two-person boats, and sold under the “Ōma” registered trademark. Other seafood products include sea urchin roe, konbu and squid.[1] The town is also the site of a nuclear power plant, the Ōma Nuclear Power Plant, which will be unique in its use of MOX fuel when it comes on line.[2]