Magna Steyr Fahrzeugtechnik AG & Co KG is an automobile manufacturer based in Oberwaltersdorf, Austria, with its primary manufacturing location in Graz. It is a subsidiary of Canadian-based Magna International and was previously part of the Steyr-Daimler-Puch conglomerate.

Magna Steyr engineers, develop and assemble automobiles for other companies on a contractual basis; therefore, Magna Steyr is not an automobile marque. In 2002, it absorbed Daimler AG's Eurostar vehicle assembly facility. The company's vehicle assembly capacity reached 200,000 vehicles a year. It is the largest contract manufacturer for automobiles worldwide,[1] and has several manufacturing sites, with its main car production in Graz in Austria.

Porsche had announced in June 2008 that the Boxster and Cayman models would be manufactured by Magna Steyr from 2012, but this contract was cancelled in December 2009 and transferred to Karmann, a German car assembly company which had recently been taken over by Porsche's parent company, Volkswagen.[8] 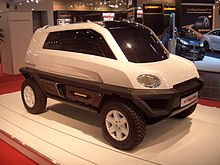 Magna Steyr created the Mila brand to differentiate its technology and research. Several concept cars have been shown at various motor shows.

At the Geneva Motor Show 2011, the fifth Mila concept car was presented: Mila Aerolight, a compact four-seater, powered by CNG.

The Mila EV was a plug-in electric vehicle concept[9] based on a modular lightweight platform, displayed at the 2009 Geneva Motor Show.[10]

The Alpin was a small, lightweight off-road vehicle for four passengers in a 3+1 seat arrangement announced at the 2008 Geneva Motor Show.[11] It had an unusual mid-engine layout and was based on a low-cost production concept.[12] It was 3540mm long, 1703mm wide and 1750mm high, with a 3-cylinder 1.0 L (999cc) engine in two versions; CNG natural gas or petrol. The petrol version was much lighter, with a weight of 906 kg.

Presented at the Geneva Motor Show 2007, the Mila Future is a sculpture with four roof options: coupé, landaulet, copster (a crossover between a coupé and a roadster) and roadster.

The showcar was presented at the IAA in Frankfurt in 2005 as a one-seater sportscar. The first prototype of the CNG-powered vehicle was built in 2006. And with Mila 2 followed the two-seater version.