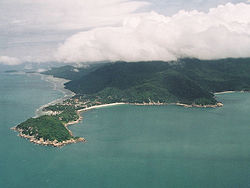 Ko Pha Ngan from the air 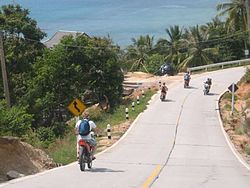 Exploring the island on mopeds 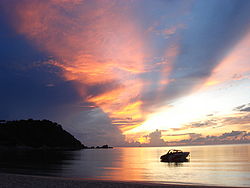 Ko Pha Ngan (or Koh Phangan, Thai: เกาะพะงัน, RTGS: Ko Pha-ngan, Thai pronunciation: [kɔ̀ʔ pʰa.ŋan]) is an island in the Gulf of Thailand in South East Thailand. It is famous for its full moon party at Haad Rin Beach and as a backpackers destination. Ko Pha Ngan has two sister islands: the larger Ko Samui to the south and the smaller Ko Tao to the north.

The Bronze Drum of Dongson Culture (500BC - 100BC) that was found on Ko Samui in 1977 is evidence that there were settlements of people on Ko Samui, Ko Pha Ngan, and their islets from more than two thousand years ago. Some historians and archaeologists believe that the first group who migrated to Ko Pha Ngan were the Muslim sea Gypsies (Pygmy, Semung, and Proto-Malay) who travelled by boat from the Malay Peninsula. However, nowadays there are few Muslims who live on the island. The name of Ko Pha Ngan comes from the word 'Ngan', the southern dialect meaning 'sand bar', for there are many sand bars offshore around the island. Ko Pha Ngan has been a long time favorite of past kings of Thailand. Specifically Rama V, or Chulalongkorn visited Ko Pha Ngan 14 times during his reign.

Originally the island was administrated from Ko Samui district. The minor district (King Amphoe) Ko Pha Ngan was established on October 1, 1970, then consisting of the two tambon Ko Pha Ngan and Ban Tai.[1] It was upgraded to a full district on April 12, 1977.[2]

The infamous Full Moon Party, which often involves electronic music, occurs on Ko Pha Ngan every full moon of the month. Recently, though, steps have been taken to make Ko Pha Ngan into a more family-friendly tourist destination. Several razzias and police raids on all beaches and on the streets at night and at daytime helps to prevent drug-abusing. Motorbike accidents are the rule because of drunken or drugged partygoers.[3]

Ace of Base in their new album "The Golden Ratio" mention Ko Pha Ngan in the song "Vision in Blue" .