Active Worlds (AW) is a 3D virtual reality platform. The Active Worlds client runs on Windows. Users assign themselves a name, log into the Active Worlds universe, and explore 3D virtual worlds and environments that other users have built. Users can chat with one another or build structures and areas from a selection of objects. AW allows users to own worlds and universes, and develop 3D content. The browser has web browsing capabilities, voice chat, and basic instant messaging. This integrated software can allow users to connect, explore, and gain a more in depth understanding of AW. Corporate and educational clients of Active Worlds can make use of the interaction, communication, and media to provide functional environments suited for their objectives.

The program's original goal was to be the 3D-equivalent of a 2D web browser (such as Internet Explorer or Firefox). Instead of creating a website, the user could construct an office, building, or area in which to display products or information.[citation needed]

The necessity for 3D art within Active Worlds to enrich one's world has led to the development of a market place for 3D models, textures, avatars (and associated animation sequences), and more. There is also plenty of free exchange of 3D content. There are also custom design services for 3D art available, especially avatars.

In the summer of 1994, Ron Britvich created WebWorld, the first 2.5D world where tens of thousands could chat, build and travel. WebWorld operated on the Peregrine Systems Inc. servers as an after hours project until Britvich left the company to join Knowledge Adventure Worlds (KAW) in the fall of that year. In February 1995, KAW spun off their 3D Web division to form the company Worlds Inc.[1] Britvich was eventually joined by several other developers, and the renamed AlphaWorld continued to develop as a skunk works project at Worlds Inc, internally competing with a similar project known internally as Gamma and publicly as Worlds Chat. While AlphaWorld was developing a strong cult following due in large part to Britvich's open philosophy of favoring user-built content, Worlds, Inc. favored Gamma for the company produced contract projects for Disney and others.[2]

On June 28, 1995, AlphaWorld was renamed Active Worlds (from Active Worlds Explorer) and officially launched as version 1.0. Around this time, Circle of Fire (CoF) was formed to create content for the Active Worlds universe. This company played a pivotal role in the future of the product. In January, 1997, Worlds Inc., after failing to secure needed contracts and having spent its venture investment of over 15 million dollars, laid off almost the entire staff of the company, keeping only several employees which included the author of Gamma, now known as WorldsPlayer. Active Worlds, never considered much of an asset by the company, became an object of struggle for those close to it. Eventually, it ended up in the hands of CoF, with most of the development team joining CoF until (in July 1997) internal disagreements caused most of the team and employees, including Britvich, to leave the company.

On January 21, 1999, CoF did a reverse merger with Vanguard Enterprises, Inc., which changed the company's name to Activeworlds.com, Inc. and, later, Activeworlds, Inc. Some of the original developers like Roland Vilett and Shamus Young (although Shamus Young had been involved as first an artist, then webmaster, and now developer since CoF took over) stayed involved with Active Worlds and development on the product continued for years, as it continues to have a following. In 2001, the company launched a new product called 3D homepages.[3] Each citizen account is entitled to one free 30 day trial of a virtual 10,000 square-meter 3D homepage, using their choice of layout from a selection of pre-designed styles. After the trial, the user has the option of upgrading to a larger size and user limit. These 3D Homepages are hosted for the user, unlike traditional worlds where the user would have to get their world hosted by another company or user, or themselves. Later, the 30 day free trial citizenship that came included with the 3D Homepage would be discarded.[4]

In 2002, the company, in an attempt to financially survive and turn a profit, increased the price of their yearly citizenships from $19.95 USD to $69.95 USD.[5] In September 2002, the company was sold back to its founders Richard Noll and JP McCormick and became a private company again. The company was renamed "Activeworlds, Inc." In January, 2006, Wells Fargo's Stagecoach Island[6] program was released, which used a pre-release version of the software. During that time, beta versions of Activeworlds 4.1 were available to registered citizens only.[7] On May 30, 2006, Activeworlds, Inc. commenced the rollout of the 4.1 version. Active Worlds routers did not last for long due to the extreme amount of users downloading the new 4.1 browser and a large amount of users in the new 4.1 universe. 4.1 was closed for a short time, while Active Worlds upgraded their equipment. On May 31, 4.1 was reopened and the release began again.[8] On June 1, 2006, Activeworlds, Inc. released the public world server version 4.1. While a normal amount of issues were reported for a massive software update, there are now over 700 worlds converted to 4.1. In late August 2006, a new product called Miuchiz was launched using the Active Worlds technology. This is a virtual world where users can enter as a Bratz or other character and interact with the world. In early 2008, Activeworlds, Inc. plans to release the first customer-oriented feature in years: the introduction of Customizable Avatars, similar to Second Life. The feature has been described as better than the competition's, with more options for easier customization. It will come in the next version of the browser, 4.2.[9] On June 16, 2008, Activeworlds, Inc. released the first major update to the browser in two years, version 4.2. The update was considered smooth and painless, being completed in a matter of only fifteen minutes, compared to the several days of version 4.1's initial upgrade in 2006. Version 4.2 includes an enhanced graphics engine, captured web pages on objects, and, most notably, customizable avatars.[9] On December 5, 2008, Activeworlds, Inc. renewed over 65,000 citizenships for a period of 30 days. In doing this, the company hopes to draw back some of the community that has been lost over the years. On June 24, 2009, Activeworlds, Inc., released an open beta of their next version, 5.0, for anyone to download and use.[10] Currently Activeworlds is on operating version 5.1[11] 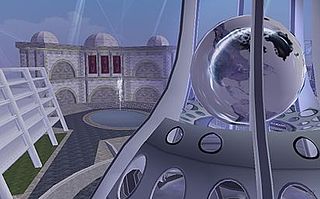 AWGate, the entry point for new users in the Active Worlds universe.

Building allows users to create their own environment. For example, a user may search an open area or request an open plot of land and then construct the walls of the building with sets of wall objects in a variety of shapes. The user may then decide to add windows, doors, furniture, landscaping, etc. The user can alternatively build with primitive objects and manipulate them to fit to the building or environment. Active Worlds supports objects stored as RenderWare script RWX (and the RW3+ binary equivalent DFF) and trueSpace objects COB, as well as DirectX X objects. The available objects are defined by the world owner using a directory of objects called an object path, accessible only by the person which owns the object path; it is not possible to upload custom objects to a public world. Builders must work with the available objects, or else purchase a private world.

Tourists, meaning those who have not bought a membership from ActiveWorlds, perhaps a guest; may build, but their builds are without any type of ownership and may be edited and deleted by anyone.[12] No one is allowed to encroach on territory that has been claimed by another user if the world contains a registry, a file containing size data for various types of objects.[13] Otherwise anyone can build on top of anyone else's property. (Claims are made by covering the desired area in objects, usually large ground cover objects.) Citizens who wish to build collaboratively can share their privilege passwords with one another. Entering another citizen's privilege password grants a citizen the right to modify their buildings. Any changes will be recorded in the name of the user whose privileges one is currently using.[14]

Communications in AW traditionally involve being within 200 meters from other people in the area and chatting. Users will quickly learn the common areas to chat, such as the starting location ("ground zero") when first entering a world. Citizens may also communicate with telegrams, which contact the user in any location. Telegrams are private (except to the universe administrator), and it is possible to send private messages to nearby users. All other chat is public. The 200 meter chat range can become a problem within large worlds and projects that span a larger area than 200 meters. To tackle this problem, bots (see below) can be programmed to broadcast chat to everyone in the current world. Currently some of the most common worlds, such as Alphaworld, has also a global chat, where users can communicate with each others anywhere on that world.

ActiveWorlds is divided into "worlds", contained environments for multiple users to communicate and, in some worlds, build in. Worlds in ActiveWorlds are either owned by ActiveWorlds itself or individual citizens, worlds can be purchased from ActiveWorld's website.[15] Worlds are constrained by their size, the size of the world being the amount of build-able land before you reach an invisible boundary where objects may not pass outside of.

World owners maintain a list of rights, which assign certain permissions to users within the world.[16] These lists contain all citizen numbers assigned that permission, or a '*' wildcard to indicate all users, including tourists, have that right. Users utilize a "worlds list", that lists all worlds within ActiveWorlds itself, clicking on a world in the list will teleport the user to the ground-zero of said world. The main ActiveWorlds universe has around 800 worlds as of April 2008. Though this is misleading as some worlds are extremely large and hold many communities and a sort of sub-worlds, other worlds are private and not always shown in the worlds list and many more seem to be un-used.

The largest world in the main ActiveWorlds universe is Alphaworld, which is also the first world. Alphaworld contains several more square kilometers of available space than the real-world state of California in the United States of America. To aid in navigating such a vast area you can teleport to a specified location, and users can maintain a teleport list, which could be compared to a browser's favorites list.

As with worlds, users can purchase their own private "universe", which may be a single stand-alone world, or a contained environment of multiple worlds, much like ActiveWorlds itself. Users must contact ActiveWorlds directly to purchase a universe. In addition, universes are limited by their total land mass and maximum simultaneous users online at one time, which is the total of landmass that each size of the world adds up to. As the ActiveWorlds platform evolves, universe owners must purchase universe server upgrades directly from ActiveWorlds, which is 40% of the universe purchase price after the first year of owning the universe.[17]

Bots are applications developed using the Active Worlds SDK. Some of these applications have been developed to allow users to automate simple tasks, such as weather, chat relay, giving tours and information, complex property management, and more. Games can be developed which interact with databases and other technologies to provide a basic, but extensible gaming platform. There are many other potential applications that can be developed using the SDK, for example, a program that automatically explores a world and creates a map, artificial intelligence through chat, and much more.