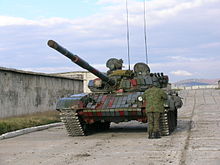 Essentially all anti-tank munitions (with the exception of HESH) work by piercing the armour and killing the crew inside, disabling vital mechanical systems, or both. Reactive armour can be defeated with multiple hits in the same place, as by tandem-charge weapons, which fire two or more shaped charges in rapid succession. Without tandem charges, hitting the same spot twice is much more difficult. 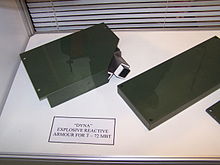 The idea of counterexplosion (kontrvzryv in Russian) in armour was first proposed by the Scientific Research Institute of Steel (NII Stali) in 1949 in the USSR by academician Bogdan Vjacheslavovich Voitsekhovsky (1922–99). The first pre-production models were produced during the 1960s. However, insufficient theoretical analysis during one of the tests resulted in all of the prototype elements being blown up.[citation needed] For a number of reasons, including the accident, as well as a belief that Soviet tanks had sufficient armour, the research was ended. No more research was conducted until 1974 when the Ministry of the Defensive Industry announced a contest to find the best tank protection project.

Similar work was carried out by a West German researcher, Manfred Held in 1967–69. For the first time, reactive armour, created on the basis of the German experience, was installed on Israeli tanks during the Arab-Israeli Conflict in 1982 and was judged effective. 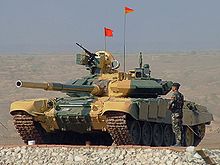 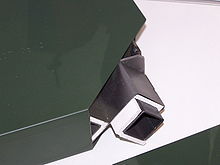 An element of explosive reactive armour consists of a sheet or slab of high explosive sandwiched between two plates, typically metal, called the reactive or dynamic elements. On attack by a penetrating weapon, the explosive detonates, forcibly driving the metal plates apart to damage the penetrator. Against a shaped charge, the projected plates disrupt the metallic jet penetrator, effectively providing a greater path-length of material to be penetrated. Against a long rod penetrator, the projected plates serve to deflect and break up the rod.

The disruption is attributed to two mechanisms. First, the moving plates change the effective velocity and angle of impact of the shaped charge jet, reducing the angle of incidence and increasing the effective jet velocity versus the plate element. Second, since the plates are angled compared to the usual impact direction of shaped charge warheads, as the plates move outwards the impact point on the plate moves over time, requiring the jet to cut through fresh plate material. This second effect significantly increases the effective plate thickness during the impact.

To be effective against kinetic energy projectiles, ERA must use much thicker and heavier plates and a correspondingly thicker explosive layer. Such "heavy ERA," such as the Soviet-developed Kontakt-5, can break apart a penetrating rod that is longer than the ERA is deep, again significantly reducing penetration capability.

Explosive reactive armour has been valued by the Soviet Union and its now-independent component states since the 1980s, and almost every tank in the eastern-European military inventory today has either been manufactured to use ERA or had ERA tiles added to it, including even the T-55 and T-62 tanks built forty to fifty years ago, but still used today by reserve units.

ERA tiles are used as add-on (or "appliqué") armour to the portions of an armoured fighting vehicle that are most likely to be hit, typically the front (glacis) of the hull and the front and sides of the turret. Their use requires that the vehicle itself be fairly heavily armoured to protect the vehicle and its crew from the exploding ERA; usually, ERA cannot be mounted on the less heavily armoured sides or rear of a vehicle.

A further complication to the use of ERA is the inherent danger to anybody near the tank when a plate detonates (disregarding that a HEAT warhead explosion would already present a great danger to anybody near the tank). Although ERA plates are intended only to bulge following detonation, the combined energy of the ERA explosive, coupled with the kinetic or explosive energy of the projectile, will frequently cause explosive fragmentation of the plate. The explosion of an ERA plate creates a significant amount of shrapnel, and bystanders are in grave danger of serious or fatal injury. As a result, infantry needs to operate some distance from vehicles protected by ERA in combined arms operations.

NERA and NxRA operate similarly to explosive reactive armour, but without the explosive liner. Two metal plates sandwich an inert liner, such as rubber.[1] When struck by a shaped charge's metal jet, some of the impact energy is dissipated into the inert liner layer, and the resulting high pressure causes a localized bending or bulging of the plates in the area of the impact. As the plates bulge, the point of jet impact shifts with the plate bulging, increasing the effective thickness of the armour. This is almost the same as the second mechanism that explosive reactive armour uses, but it uses energy from the shaped charge jet rather than from explosives.[2]

Since the inner liner is not explosive itself, the bulging is less energetic than on explosive reactive armour, and thus offers less protection than a similarly-sized ERA. However, NERA and NxRA are lighter and completely safe to handle (and safe for nearby infantry), can theoretically be placed on any part of the vehicle, and can be packaged in multiple spaced-out layers if necessary. A key advantage of this kind of reactive armour is that it cannot be defeated via tandem warhead shaped charges, which employ a small forward warhead to detonate ERA before the main warhead fires.

A new technology called electric reactive armour (also known as electromagnetic reactive armour, or colloquially as electric armour) is in development. This armour is made up of two or more conductive plates separated by some space or by an insulating material, creating a high-power capacitor.[3][4][5][6][7] In operation, a high-voltage power source charges the armour. When an incoming body penetrates the plates, it closes the circuit to discharge the capacitor, dumping a great deal of energy into the penetrator, which may vaporize it or even turn it into a plasma, significantly diffusing the attack. It is not public knowledge whether this is supposed to function against both kinetic energy penetrators and shaped charge jets, or only the latter. This technology has not yet been introduced on any known operational platform.