British replacement of the Trident system

British replacement of the Trident system 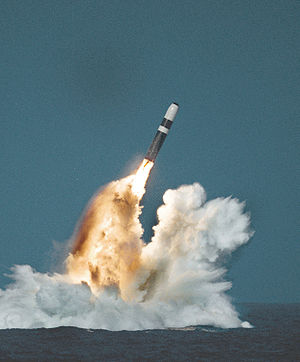 A Trident missile launches from a submerged submarine

The British replacement of Trident is a proposal to replace the existing Vanguard class of four Trident ballistic-missile armed submarines with a new class designed to continue a nuclear deterrent after the current boats reach the end of their service lives.[1] The government has begun planning a new submarine-based system[2] but there is opposition from those who want to take the opportunity for full nuclear disarmament or replacement with a cheaper, less capable nuclear weapon delivery system.[3][4][5] On 18 May 2011 the British government approved the initial assessment phase for the construction of new Trident submarines.

The term "Trident" is the name of the submarine-launched ballistic missile in British and American use that delivers a nuclear payload but is also widely used to refer to the UK's collective military nuclear system.[1][6]

Official policy regarding nuclear weapons is for use as a defensive nuclear deterrent. This refers to the possession of nuclear weapons to deter an enemy nuclear attack with the threat of a retaliatory second strike.

The current reasoning of deterrence is explained in the 1998 Strategic Defence Review (SDR):

We are committed to working towards a safer world in which there is no requirement for nuclear weapons and continue to play a full role in international efforts to strengthen arms control and prevent the proliferation of chemical, biological and nuclear weapons. However, the continuing risk from the proliferation of nuclear weapons, and the certainty that a number of other countries will retain substantial nuclear arsenals, mean that our minimum nuclear deterrent capability, currently represented by Trident, is likely to remain a necessary element of our security.
—[7]

Since the Manhattan Project produced the first nuclear weapons during World War II, the UK has worked closely with the United States on nuclear strategy. This cooperation was formalised in the 1958 Mutual Defence Agreement (MDA) and has been a key aspect of the special relationship between the two countries.

Since the retirement of the last Royal Air Force WE.177 nuclear bomb in 1998, the British nuclear system has been wholly submarine-based. This helps to deter a potential enemy because they cannot ensure eliminating the entire stockpile in a first strike if a ballistic missile submarine (Ship Submersible Ballistic Nuclear or SSBN) remains undetected.

Since the Strategic Defence Review, the UK has maintained a stockpile of around 200 warheads. In a policy known as "Continuous at Sea Deterrence", at least one Vanguard class SSBN is kept on patrol with up to 16 Trident missiles sharing up to 48 warheads from the stockpile at any given time. The SDR considered this was the minimum number of warheads adequate for deterrence. It is collectively known as the Trident system.[6] The majority of this system is based in Scotland at HM Naval Base Clyde, which includes the Faslane home of the Vanguard submarines and Coulport nuclear depot.

The oldest submarine of the Vanguard class is expected to remain in service until 2017[8] without a refit, prompting consideration of a replacement before the end of 2010 to allow for development time.[6]

A December 2006 Ministry of Defence white paper recommended that the nuclear weapons should be maintained and outlined measures that would do so until the 2040s. It advocated the currently preferred submarine-based system, as it remained the cheapest and most secure deterrence option available.

Costs for this option are estimated at £15–20 billion based on:

These cost estimates exclude the Vanguard 5 year life extension and decommissioning, and it is unclear if new Trident missiles will need to be purchased for the life extension programme.[8]

In 2009, Greenpeace estimated the 30 year lifetime costs of the proposal would be about £97 billion, including associated costs other than any Atomic Weapons Establishment costs.[9]

In 2011, Liam Fox said that the price for constructing the replacement submarines could rise to more than £25 billion, even without missiles, warheads or running costs.[10]

On 18 May 2011 the British government approved the initial assessment phase for the construction of new Trident submarines, paving the way for the ordering of the first long-lead items and preparations for the main build to begin in the future. The new submarine class will retain the current Trident II missiles, and will incorporate a new 'PWR3' nuclear reactor as well as technology developed for the Astute-class SSNs. The final decision whether to build 3 or 4 submarines will be taken in 2016. The cost for 4 boats is estimated to be £15-20 billion at 2006/7 prices and they will have a projected life span of over 25 years. [11]

In 2002, the US Navy awarded a contract for the Trident II D5 Service Life Extension Programme to extend the life of the missiles from the mid-2020s to about 2042, to match the extended life of the US Ohio class submarine. The UK will join this programme to arm a Vanguard submarine class replacement.

The paper suggested parts of the existing Trident system be refitted to some extent to prolong their lives. However, the relatively short (five years) life extension potential of the Vanguard class meant that a new class of SSBNs should replace it in the early 2020s. There are suggestions that the new fleet be cut to three hulls if a Continuous at Sea Deterrent patrol could still be assured at that number. The first SSBN would take 17 years to be designed and built, making a five year life extension of the Vanguard class necessary. On this basis, a refitted Vanguard class could still shrink by at least one vessel before the first replacement SSBN enters service.[2]

Both BAE Systems Submarine Solutions and Rolls-Royce Marine Power Operations are undertaking design studies for the new submarine class.[12] BAE presented two designs at DSEi 2007 labelled Concept 35 and Advanced Hull Form (AHF). Concept 35 is an evolution of the Vanguard-class with influences from the Astute-class.[12] Advanced Hull Form is a less conservative design which, rather than a standard tapered design of the stern, features a Y-shaped stern which houses much of the boat's machinery outside of the pressure hull.[13]

In March 2011 a safety assessment of the current Rolls-Royce PWR nuclear power plant design, by the Defence Nuclear Safety Regulator in November 2009, was released under a Freedom of Information request.[14] The Regulator identified two major areas where UK practice fell significantly short of comparable good practice, loss-of-coolant accident and control of submarine depth following emergency reactor shutdown.[15][16] For the replacement submarine the option of developing a new PWR3 plant based on current US design is under consideration, and in March 2011 Defence Secretary Liam Fox indicated this was the preferred option "because those reactors give us a better safety outlook".[17][18] In May 2011 the Ministry of Defence announced that the US design had been selected for the PWR3, at a cost of about £3 billion.[19]

The overall warhead stockpile would be reduced from around 200 warheads to 160. The remaining warheads are expected to last until the mid-2020s, with a decision to either replace or refurbish them taken closer to that time. The government-owned nuclear weapons research company Atomic Weapons Establishment would likely play a key role in either, with over £1 billion being invested between 2005 and 2008 to maintain "key skills and facilities."[20] The replacement of the Trident missiles was also deferred, as the UK intends to participate in a US programme to lengthen the missiles' lives from the 2020s through to the 2040s.[2]

The Royal United Services Institute (RUSI), a British defence and security think tank, released a paper in July 2010 assessing "four possible options for maintaining both an effective nuclear deterrent and also reducing costs in light of anticipated budget restrictions."[21] These proposals were motivated by the fact that funding for the Trident renewal programme must now come from the core MoD budget.[22]

The paper outlined four options consistent with the purposes of cost reduction:[23]

The paper concludes that "given the opportunity costs for conventional capabilities that current plans for Trident renewal are due to incur over the next decade...there is now a growing case for a re-examination of whether there are less expensive means of pursuing this objective. A key element of such a review is likely to be a reconsideration of the need to maintain a commitment to CASD in strategic circumstances that are now very different from those in which it was first introduced."[23]

On 14 March 2007, the Labour government won Commons support for the plans to renew the submarine system. The proposals were passed by the House of Commons by a majority of 248.[24]

Despite a clarification that the vote was just for the concept stage of the new system, 95 Labour MPs rebelled, and it was only passed with the support of the opposition Conservative Party.[24][25]

It was the first time MPs had been given the chance to vote on whether the UK should remain a nuclear power, and the biggest backbench rebellion since the beginning of the 2003 Iraq war.[24]

Another vote is anticipated before the order of the new submarine class in 2012.[25]

The Bradford Disarmament Research Centre has received funding for a review of the Government's reasons for replacing Trident,[26] aiming "to transform the intellectual agenda on Trident replacement through a detailed and critical examination of the government’s rationales for Trident replacement, a number of crucial issues excluded by the government and the wider implications of the decision, which require a full and balanced." 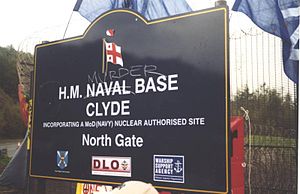 An anti-nuclear demonstration outside HM Naval Base Clyde

The possession of nuclear weapons, as a form of weapons of mass destruction, has long been criticised in British politics for being immoral, by members of the Campaign for Nuclear Disarmament and their supporters. As such, it has been at the core of the peace movement in the UK since the first introduction of nuclear weapons in the 1950s.

The Campaign for Nuclear Disarmament has historically been a significant anti-nuclear lobby group since its formation in 1957. As a result, the potential replacement of Trident has naturally been criticised by the CND, coming under their "Scrap Trident" campaign. More recently in 2006, 20 bishops claimed Trident was "anti-God." Other religious leaders, including Archbishop of Canterbury Rowan Williams, have questioned the morality of replacing Trident.[4][27]

Other groups claim the development of new nuclear weapons would undermine Britain's stance with other countries, such as Iran and North Korea, and international nuclear disarmament in general.[4][28] The UK government insists that there are no plans to enhance the capability of the missiles in terms of payload, range or accuracy, in order to avoid such diplomatic problems.[29]

Another reason cited is the claim that the nuclear environment has become less dangerous since the development of the deterrent during the Cold War. Consequently, with a diminished nuclear threat towards Britain, the value of having a deterrent to guard against it has fallen as well. The Ministry of Defence has a declared policy of sub-strategic use which would see, for example, a limited nuclear strike (e.g. one missile with one limited yield warhead) used as either a deterrent to a country from using chemical or biological weapons or as retaliation for having used them.[30][31][32]

Outspoken critics on this basis include former politicians Denis Healey[33] and Michael Portillo.[34]

Several groups, such as the Liberal Democrats, Plaid Cymru and Scottish National Party and some trade unions, prefer the money to be spent on public services or improved equipment for conventional forces.[5][35]

Greenpeace has claimed the recent £1 billion investment in AWE is for secret initial work on developing a replacement.[36]

In evidence to the House of Commons Defence Select Committee on 23 January 2007, the US nuclear expert Richard Garwin said that the plans were "premature and wasteful", and that delaying the decision for 15 years following inexpensive engine repairs would save £5bn. He added that pressure to commission a new fleet of submarines was rooted in the shipbuilding industry's urge to land lucrative contracts.[37]