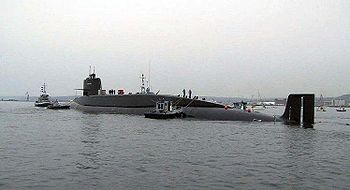 Artist concept of an SSBN launch

Ballistic missile submarines are larger than any other type of submarine, in order to accommodate SLBMs such as the Russian R-29 or the American Trident. Although some early models had to surface to launch their missiles, modern vessels typically launch while submerged at keel depths of usually less than 50 meters (164 feet).

Ballistic missile submarines equipped with nuclear warheads serve as the third leg of the nuclear triad. The invisibility and mobility of submarines offer both a reliable means of deterrence against an attack (by maintaining the threat of a second strike), and a surprise first-strike capability - particularly given the range of the weapons they carry.

In Britain, they are also known as SSBNs. (Ballistic missile submarines are referred to as "boomers".) The two crews are called "port" and "starboard" crew. Britain's nuclear deterrent is the Vanguard SSBN, which replaced the Resolution class submarine. A new project is under way to replace the Vanguard class submarine, under the designation Trident replacement.

The French Navy commissioned her first ballistic missile submarines as SNLE, for Sous-marin Nucléaire Lanceur d'Engin (lit. "nuclear-powered device-launching submarines"). The term applies both to ballistic missile submarines in general (for instance "British SNLE" occurs [2]) and, more technically, as a specific classification of the Redoutable class. The more recent Triomphant class is referred to as SNLE-NG (Nouvelle Génération, "New Generation").

The two crews used to maximise the availability time of the ships are called 'blue' and 'red' crews. 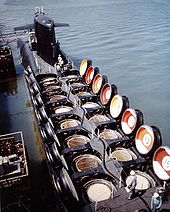