Bothrops atrox is a venomous pitviper species found in the tropical lowlands of northern South America east of the Andes.[1] No subspecies are currently recognized.[3] 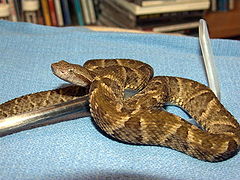 A terrestrial species, adults usually grow to total length 75–125 cm and are moderately heavy-bodied. Reports of the maximum size are not clear, as this species is often confused with B. asper. Soini (1974) mentioned that of a series of 80 specimens collected in northeastern Peru, the largest was a female of 138.8 cm. The largest specimen measured by Campbell and Lamar (2004) was a female with a total length of 162 cm.[2]

The color pattern is highly variable, including a ground color that may be olive, brown, tan, gray, yellow, or (rarely) rusty. The body markings are highly variable, as is the degree of contrast: in some specimens the pattern is very well defined, while in others it may be virtually absent. In general, however, the body pattern consists of a series of dorsolateral blotches that are rectangular or trapezoidal in shape and extend from the first scale row to the middle of the back. These blotches may oppose or alternate across the midline, often fusing to form bands. They also have pale borders, which in some cases may be prominent, and may be invaded from below by tan or gray pigment, occasionally dividing them into pairs of ventrolateral spots. The belly may be white, cream or yellowish gray, with an increasing amount of gray to black mottling posteriorly that may fade again under the tail. The head usually does not have any markings other than a moderately wide postocular stripe that runs from behind the eye back to the angle of the mouth. The iris is gold or bronze, with varying amount of black reticulation, while the tongue is black.[2]

The Spanish common name barba amarilla (yellow beard), an allusion to the pale yellow chin color, is also used in English. In Guyana it is called labaria[4] or labarria.[5] In Peru it is called aroani (Yagua), cascabel (juveniles), ihdóni (Bora), jergón, jergona, jergón de la selva, macánchi (Alto Marañón), machacú, marashar and nashipkit (Aguaruna names). In Venezuela it is called mapanare. In Colombia it is known as mapaná (Llanos of Vichada) and taya equis, in Peru as jergón.[2] The latter is an allusion to the x-like markings of the color pattern. In Ecuador these x-like markings have led to the snake simply being referred to as equis (the Spanish pronunciation of the letter 'x'). In Trinidad it is known as mapepire balsain.[6]

Found in the tropical lowlands of South America east of the Andes, including southeastern Colombia, southern and eastern Venezuela, Guyana, Suriname, French Guiana, eastern Ecuador, eastern Peru, Panama, northern Bolivia and the northern half of Brazil.[1] The type locality is listed as "Asia", which is obviously a mistake. Schmidt and Walker (1943:295) proposed that this be corrected to "Surinam."[1]

Despite the vast destruction of rain forests, it is amongst the most numerous of pit vipers and is not endangered. In Trinidad it prefers wet lowland forests.[7]

Although generally terrestrial, it is also an excellent swimmer and even climbs trees when necessary to reach prey. Generally nocturnal, but may forage at any time of the day if necessary. These snakes are also easily agitated.

The main diet includes most small mammals and birds, but also frogs and lizards. Larger prey is struck and released, after which it is tracked down via its scent trail.

Breeds year-round. After mating, females with developing embryos travel in and out of sunlight to keep them at a constant temperature. In equatorial regions, the gestation period is approximately 3–4 months, with an average of 60 young per litter. At birth the young are about 30 cm in length, more brightly colored than adults, and have yellow or beige tails.

These snakes are known to search for rodents in coffee and banana plantations. Workers there are often bitten by the snakes, which can lie camouflaged for hours, nearly undetectable, and strike with high speed.

Their venom consists mostly of Hemotoxin. Presently, treatment is usually possible if the victim receives medical attention soon enough.[8] Venom yield averages 124 mg, although it may be as much as 342 mg. Commonly, bites from this snake to humans cause symptoms including nausea, blackouts, and paralysis. In almost all cases, temporary or sometimes permanent loss of local or 'short term' memory were reported. Extended hospital stays, as well as weight loss of up to fifteen pounds have been reported. There is one case on racord of two people dying from one bite of the Fer-de-Lance. A cane field worker had been bitten. His wife, in trying to wash the wound, had the misfortune of having some of his blood enter through the cane cuts on her hands, and both died.

The enzyme, reptilase (batroxobin), derived from this snake's venom is used in modern medical laboratories to measure fibrinogen levels and to measure blood coagulation capability. The test is considered to be a replacement for Thrombin Time, and is used when heparin is present in the sample. The enzyme is unaffected by heparin.[9]

The taxonomy of this species is controversial; it may include B. leucurus the B. moojeni, and some of its populations are sometimes said to be separate species. B. asper was formerly included in this species, but most authorities now consider it distinct.