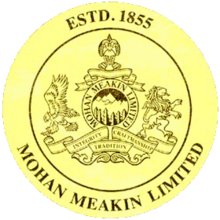 Mohan Meakin is a large group of companies started with Asia's first brewery incorporated in 1855 (but established much earlier) by Edward Dyer at Kasauli in the Himalayan Mountains in India under the name Dyer Breweries.

In the late 1820s, Edward Dyer moved from England to set up the first brewery in India (later incorporated as Dyer Breweries in 1855) at Kasauli in the Himalayan Mountains. The Kasauli brewery launched India's and indeed Asia's first beer, Lion, which was in great demand by the thirsty British administrators and troops stationed in the sweltering heat of India. Lion was much appreciated as a beer, and one famous poster featured a satisfied British Tommy declaring, "as good as back home!".

The brewery was soon shifted to nearby Solan (close to the British summer capital Shimla), as there was an abundant supply of fresh springwater there. The Kasauli brewery site was converted to a distillery, which Mohan Meakin Ltd. still operate. Dyer set up more breweries at Shimla, Murree (Murree Brewery), Rawalpindi, Mandalay, Quetta and acquired interests in the Ootacamund Brewery (South India).

Another entrepreneur, H G Meakin, moved to India and bought the old Shimla and Solan Breweries from Edward Dyer and added more at Ranikhet, Dalhousie, Chakrata, Darjeeling, Kirkee and Nuwara Eliya (Ceylon). After the First World War, the Meakin and Dyer breweries merged and in 1937, when Burma was separated from India, the company was restructured with its Indian assets as Dyer Meakin Breweries, a public company on the London Stock Exchange.

Following independence, N.N. Mohan raised funds and travelled to London where he acquired a majority stake in Dyer Meakin Breweries. He took over management of the company in 1949 and built new breweries at Lucknow, Ghaziabad and Khopoli (near Bombay). The company name was changed to Mohan Meakin Breweries in 1967 (the word "Breweries" was dropped in the eighties as the company diversified into other industries).

On the death of N.N. Mohan in 1969, his eldest son Colonel V.R. Mohan took over as Managing Director. He introduced a number of new products that are brand leaders today but died in 1973, soon after taking the helm. In the 1970s the manufacturing activities of the company were diversified into other fields including breakfast cereals, fruit juices and mineral water under the leadership of Brigadier(Dr.)Kapil Mohan V.S.M link title (Col. V.R. Mohan's brother). Subsequently the word brewery was dropped from the company name in 1982 to remove the impression that the company was engaged only in beer making. New breweries were built during the seventies and eighties at Chandigarh, Madras, Nepal and Kakinada near Hyderabad.

Lion Beer is the main brand first sold by Dyer Breweries in the 1840s. Lion was originally an IPA (India Pale Ale - which makes it the oldest IPA brand still in existence) but the beer style was changed in the 1960s to a lager. Lion remained the number one beer in India for over a century from the 1840s until the 1960s. After this another Mohan Meakin brand, "Golden Eagle", took the number one spot until the 1980s, when Kingfisher became number one. By 2001, Lion sales had declined substantially and Lion was only available to the Indian Army through the CSD (Canteen Services Department). Mohan Meakin then entrusted the marketing of their original beer to International Breweries Pvt. Ltd. The brand has since been relaunched in the north Indian market. With a new label design and marketing campaign, Lion has established itself once more in the civilian market and is now expanding into markets across India.

Lion earns a place in history as Asia's first beer brand. Lion's popularity with the British during the heyday of the Empire led to the start-up of other Lion beers around the world, in New Zealand, South Africa and elsewhere. Lion remains the number one brand in neighbouring Sri Lanka where Mohan Meakin had introduced it in the 1880s through their Ceylon brewery.

Old Monk is a vatted Indian Rum, blended and aged for 7 years (though there is also more expensive, 12 year old version). It is dark, with an alcohol content of 42.8%. It is produced by Mohan Meakin, based in Mohan Nagar, Ghaziabad, Uttar Pradesh.

It is available in all parts of India. Old Monk is also the third largest selling Rum in the world. Old Monk has been the biggest Indian Made Foreign Liquor (IMFL) brand for many years.[1]