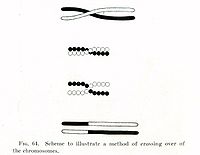 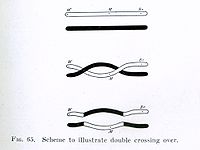 A double crossing over

Recombination involves the breakage and rejoining of parental chromosomes

Chromosomal crossover (or crossing over) is an exchange of genetic material between homologous chromosomes. It is one of the final phases of genetic recombination, which occurs during prophase I of meiosis (pachytene) in a process called synapsis. Synapsis begins before the synaptonemal complex develops, and is not completed until near the end of prophase I. Crossover usually occurs when matching regions on matching chromosomes break and then reconnect to the other chromosome.

Crossing over was described, in theory, by Thomas Hunt Morgan. He relied on the discovery of the Belgian Professor Frans Alfons Janssens of the University of Leuven who described the phenomenon in 1909 and had called it 'chiasmatypie'. The term chiasma is linked if not identical to chromosomal crossover. Morgan immediately saw the great importance of Janssens' cytological interpretation of chiasmata to the experimental results of his research on the heredity of Drosophila. The physical basis of crossing over was first demonstrated by Harriet Creighton and Barbara McClintock in 1931.[1]

In most eukaryotes, a cell carries two copies of each gene, each referred to as an allele. Each parent passes on one allele to each offspring. An individual gamete inherits a complete haploid complement of alleles on chromosomes that are independently selected from each pair of chromatids lined up on the metaphase plate. Without recombination, all alleles for those genes linked together on the same chromosome would be inherited together. Meiotic recombination allows a more independent selection between the two alleles that occupy the positions of single genes, as recombination shuffles the allele content between homologous chromosomes.

Recombination results in a new arrangement of maternal and paternal alleles on the same chromosome. Although the same genes appear in the same order, the alleles are different. In this way, it is theoretically possible to have any combination of parental alleles in an offspring, and the fact that two alleles appear together in one offspring does not have any influence on the statistical probability that another offspring will have the same combination. This theory of "independent assortment" of alleles is fundamental to genetic inheritance[4].

However, the frequency of recombination is actually not the same for all gene combinations. This leads to the notion of "genetic distance", which is a measure of recombination frequency averaged over a (suitably large) sample of pedigrees. Loosely speaking, one may say that this is because recombination is greatly influenced by the proximity of one gene to another. If two genes are located close together on a chromosome, the likelihood that a recombination event will separate these two genes is less than if they were farther apart. Genetic linkage describes the tendency of genes to be inherited together as a result of their location on the same chromosome. Linkage disequilibrium describes a situation in which some combinations of genes or genetic markers occur more or less frequently in a population than would be expected from their distances apart. This concept is applied when searching for a gene that may cause a particular disease. This is done by comparing the occurrence of a specific DNA sequence with the appearance of a disease. When a high correlation between the two is found, it is likely that the appropriate gene sequence is really closer.[4]