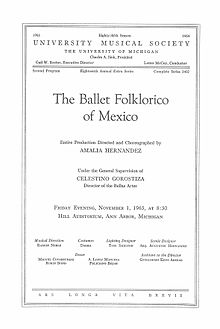 Ballet Folklórico de México is a folkloric ballet ensemble in Mexico City. For five decades it has presented dances in costumes that reflect the traditional culture of Mexico. The ensemble has appeared under the name, Ballet Folklórico de México de Amalia Hernández. The women usually go bare foot while dancing. History and traditions When it comes to Mexicans, it is little known that they are mostly mestizos, or of indigenous and European bloodlines. And Mexico has long been influenced by the many different cultures that still exist today: African, French, Spanish, Asian, German, Irish, Italian and more. Many of the descendents' names are not recognized as such because they are now pronounced with Mexican accents, and just as in the United States, some names were modified. Here are some examples: Duran, Obregon (O'Brien), Guzman (Gussman), Grimaldo, Garibaldi.

From the group's founding by Amalia Hernández in 1952, the group grew from eight performers to a fifty piece ensemble by the end of the decade. In 1959 the group officially represented Mexico at the Pan American Games in Chicago, United States.

In 1963 Guillermo Keys-Arenas was the Assistant to the Director of Ballet Folklorico de Mexico, while in 1969 he was its Artistic Coordinator.[1]

The ballet works and musical pieces reflect various regions and folk music genres of Mexico. Many of the ensemble's works reflect the traditions of indigenous Mesoamerican culture. Numbers of performers in individual dance numbers range from two to over thirty-five. Under Amalia Hernández the group was a pioneer of Baile Folklórico in Mexico. It is practiced by many people in America as well as Mexico.[2][3]

The ensemble performs three times weekly at the Palace of Fine Arts in Mexico City. Additionally, it has toured widely in the United States and has appeared in over 80 other countries.

Just as in the U.S., where scenery and culture changes because of the different races settling there, so does Mexico. The following surveys folklore traditions in Mexican states from the North, South, Central, East and West to give an indication of many diverse influences, styles and costumes.

Nuevo Leon is a northern state that borders Texas. When the Germans came, they settled mostly in the Texas hill country and Nuevo Leon. Unlike the hill country Germans who were mostly agricultural, the latter settled in Nuevo Leon to also establish breweries. Their influence in Texas country-western music and Tejano music is unmistakable but often overlooked. In the folklorico costume for Nuevo Leon, men wear the leather fringed vests or coats, boots, bandanas and cowboy hats. The women wear clothes straight out of "The Sound of Music". Their hair is braided with ribbons. The style of dance: polkas, waltzes and chotize, or "schottische". The tuba sound in Mexican/Tejano music was improvised by base guitars and the accordion was introduced. The accordion in Tejano conjunto music was mostly used by the common labor working people; not to be confused with Tejano orchestra music which was influenced by mariachis and the big band sounds of the 40s considered to be more urbanized. Much of the original Tejano music was based on ballads or corridos from Mexican revolutions; another oral history form, such as: Adelita, Tiempos Amargos, El Cuartelozo.

The Spanish influence in this eastern coast state is stark, as it was in early Tejas when Spaniards were issued large land grants as rewards. It was and still is an important trading port. The Spanish costume shows the white guayabera pants and shirts and red waist sash and straw hat. The women wear imported white lace dresses; their hair up in buns in a comb and shawls, or rebozos, accompanied by fans. The style of dance: bambas, and huapangos, which are greatly influenced by flamenco steps. The music is mostly acoustical, violin and harp, which were influenced during the conquest and also penetrated by elements of the Arab, African, German, Dutch, and other European cultures. The African peoples who arrived during the Spanish colonization period as slaves, mainly to the coastal regions in the south of the country contributed greatly to the tropical rhythm. Finally, note the secondary influence of inhabitants of the Caribbean islands, South American countries, the Southern states of the U.S., and some of the European countries which had a direct or indirect intervention in the early history of Mexico. Spanish names mostly replaced indigenous names.

The Spanish colonized this area for an extended time. The men wore the big sombreros and the traditional Spanish charro suit with the silver studs on the pants and a big bow. The women folklorico wear is a ranchero design dress with unmistakable Indian influenced bright colored ribbons. This is the national representation for Mexican dance as is the Mexican hat dance which comes from this state. Jarabes, which means "sweet syrup," are best known as many of the dances are those of courtship and very flirtatious. This is also the birthplace of los mariachis -- the orchestras with trumpets, acoustics, violins.

This is a small southwestern state which was once a part of Jalisco. The men wear the traditional white shirt under a colored shirt that is tied in the front and white pants with bandanas on their heads. The women dress in a small flower print ranchera style outfit and use a Huichol fan instead of a rebozo or shawl like the Jalisco women wear. Interesting to this state is the dance of the matchetes, where men dance clanging and tossing their matchetes to the point of making sparks. This is done while women dance through and arch of clanging matchetes. This dance is originally of Moorish influenced, originating when Spain was conquered by the Moors. The Moors influenced not only the music (compare Spanish falsetto to Arab falsetto) but also the appearance of Spaniards as they introduced the olive skin and dark hair and eyes into the European bloodlines. The women dance in the flamenco style with their arms held high, arched upperback, low side bends and twists, coy shoulder shrugs and saucy head tilts. There is also a Mexican folk dance honoring St. James that is in reference to a battle with Moors.

Guerrero is a tropical state on the Pacific coast. It was not only a haven to Asian influences that strayed and landed on its coast, but also a haven for run-away black slaves. In a presentation coordinated by the state of Guerrero, I witnessed a dance that looked like an old cliché about Africans dancing around a fire and being chased by a tiger. This was one of the folk dances archived by African slaves. The Africans also brought us the drum rhythms of cumbias and salsas. The Spanish slave trade distributed the sound in all of the Latin countries. I also heard a very Mexican sounding music from a line-up of Mexicans dressed in the traditional white pants and shirt, palm weave hat and huaraches. The women wore a shift dress with embroidered flowers, and their hair up in a bun. What was different? One appeared European looking; one black; one Asian; one Indian; and one was mestizo... the Mexican melting pot.

Michoacan is largely inhabited by indigenous people. Unlike many of the Mexican Indian tribes, women are allowed to dance. The men wear the muslim white pants and shirts embroidered at the legs and arms with a sash, a poncho, and huaraches. The women wear a black skirt and multi-colored apron with a white embroidered shirt. They wear a long black head wrap tied behind their head with a staw hat sometimes adorned with multi-colored flowers. Most famous to that region is El Baile de Los Viejitos or Dance of the Old Men. This was a chance to mock the Spanish ruling class by doing a dance hunched over like old men with canes. They would wear a mask looking like an old European (pink face with white hair). This dance is customarily done during festivals like El Dia de los Muertos. This is a missionary influenced holiday in which the padres allowed the Indians to celebrate their Indian rituals of honoring the dead by combining it with All Souls Day. Indians believed that it would be a day when their dead's souls would come back to earth to savor earthly delights. Therefore, they would (and still practice) bring some of the dead's favorites and wait at the cemetery for their loved ones. This has also become a day for family to customarily gather, pray, reminisce and bond.

Yucatan is another Spanish trade port and Mayan kingdom conquest on the Gulf of Mexico. The Spanish and Mayan influence on wear is again notable. The same white guayabera shirt and pants and red bandana for men. The women wear a Mayan design dress trimmed in white lace brightly embroidered with flowers, wearing shawls. Their hair up in combs. The music is acoustical and includes drums and tuba. The Mayan people are still very visible in this state.

While the majority of the Mexican population is now mestizo, one must not forget that there are still several different Mexican Indian tribes. The more famous are the Aztec and the Mayan, but there are numerous others like the Huichol, and the Chichimeca Jonazj. Though Spanish is the official language of the country, in Mexico there are 62 living indigenous languages. The centrally located silver mine state of San Luis Potosi is one which has a large percentage of Huastec Indians. It is well known for its silver mines and textiles. Note the Indian colored ponchos the women wear with the yarn woven headpiece. Marital status of women is known by the length of the ribbons that dangle in the back of the headpiece. If she is available, the ribbons are long and worn cut short when married.

Another well-known costume for women is La China Poblana; a silk/satin skirt with an embroidered or sequined Mexican eagle that pays homage to a woman whose legend tells of a Euro-Indian princess. Although not actually Chinese, the princess was rumored to have been born in Mongolia. She was said to have been attacked by Pacific pirates and sold to a marquis in Mexico as a slave. Legend notes that he paid a high price for her and although originally bought her as a "trinket" to decorate his palace, he grew to treat her as a daughter. Originally of Hindu faith, she embraced the local customs. According to the story, she would always wear a head scarf and covered her face, thus gaining the respect through her loyalty, modesty and beauty both from the pueblo and the clerics. Puebla is also known for the beginning of the Cinco de Mayo celebration in which the Mexican patriots overthrew the French at the Battle of Puebla in 1862.[4]