See HEMA (disambiguation) for other uses.

HEMA (originally an acronym for Hollandsche Eenheidsprijzen Maatschappij Amsterdam, "Dutch Standard Prices Company Amsterdam") is a Dutch dimestore chain. It was part of the Maxeda company until June 2007, when it was bought by Lion Capital LLP. The chain is characterized by relative low pricing of generic housewares, which are mostly made by and for the chain itself, often combined with original design.

The first HEMA opened in Amsterdam on 4 November 1926, set up by the Jewish owners of the luxury department store De Bijenkorf. Originally, as a price-point retailer at prime locations in town centers, goods were sold using standard prices (hence its name), with everything having a Standard price of 10, 25 or 50 cents, and later also 75 and 100 cents. The relative economic boom in the Netherlands in the period 1900-1930 benefited HEMA.[citation needed]

After World War II, this model could not be sustained and the standard pricing system was abandoned. But a period of rapid expansion followed: now almost every town of any importance in the Netherlands has a HEMA. Locations carry a wide variety of goods, including clothing, food, bicycle equipment, gardening tools, and office supplies. As of 2010, standard pricing was reintroduced.[1]

HEMA prides itself in developing much of its articles itself, including food and books. On its website HEMA says it develops all its articles itself[2]. The website also stresses that the total offer is concentrated on daily necessities.

Some well-known HEMA products in the Netherlands are

HEMA has chosen a no-nonsense formula with strong house-branding. Quality standards are relatively high. HEMA organizes their own yearly design-contests.[4]

HEMA was the company to introduce franchising in the Netherlands. How many of its shops are franchised is unknown.[citation needed] 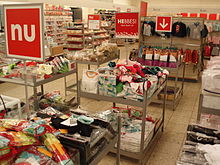 Inside a HEMA store

Since the 1990s, HEMA has also expanded into neighboring countries.

HEMA branches by country per 2011:

In 2011, the Belgian HEMA store in Genk first allowed, then barred a muslim girl from working with customers wearing a head scarf. In a press release, the store's management said avoiding political or religious statements and keeping a strictly neutral course would be policy from then on.[5] This was applauded by ultra-right wing politician Filip de Winter, who then called the Belgian public to go and buy warm sausage at the HEMA - but that product is not sold outside the Netherlands.[citation needed]

During WWII, a number of Jewish employees (there were a relatively high number because of the Jewish roots of the company) were murdered by the Nazis, which is remembered yearly by laying a wreath on May 4th, the Dutch Remembrance of the Dead, at the head office.