The Dukes of Hazzard (film)

The Dukes of Hazzard (film)

The Dukes of Hazzard is a 2005 comedy film based on the American television series of the same name. The film was directed by Jay Chandrasekhar and released on August 5, 2005 by Warner Bros. Pictures. As in the television series, The Dukes of Hazzard depicts the adventures of cousins Bo, Luke, Daisy and their Uncle Jesse as they outfox crooked Hazzard County commissioner Boss Hogg and Sheriff Rosco P. Coltrane. The film was followed by a direct-to-video prequel titled The Dukes of Hazzard: The Beginning in 2007. This film was the debut of pop singer Jessica Simpson as an actress. The film received overwhelmingly negative reviews from film critics and was declared as one of the worst films of 2005.

After Coltrane has the General Lee wrecked during Bo's attempt at winning his fifth consecutive local road rally, Billy Prickett (James Roday), a famous stock-car driver, enters Hazzard to participate in the rally. Meanwhile, Coltrane plants a fake moonshine still ("'cause he's too damn dumb to find the real one") in Uncle Jesse's barn and seizes the Duke property in the interest of eminent domain for Boss Hogg, forcing the family to temporarily reside with neighbor and Uncle Jesse's love-interest, Pauline (Lynda Carter). Pauline informs the Dukes that Rosco seized another farm on charges so Bo and Luke investigate a local construction site and find geologic core samples with the help of bait-shop owner Sheev (Kevin Heffernan). Meanwhile, Coltrane makes arrangements to seize the General Lee as "evidence" from the local auto body shop run by the Dukes' friend Cooter (David Koechner), who instead turns the car into a hot-rod and applies a new paint job and horn, in return for finally getting payment for all the work he has done ("...'cause that's how this works.") for the boys in the past, when Bo wins the Rally. 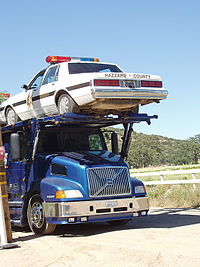 After retrieving the General Lee before Rosco can, the Dukes go to Atlanta to visit a local university geology lab, meeting up with Katie-Lynn Johnson (Nikki Griffin), a Hazzard county girl and the Dukes' love interest, and her roommate Annette (Jacqui Maxwell). At the lab, they discover Boss Hogg's intentions of turning the county into a strip coalmine. They are later arrested after running from campus police. Back in Hazzard, Daisy learns, with the help of Sheriff Deputy Enos Strate (Michael Weston), that Billy Prickett has been hired by Boss Hogg to participate in the Rally as a ringer. Boss Hogg then heads to Atlanta where he informs the Duke boys, in lock-up, that they are too late to stop him and reveals that the vote on Hogg's proposition is at the same time as the rally, explaining Billy Prickett's involvement. During a transfer from detainment, Daisy helps the boys escape and they speed home to try and inform the townsfolk.

Upon returning home, the Dukes discover that Rosco has taken Uncle Jesse and Pauline hostage, an obvious trap for the boys, and that Billy is in on the scheme because he's ashamed of the town's low status. The two race to the farmhouse to cause a distraction while Daisy and Cooter rescue Jesse and Pauline. Meanwhile, the college girls head to the rally with Sheev to inform the townsfolk about the vote on the strip-mining ordinance. Because of Sheev's armadillo hat and lack of pants, no one listens, so Bo leaves for the rally while Luke and Jesse team up to foil the police who are chasing Bo, interfering with the race. Upon crossing the finish line first, before Billy, the two continue racing back and forth all the way into town, leading the townsfolk to the courthouse just in time to vote against Hogg's proposed ordinance. At the courthouse, Daisy takes advantage of the governor of Georgia's presence and TV cameras to convince him into pardoning the boys, so Uncle Jesse takes the opportunity to knock out Boss Hogg and gets a pardon for assaulting a county commissioner at the same time.

The film ends with a cook-out at the Dukes' house where Pauline convinces Uncle Jesse, who could not be found because he was "using the meat smoker," to get up and play the television series' main theme. Bo and Luke are romantically involved with the girls in the General Lee when they are caught by Luke's other love-interest Laurie Pullman (Alice Greczyn) from the intro of the film, who proceeds to chase them with a shotgun as they drive away. 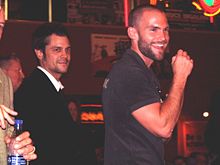 Knoxville and Scott at the premiere

All five members of the comedy film troupe Broken Lizard make appearances in the film, classified cameos except for Kevin Heffernan who had a larger speaking role (Sheev). Additionally, Lynda Carter had previously appeared in a cameo in Super Troopers, while Willie Nelson would later appear in a cameo at the end of Beerfest.

Knoxville said he was initially reluctant to take on the role but was persuaded by script changes and the presences of Dan Bradley as stunt coordinator and second unit for the car chase scenes. Knoxville praised him saying "everyone in Hollywood wants Dan Bradley to shoot their car stuff".[3]

The majority of the film was shot in and around Clinton, Louisiana.

The street scenes are set in Atlanta but filmed in the New Orleans Central Business District, and the University scenes on the campus of Louisiana State University.

The film was #1 at the box office its opening weekend and grossed $30.7 million on 3,785 screens. It also had an adjusted-dollar rank of #14 all-time for August releases.[4]

The film eventually collected $110.5 million worldwide, although it was much less successful financially outside the U.S.

The Dukes of Hazzard was panned by most professional film critics. Roger Ebert gave the film one star, calling it a "lame-brained, outdated wheeze" and wondered that Burt Reynolds' part in the film is "karma-wise... the second half of what Smokey and the Bandit was the first half of".[5] Ebert also named it the second worst film of the year and went on to place it on the list of his most hated films.[6] Richard Roeper named it the worst film of 2005.

Only 14% of critics gave the film positive reviews on Rotten Tomatoes, based on 160 reviews.[7] The film received an average rating of 33% on Metacritic based on 36 reviews.[8]

At the 26th Golden Raspberry Awards, the film received seven nominations, but didn't win any.

At the People's Choice Awards, Simpson won the "Favorite Song from a Movie" award for her cover of Nancy Sinatra's "These Boots Are Made For Walkin'".

Simpson won the Choice Breakout Female award for her role in the film at the Teen Choice Awards.

Before the release of the film, Warner Brothers was forced to pay &17.5 million to the producer of Moonrunners, the movie that inspired the tv show. This was soon followed by a claim from screenwriter, Gy Waldron. The Hollywood Reporter reported that James Best, who portrayed Rosco P. Coltraine in the original series filed suit in late July 2011 over royalties he was contracted to receive over spinoffs that "used his identity". [9] Ben Jones, who played Cooter Davenport in the original series, criticized the film for its emphasis on sexual content, suggesting that the original series was more family-oriented and not as sexualized.[10] He called for fans of the TV series to boycott the film "unless they clean it up before the August 5th release date."

Some have countered that the original series also contained sexual themes, primarily Catherine Bach's (Daisy Duke) much-displayed "short shorts" (which have become so ubiquitous in American culture that skimpy blue jean cutoff shorts are now often simply called "Daisy Dukes"). In a film review, a New York Daily News entertainment columnist said the movie's sex humor is "cruder" than the TV series, but that it is "nearly identical to the TV series in... its ogling of the posterior of cousin Daisy Duke."[11]

John Schneider, who played Bo Duke in the original TV series, was asked if he saw the film and said: "My gosh... it was terrible! It wasn’t Dukes. It was true to whatever it was; I just don’t know what that was!"[12]

Main article: These Boots Are Made for Walkin'#Jessica Simpson version

Jessica Simpson recorded her own version of "These Boots Are Made for Walkin'" (and added her own lyrics) for the soundtrack to the film The Dukes of Hazzard (2005). Performed from the point of view of her character in the movie, Simpson's cover was co-produced by Jimmy Jam and Terry Lewis, and was released as the soundtrack's first single in 2005. It became Simpson's fifth top-twenty single in the United States and its music video drew some controversy because of its sexual imagery.[13][14]

A prequel to the film, titled The Dukes of Hazzard: The Beginning, was released to television on March 4, 2007, and released to DVD on March 20, 2007.