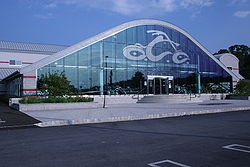 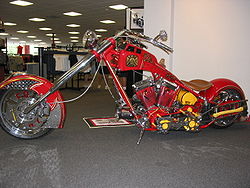 Orange County Choppers (OCC) is a custom and production motorcycle manufacturer based in Orange County, New York, that was founded by Paul Teutul, Sr., and Paul Teutul, Jr., in 1999. The company was featured on American Chopper, a reality TV show that debuted in September 2002 on the Discovery Channel, which has contributed to the company's quick rise to fame. In 2007, Discovery Channel's sister channel TLC picked up the series in the United States and Canada. A new international headquarters designed to combine their production and retail facilities was constructed in the Town of Newburgh and opened April 24, 2008.

OCC's production facility was initially located in the hamlet of Rock Tavern, it then later moved to nearby Montgomery before moving into its new headquarters in Newburgh. The company also operates a seasonal kiosk at the Woodbury Commons Outlet Mall in Central Valley, NY.

OCC started as a sideline to the family's steel manufacturing enterprise, Orange County Iron Works, which was founded in the 1970s. In the late 1990s, Teutul Sr. began manufacturing custom motorcycles as an extension of his steel business, and in 1999 he founded Orange County Choppers. The company's first bike, "True Blue", was debuted at the 1999 Daytona Biketoberfest.

Minority owner/chief designer and fabricator Paul Teutul, Jr. was fired from the shop in late 2008. In January 2009, TLC served a notice of default due to Paul Jr.'s absence. Paul Jr. then returned to OCC briefly as a contractor, but left for good in April 2009. Paul Sr. then exercised a contractual option to purchase Paul Jr.'s 20% share in OCC and subsequently filed a lawsuit to force the buyout. After determining the language of the contract is too vague to allow Sr. to force the sale, the appellate court ruled on behalf of Paul Jr.

OCC is best known for the bikes featured on American Chopper where bikes are built around a theme or, increasingly, for specific corporate or celebrity customers. The company has built custom bikes long before beginning the Discovery Channel show. Additionally, OCC launched a limited edition production line of motorcycles in July 2007, priced beginning at $31,000. These bikes include design elements originally developed for bikes featured on the show.[citation needed]

The range of standard production bikes will be extended to meet worldwide (with particular attention to Canada and Europe) legislation for motorbikes over a couple of years. This means that the bikes will be sold commercially outside the USA for the first time.[citation needed]

One of OCC's most popular bikes is The Fire Bike, which was designed by Paul Teutul Jr., to commemorate the New York firefighters who lost their lives on 9/11.[citation needed] The bike itself has been modeled after a fire truck, and an actual steel rivet from the World Trade Center has been integrated into the bike itself, mounted atop the bike's gas tank. Paul Jr. is noted as stating that the bike was themed "343", the number of New York firefighters who gave their lives on 9/11.[1]

The popularity of American Chopper led the United States Air Force to commission a $150,000 "Air Force Bike", first put on public display in March 2005. The motorcycle is ten feet long and is modeled after the F-22 Raptor, complete with Air Force symbol rims, riveted gas tank, Raptor exhausts and rear-view mirrors in the shape of jets. Air Force recruiters commissioned it as a public outreach tool.[citation needed]

The Teutul family appeared in the My Name Is Earl episode "Stole A Motorcycle". In this episode, it is discovered that Earl Hickey had stolen an OCC motorcycle with the help of his brother Randy. They had found the motorcycle outside the OCC garage with its keys left in the ignition. While intoxicated, Earl and Randy lose the bike. Randy finds the motorcycle and returns it to the Teutul family. At this point, Paul Sr. finds out that the keys had been in the ignition, and Mikey admits to having done this.

The Teutuls appeared on an episode of Miami Ink where Paul Sr. received a tattoo from Ami James.

The Teutuls also appeared in the show King of The Hill as a family including just Paul Jr., Paul Sr., and Mikey.

Orange County Choppers also appeared in Ewan McGregor and Charley Boorman's motorcycle tour documentary Long Way Round (originally shown in the UK on Sky One) where the Teutuls and various OCC employees rode with them to their final destination New York.

The Teutuls appeared on NBC game show Celebrity Family Feud on June 24, 2008, winning US$50,000 for the Make-A-Wish Foundation.

In April 2009, QVC, in honor of the OCC's tenth anniversary, had a studio/remote show. Paul Sr. was in QVC's studio in West Chester, Pennsylvania selling various tenth anniversary merchandise, while his sons were in Orange County at the soon-to-open OCC World Headquarters showing bikes and the new facility.

The three Teutuls appeared in another TLC show, Jon & Kate Plus 8. In this episode, Jon goes to OCC and helps design and build a motorcycle for himself and Mikey designs a motor-scooter for Kate. Paul Sr. and Jon are seen alluding to each family's discord. Mikey and the others coach the nervous and unadventurous Kate on her first motorbike ride on the long driveway at the Gosselin's home. Kate donated the pink scooter to a charity auction for the Ronald McDonald House in Hershey, Pennsylvania at the Hershey Medical Center, where her sextuplets were born.

The Orange County Choppers recently launched a series of free music concerts held in the retail store. P.O.D., Candlebox, Saliva, Red, 10 Years, Fair to Midland, and Framing Hanley have performed. On April 25, 2009, Smile Empty Soul, Earshot, Fixer, and Age of Daze all performed to celebrate the decade of the company's work. Additionally OCC in October in conjunction with RED/Sony put out a Classic Rock compilation CD of some of Paul Sr.'s favorite songs under the name "OCC Rocks". The CD also includes original music from The OCC Band comprising four guys who work at the shop. Recently Black Label Society will launch a concert in the retail store to promote their brand-new album Order of the Black.[2]

The coaster is the same one that has been prototyped outside Zamperla's factory in Italy.

The MotoCoaster is located near the Darien Square area of the park, between Boomerang and Twister. Orange County Choppers built a custom motorcycle inspired by the ride and the park.