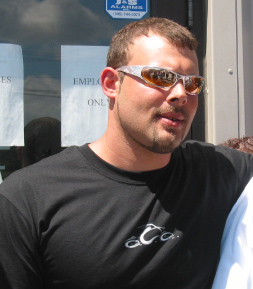 Paul "Paulie" Michael Teutul (born , ) is one of the stars of the American reality "". He co-founded along with his father, in . Although Paul sometimes goes by the nickname of "Junior", he is in fact not technically a "junior," because he does not share the same middle name as his father. Paulie's middle name is Michael, while his father, also Paul Teutul, bears the middle name of John. During an interview with David Letterman, Paul (the father) stated that he is technically a true junior, while his son is simply "Paul." Paulie is the chief designer and fabricator of OCC, and prior to that was head of the rail shop at Orange County Ironworks. He is also responsible for designing the logo for OCC.

Paulie, along with his father and youngest brother , became celebrities when Orange County Choppers became the focus of a reality television series "American Chopper" on the in 2002 (in the show was moved to TLC). He has another brother, Daniel who is the general manager and the owner of . He also has a sister, Cristin, who is the youngest of all the Teutul children. She is currently a nurse in .

While often criticized by his father, Teutul is a skilled custom bike builder. He controls the design, color, style, and assembly during builds. Teutul is also quite talented at working steel, and has done so from a very early age. He has created many custom themed bikes for OCC, many of these bike builds have been broadcast on the and , while some have been created off-camera.

The cast of American Chopper appeared on NBC's new show which premiered on June 24th, 2008. They won $50,000 for the Make A Wish Foundation.