John Frederick Carden Michell (9 February 1933 – 24 April 2009)[1][2] was an English writer whose key sources of inspiration were Plato and Charles Fort. His 1969 volume The View Over Atlantis has been described as probably the most influential book in the history of the hippy/underground movement and one that had far-reaching effects on the study of strange phenomena: it "put ley lines on the map, re-enchanted the British landscape and made Glastonbury the capital of the New Age." [3]

In some 40-odd titles over five decades he examined, often in pioneering style, such topics as sacred geometry, earth mysteries, geomancy, gematria, archaeoastronomy, metrology, euphonics, simulacra and sacred sites, as well as Fortean phenomena. An abiding preoccupation was the Shakespeare authorship question. His Who Wrote Shakespeare? (1996) was reckoned by The Washington Post "the best overview yet of the authorship question." [4]

Michell was educated at Eton and Trinity College, Cambridge. He did national service in the Royal Navy, during which time he qualified as a Russian translator at the Joint Services School for Linguists.[5] He then worked for a while as an estate agent in London.[6] In 1966 one of his properties, the basement of his own residence, became the base of the London Free School. The Black Power activist Michael X, having previously run a gambling club in the basement, had now become active in the organisation of the LFS and brought Michell into counter-culture activities. Michell began to offer courses in UFOs and ley lines.[7]

His first book, The Flying Saucer Vision, was published in 1967. At this time Michell took the view that "an imminent revelation of literally inconceivable scope" was at hand, and that the appearance of UFOs was linked to "the start of a new phase in our history".[8] In 1969 he published The View Over Atlantis, a book which argued that an ancient system of ley lines linked together megaliths and monuments from the distant past. Gary Lachman states that the book "put Glastonbury on the countercultural map." Ronald Hutton describes it as "almost the founding document of the modern earth mysteries movement".[9] By the late 1960s Michell was closely associated with members of the Rolling Stones.[6]

In the 1980s Michell was a member of the Lindisfarne Association and a teacher at its School of Sacred Architecture. He lectured at the Kairos Foundation, an "educational charity specifically founded to promote the recovery of traditional values in the Arts and Sciences".[10] He was for some years a visiting lecturer at the Prince of Wales' School of Traditional Arts.[11]

From 1997 he wrote a monthly column of humour, philosophy and social commentary in The Oldie magazine, an anthology of which was published in 2005 as Confessions of a Radical Traditionalist.

In 1964 Michell fathered a son, Jason Goodwin, who also became a writer. The relationship with Goodwin's mother did not last. His son did not meet his father until 1992, at the age of 28.[12] In 2007 Michell was married to Denise Price, the Archdruidess of the Glastonbury Order of Druids. The marriage was brief.[13] 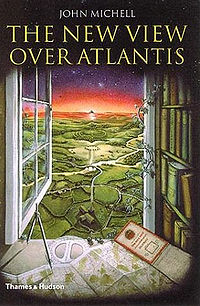 Cover of the revised edition of The View Over Atlantis, 1983

John Michell was the author of over forty books, numerous (sometimes humorous) short treatises, and articles in publications as diverse as International Times,[14] The Temenos Academy Review,[15][16] the Daily Mirror [17] and The Spectator.[18]

His better known works include The Flying Saucer Vision: the Holy Grail Restored (1967), The View Over Atlantis (1969), later revised as The New View Over Atlantis, (1983), which stimulated renewed interest in ley lines, City of Revelation (1972), which concerns sacred geometry, A Little History of Astro-Archaeology (1977), Phenomena: A Book of Wonders (1977 with R. J. M. Rickard), Eccentric Lives and Peculiar Notions (1984) and The Lost Science of Measuring the Earth: Discovering the Sacred Geometry of the Ancients (2006) with Robin Heath.

Michell's books received a broadly positive reception amongst the "New Age" and "Earth mysteries" movements and he is credited as perhaps being "the most articulate and influential writer on the subject of leys and alternative studies of the past".[19] Ronald Hutton describes his research as part of an alternative archaeology "quite unacceptable to orthodox scholarship." [20]

Bob Rickard, founding editor of Fortean Times, has written that Michell's first three works "provided a synthesis of and a context for all the other weirdness of the era. It’s fair to say that it played a big part in the foundation of Fortean Times itself by helping create a readership that wanted more things to think about and a place to discuss them. The overall effect was to help the burgeoning interest in strange phenomena spread out into mainstream culture." [3] His 1984 volume Eccentric Lives and Peculiar Notions covered such figures as Comyns Beaumont, Edward Hine and flat-earth advocate Lady Elizabeth Blount, as well as eccentric, not to say egregious, behaviour such as self-administered trepanning. 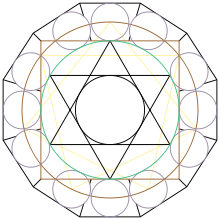 A recurring theme in Michell's work, from Living Wonders to Twelve Tribe Nations and The Measure of Albion, is of universal truths codified in nature and continually, if intermittently, rediscovered from ancient times up to the present day.

Ioan Culianu, a specialist in gnosticism and Renaissance esoteric studies, in a review in 1991 of The Dimensions of Paradise: The Proportions and Symbolic Numbers in Ancient Cosmology, expressed the view that, "After some deliberation the reader of this book will oscillate between two hypotheses: either that many mysteries of the universe are based on numbers, or that the book's author is a fairly learned crank obsessed with numbers." [21]

Michell, like Fort, maintained a thoroughgoing scepticism towards most of the theoretical tenets of contemporary science. "How did the world begin?" he enquired of the Daily Mirror's readers on one occasion. "The correct answer is . . . it is a total mystery. That is also the proper answer to the other big questions about our existence—the ones that children ask but adults hate to answer. Questions like: 'How did life begin?' or 'Where does human intelligence come from?' or 'How did language develop?' Everyone has ideas about these things, but no one really knows. If they did know there would not be all those different theories.

"We have all, for example, heard of the 'Big Bang.' According to this explanation, everything in the cosmos developed from a tiny package of incredibly dense matter that exploded. One day, somehow, it exploded and our world began. Adults are quite happy to accept this idea but it does not satisfy children. The next thing they ask, quite rightly, is: How did that suspicious package get there in the first place?"

He went on: "Most writers have their thing or main theme that runs throughout all their work. My thing for over 35 years, in books, articles, and lectures, has been the mystery of existence. Within this unexplained universe is an infinity of mysteries. Wherever you look, in archaeology and ancient history or in the modern records of parapsychology and strange phenomena, you find evidence to contradict every theory and 'certainty' of official science. The real world is quite different from the way our teachers describe it, and it is a great deal more interesting." [22]

Michell claimed that the Biblical miracle of the catch of 153 fish is based on geometry. David Fideler noted that "John Michell was the first to show how this story was intentionally constructed upon an underlying geometry." [23] He also noted in this book the relationship between the Egyptian Cubit, Remen and Megalithic Yard, stating that geometrically, if a square has a side that is the Remen then the diagonal will be the Royal Cubit. Furthermore he noted that if a rectangle measures two by one Remens then the diagonal will be the Megalithic Yard.[24][25]

In 1996 Michell published on the question of Shakespeare authorship. In surveying the arguments for and against the various candidates, he did not expressly favour any single one of the surprisingly many, but judged certain hypotheses more plausible than others, particularly the Oxfordian theory. Who Wrote Shakespeare? received mixed reviews: Publishers Weekly was critical,[26] while The Washington Post and The Independent praised his treatment of the subject.[27]