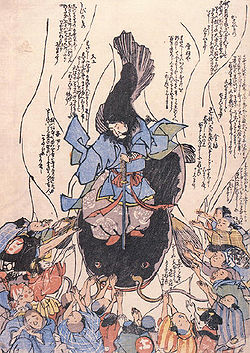 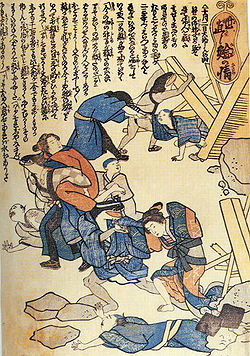 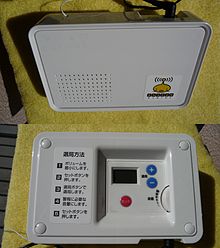 In Japanese mythology, the Namazu (鯰) or Ōnamazu (大鯰) is a giant catfish who causes earthquakes. He lives in the mud beneath the earth, and is guarded by the god Kashima who restrains the catfish with a stone. When Kashima lets his guard fall, Namazu thrashes about, causing violent earthquakes. Following an earthquake near Edo (modern day Tokyo) in 1855 (one of the Ansei Great Quakes), the Namazu became worshiped as a yonaoshi daimyojin (god of world rectification).[1]

Namazu-e (catfish prints) are a minor genre of ukiyo-e.[1] They are usually unsigned and encompass a large variety of scenes such as a namazu forcing the wealthy to excrete coins for the poor, and a namazu atoning for the earthquake he caused.[1]

It is believed by some that the origin of the story is the fact that catfish can sense the small tremors which happen before an earthquake, and are shown to be more active at such times. Supposedly, the sudden activity was observed in ancient times and believed the quakes to be the result of a giant catfish.

Catfish are depicted on pictures of emergency earthquake preparedness activities in Japan. For Example, the Earthquake Early Warning (Japan) logo by the Japan Meteorological Agency utilizes pictures of the catfish on devices capable of issuing an early warning.