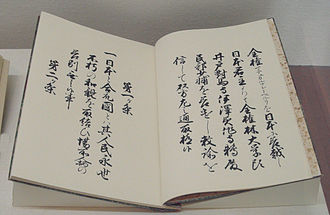 Ratification of the Japan-US Treaty of Peace and Amity, or "Convention of Kanagawa", 21 February 1855. Diplomatic Record Office of the Ministry of Foreign Affairs (Japan). 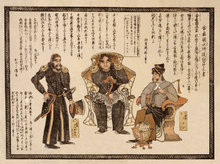 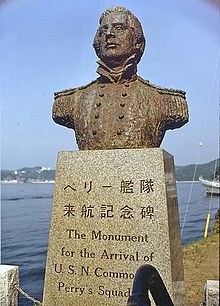 Bust of Matthew Perry in Shimoda

Foreigners in Yokohama in 1854.

On March 31, 1854, the Convention of Kanagawa (日米和親条約, Nichibei Washin Jōyaku?, "Japan-US Treaty of Amity and Friendship") or Kanagawa Treaty (神奈川条約, Kanagawa Jōyaku?) was concluded between Commodore Matthew C. Perry of the U.S. Navy and the Tokugawa shogunate.

The treaty opened the Japanese ports of Shimoda and Hakodate to United States trade and guaranteed the safety of shipwrecked U.S. sailors; however, the treaty did not create a basis for establishing a permanent residence in these locations.[1] The treaty did establish a foundation for the Americans to maintain a permanent consul in Shimoda. The arrival of the fleet would trigger the end of Japan's 200 year policy of seclusion (Sakoku).[2]

English text of the Kanagawa Treaty.

Perry initially refused to deal with Japanese officials and demanded to speak with the Japanese Head of State. At the time, Shogun Tokugawa Ieyoshi was the de-facto ruler of Japan; for the Emperor to interact in any way with foreigners was out of the question. Perry concluded the treaty with representatives of the Shogun, led by plenipotentiary Hayashi Akira (林韑ら?) and the text was reluctantly endorsed subsequently by Emperor Komei.[3]

The Kanagawa treaty was followed by the United States-Japan Treaty of Amity and Commerce, the "Harris Treaty" of 1858, which allowed the establishment of foreign concessions, extraterritoriality for foreigners, and minimal import taxes for foreign goods. The Japanese chafed under the "unequal treaty system" which characterized Asian and western relations during this period.[5]

The Kanagawa treaty became a significant causative factor leading to serious internal conflicts within Japan — an upheaval which was only resolved in 1867 with the end of the Tokugawa shogunate and the beginning of the Meiji Restoration.[citation needed]

Similar treaties were subsequently negotiated by the United Kingdom (Anglo-Japanese Friendship Treaty, October 1854), the Russians (Treaty of Shimoda, 7 February 1855), the French (Treaty of Amity and Commerce between France and Japan, 9 October 1858).

The Convention was negotiated and was then signed in a purpose-built house in Yokohama, Japan.