There are two subspecies:

In Asia it occurs in Turkey, Lebanon, Georgia, the Krasnodar area of southern Russia, the Himalayas, Afghanistan, Tajikistan, Northern Pakistan, and northern India.

Fossil evidence shows it had a much wider range across most of southern and western Europe before the Late Glacial Maximum, or until about 20,000 years ago.

It was noted by the botanist Joseph Pitton de Tournefort during his travels in the Near East in 1700-02, and so received its name from Linnaeus to identify the ancient kingdom on the south shores of the Black Sea, Pontus, in which it grew. At the other end of its range, in southern Spain, Linnaeus' friend and correspondent Clas Alströmer found it growing with Oleander. It was introduced to Britain as an ornamental shrub in 1763, where it is now considered by some to be an invasive species.[1] 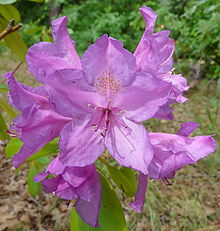 Rhododendron ponticum subsp. baeticum is one of the most extensively cultivated rhododendrons in western Europe. It is used as an ornamental plant in its own right, and more frequently as a rootstock onto which other more attractive rhododendrons are grafted. The plants were first grown in Britain in the 1760s, supplied by Conrad Loddiges and became widely distributed through the commercial nursery trade in the late C18th and early c19th. The roots readily send up suckers from below the graft, often allowing it to overtake the intended grafted rhododendron.

Honey produced with pollen from the flowers of this plant can be quite poisonous, causing severe hypotension and bradycardia in humans if consumed in sufficient quantities, due to toxic diterpenes (Grayanotoxins).[2]

Suckering of the root, together with its abundant seed production, has led to it becoming an invasive species over much of western Europe and in parts of New Zealand. Rhododendron control, or rhodie-bashing, is a key element in nature conservation in those areas.[3] Conservation organisations in Britain now believe that R.ponticum has become "a severe problem" in the native Atlantic oakwoods of the west highlands of Scotland and in Wales, and on heathlands in southern England, crowding out the native flora.[4] Clearance strategies have been developed, including the flailing and cutting down of plants with follow-up herbicide spraying. Injection of herbicide into individual plants has been found to be more precise and effective.[5]