The Daleks (also known as The Mutants and The Dead Planet) is a serial in the British science fiction television series Doctor Who, which was first broadcast in seven weekly parts from 21 December 1963 to 1 February 1964. This story marks the first appearance of the Doctor's greatest extraterrestrial enemies, the Daleks.

This story introduces two plotlines in Doctor Who, that of the TARDIS' navigational circuits malfunctioning and that of the supposed destruction of the Dalek race. In this case, instead of bringing its crew back to Earth, the TARDIS lands in a petrified jungle, and the Doctor has to try to fix their position by taking a reading of the stars. The Doctor insists they explore a futuristic city they spot beyond the forest but Ian Chesterton and Barbara Wright are not convinced. To force his companions to do so, the Doctor claims the fluid link of the TARDIS is running low on mercury (a ruse he later admits to), forcing the crew to travel to the city in search of more mercury.

Inside the city, Barbara becomes separated from her colleagues, and is, in the iconic first episode cliffhanger, threatened by an unseen creature with a metal arm - the first appearance of a Dalek. Before long, the entire crew is captured by the Daleks. Susan is eventually sent to retrieve anti-radiation drugs from the TARDIS, where she encounters a second species, the Thals, who are at war with the Daleks. Susan attempts to broker peace between the two groups, and while it appears to work, the Daleks eventually betray the Thals, opening fire on them at what was supposed to be a peaceful exchange of food.

In the ensuing chaos, the Doctor and his companions escape with the Thals, and learn their version of the history of their planet. They also learn that the Thals are avowed pacifists. In order to save them from the Daleks, the TARDIS crew convinces the Thals of the importance of aggression and warfare, and manages to lead the Thals in a successful genocide against the Daleks. At the end, it is believed the Dalek race has been destroyed.

This serial was loosely adapted by Milton Subotsky as a film, Dr. Who and the Daleks (1965) starring Peter Cushing as Dr Who, Roberta Tovey as Susan, Roy Castle as Ian Chesterton and Jennie Linden as Barbara. Roberta Tovey is the daughter of the late character actor George Tovey, who later appeared in Doctor Who as the poacher in Pyramids of Mars (1975). The film had no relation to the novelisation of The Daleks, which was titled Doctor Who and the Daleks on its 1973 release.

Arguably the most famous of the 1960s Doctor Who serials, The Daleks was one of the Doctor Who serials slated for destruction by the BBC in the 1970s. However, in 1978, Ian Levine came across them at BBC Enterprises just hours before all remaining copies of the story were to be destroyed and managed to save them.

In 1999 during a BBC2 themed evening, "Doctor Who Night" (13 November 1999) hosted by Tom Baker, a special edit (put together for this TX[clarification needed]) of episode 7 'The Rescue' was broadcast which included 5 minutes of footage from episode 6, not only that but due to a mistake when mastering a short section of episode 7 was omitted. The serial was most recently broadcast in the UK on BBC Four, as part of a celebration of the life and work of producer Verity Lambert. It was shown in three blocks from 5 April to 9 April 2008.

This was the first Doctor Who serial to be adapted as a novel. Written by David Whitaker, the book was first published in hardback on 12 November 1964 by Frederick Muller as Doctor Who in an Exciting Adventure with the Daleks.[19] A paperback release by Armada Books followed in 1965.[20]

In 1973 Target Books published it under the cover title Doctor Who and the Daleks, although the full title was still given on the inside frontpage. From 1977 onwards reprints dropped the full title. In 1992 the novelisation was retitled Doctor Who - The Daleks. It was the very first novelisation published under the Target imprint (the books would continue for the next 20 years).

From 1983 onwards the Target novelisations bore numbers, with the first 73 releases retroactively numbered in alphabetical order. However it would not be until 1992 that an actual reprint stated it was "No. 16" in the Target Books Doctor Who Library.

Whittaker's book differs from most later novelisations in that it is written in the first person and from the point of view of a companion (Ian Chesterton). It also ignores the events of the preceding serial An Unearthly Child, except for a modified retelling of the first episode (to explain how Ian and Barbara joined the Doctor). Here, Ian meets the Doctor, Barbara (who is Susan's tutor) and Susan on Barnes Common after a car crash. The novel also plays up the romantic tension between the two human companions and features a glass Dalek leader on Skaro.

Susan Foreman is renamed Susan English for the novelisation, which has led to some reference books erroneously listing the character by this name. In the PC game Destiny of the Doctors, the player has to ask the First Doctor the surname of Susan for one of the tasks. Both English and Foreman are available options (although only the latter is considered correct in the game).

The novelisation was translated into Dutch, Turkish, Japanese, Portuguese, French and German.

In 2005 the novel was issued by BBC Audio as part of the Doctor Who: Travels in Time and Space audio book collectors tin, read by William Russell. 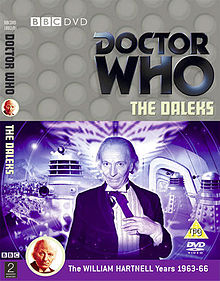