Mindon Min (Burmese: မင်းတုန်းမင်း, pronounced [mɪ́ɴdóuɴ mɪ́ɴ]; 8 July 1808 – 1 October 1878) was the penultimate king of Burma (Myanmar) from 1853 to 1878.[1] He was one of the most popular and revered kings of Burma. Under his half brother King Pagan, the Second Anglo-Burmese War in 1852 ended with the annexation of Lower Burma by the British Empire. Mindon and his younger brother Kanaung overthrew their half brother King Pagan. He spent most of his reign trying to defend the upper portion of his country from British encroachments, and to modernize his kingdom.

King Mindon founded the last royal capital of Burma, Mandalay, in 1857. His young brother Kanaung proved to be a great administrator and modernizer. During Mindon's reign, scholars were sent to France, Italy, the United States, and Great Britain, in order to learn about the tremendous progress achieved by the Industrial Revolution.

Mindon introduced the first machine-struck coins to Burma, and in 1871 also held the Fifth Buddhist council in Mandalay. He had already created the world's largest book in 1868, the Tipitaka, 729 pages of the Buddhist Pali Canon inscribed in marble and each stone slab housed in a small stupa at the Kuthodaw Pagoda at the foot of Mandalay Hill.

In 1871 Mindon also donated a new htee ('umbrella' or crown gilded and encrusted with precious diamonds and other gems) to the 343-foot-tall (105 m) Shwedagon Pagoda, which is located in then British held Yangon, although he was not allowed to visit this most famous and venerated pagoda in the country.

With the opening of the Suez Canal, Mindon assembled a flotilla of steamers to facilitate trade with the British.

His brother Kanaung is still remembered by the Burmese as an avid modernizer, who would go to the factories early on cold winter mornings with a blanket wrapped around, just to talk to the mechanics about how the machines ran. He was in charge of the Royal Army, as was customarily required of Burmese crown princes, and he imported and manufactured guns, cannons and shells.

During an unsuccessful palace rebellion on June 18, 1866 by Princes Myinkun and Myinkhondaing (sons of King Mindon, jealous for not being named successor, and backed by the British who were alarmed by Kanaung's modernization of the Burmese Royal Armies), the crown prince was assassinated. The two princes fled to British Burma, and were granted asylum by the British.

King Mindon himself got away in an extraordinary manner, which the Burmese regarded as a sign of his hpon (a sum of past good deeds that affect one's present life). He ran into the very person who was assigned to kill him and whom he recognised, but on encountering the king face to face, the man dropped his sword and dropped on his knees from force of habit. The king was then promptly offered a piggy-back ride by his would-be assassin and escaped towards the barracks of his loyal guards. 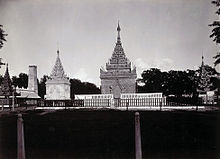 King Mindon's tomb in Mandalay, in a photograph from 1903.

The rebellion caused Mindon great reluctance in naming a successor to Kanaung for fear of civil war.

One of his queens, Hsinbyumashin, dominated the last days of King Mindon. It was an edict by Hsinbyumashin that ordered almost all possible heirs to the throne be killed, so that her daughter Supayalat and son-in-law Thibaw would become queen and king. Close royals of all ages and both genders were mercilessly executed, after being tricked that the dying king wanted to bid them farewell.

Thibaw, Mindon's son from a lesser queen, succeeded him after his death in 1878. King Thibaw was defeated by the British in the Third Anglo-Burmese War in November 1885 resulting in total annexation of Burma.