The expression Gay-Lussac's law is used for each of the two relationships named after the French chemist Joseph Louis Gay-Lussac and which concern the properties of gases, though it is more usually applied to his law of combining volumes, the first listed here. One law relates to volumes before and after a chemical reaction while the other concerns the pressure and temperature relationship for a sample of gas. 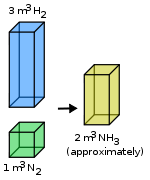 The law of combining volumes states that, when gases react together to form other gases, and all volumes are measured at the same temperature and pressure:

The ratio between the volumes of the reactant gases and the products can be expressed in simple whole numbers.

This reflects the fact that (Avogadro's law) equal volumes of gas contain equal numbers of molecules ( at the same temperature and pressure), and also that in chemical reactions, the molecules combine in a ratio of whole numbers—this is known as the stoichiometry of the chemical reaction and is expressed via the chemical equation for the reaction. The law of combining gases was published by Joseph Louis Gay-Lussac in 1808.[1]

Gay-Lussac's name is also associated — erroneously — with another gas law, the so-called pressure law, which states that:

The pressure of a gas of fixed mass and fixed volume is directly proportional to the gas' absolute temperature.

Simply put, if a gas' temperature increases then so does its pressure, if the mass and volume of the gas are held constant. The law has a particularly simple mathematical form if the temperature is measured on an absolute scale, such as in kelvins. The law can then be expressed mathematically as:

For comparing the same substance under two different sets of conditions, the law can be written as:

Amontons' Law of Pressure-Temperature: The pressure law described above should actually be attributed to Guillaume Amontons, who, in the late 17th century (more accurately between 1700 and 1702[2][3]), discovered that the pressure of a fixed mass of gas kept at a constant volume is proportional to the temperature. Amontons discovered this while building an "air thermometer". Calling it Gay-Lussac's law is simply incorrect as Gay-Lussac investigated the relationship between volume and temperature (i.e. Charles' Law), not pressure and temperature.

Charles' Law was also known as the Law of Charles and Gay-Lussac, because Gay-Lussac published it in 1802 using much of Charles's unpublished data from 1787. However, in recent years the term has fallen out of favor, and Gay-Lussac's name is now generally associated with the law of combining volumes. Amontons' Law, Charles' Law, and Boyle's law form the combined gas law. The three gas laws in combination with Avogadro's Law can be generalized by the ideal gas law.