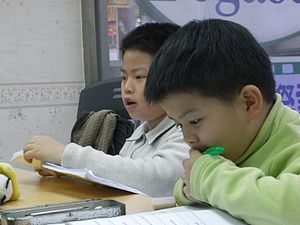 Cram schools are specialized schools that train their students to meet particular goals, most commonly to pass the entrance examinations of high schools or universities. The English name is derived from the slang term "cramming," meaning to study hard or to study a large amount of material in a short period of time.

Cram schools usually specialise in a particular subject or subjects. Cram schools that prepare students for high school and university entrance examinations are also frequently specialised to particular schools, and the staff may have access to previous years' examinations. Special cram schools that prepare students who have failed their entrance examinations (known as rōnin in colloquial Japanese) to take them the following year are also common. Such students may spend up to eighteen hours a day studying to retake their tests. Students who attend regular after-school cram schools may study four hours or more.

As the name suggests, the aim of a cram school is to impart as much information to its students as possible in the shortest period of time. The goal is to enable the students to "parrot," that is, to unthinkingly repeat, information that is deemed necessary for particular examinations. Cram schools are sometimes criticised, along with the countries in which they are prevalent, for the lack of training their students' critical thinking and analysis. However many believe that they are necessary to compensate for the formal education system's inability or unwillingness to address particular individual problems.[citation needed]

Cram schools are called "Cursinhos" (lit. Little Courses) in Brazil and are attended by students who will be taking a vestibular exam.

Cram schools are popular in China due to the importance of standardised exams, such as:

Cram Schools in Peru are not an admission requirement to enter to any Tertiary Institution; however, due to fierce competition, preparation in a cram school allows the candidate to achieve the highest mark possible in the entry exam and so gain entry to their desired Tertiary Institution.

Crammers in England and Wales today are almost entirely concerned with preparing teenagers for A-level and GCSE exams, to improve their examination results and get admission to university. Some are residential; few if any have sports facilities. All are expensive, compared even to prestigious public schools such as Winchester and Eton, which also provide many extra-curricular activities. The English cram school, on the other hand, achieves results through focus on academic work.