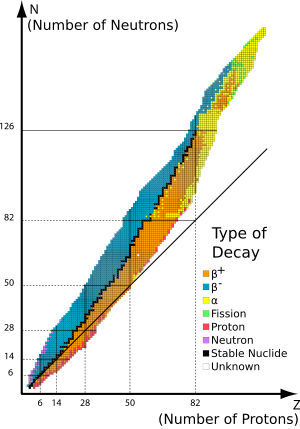 In nuclear physics, a magic number is a number of nucleons (either protons or neutrons) such that they are arranged into complete shells within the atomic nucleus. The seven most widely recognised magic numbers as of 2007 are

Atomic nuclei consisting of such a magic number of nucleons have a higher average binding energy per nucleon than one would expect based upon predictions such as the semi-empirical mass formula and are hence more stable against nuclear decay.

... isotopes having magic numbers means that transuranium elements can be created with extremely large nuclei and yet not be subject to the extremely rapid radioactive decay normally associated with high atomic numbers (as of 2007, the longest-lived, known isotope among all of the elements between 110 and 120 lasts only 12 min and the next 22 s).[citation needed] Large isotopes with magic numbers of nucleons are said to exist in an island of stability. Unlike the magic numbers 2–126, which are realized in spherical nuclei, theoretical calculations predict that nuclei in the island of stability are deformed. Before this was realized, higher magic numbers, such as 184, were predicted based on simple calculations that assumed spherical shapes. It is now believed that the sequence of spherical magic numbers cannot be extended in this way.[citation needed]

According to Steven A. Moszkowski (a student of Maria Goeppert-Mayer), the term "magic number" was coined by Eugene Wigner: "Wigner too believed in the liquid drop model, but he recognized, from the work of Maria Mayer, the very strong evidence for the closed shells. It seemed a little like magic to him, and that is how the words ‘Magic Numbers’ were coined.”[1]

Double-magic effects may allow existence of stable isotopes which otherwise would not have been expected. An example is calcium-40 (40Ca), with 20 neutrons and 20 protons, which is the heaviest element made of the same number of protons and neutrons. Both calcium-48 (48Ca) and nickel-48 (48Ni) are double magic because calcium-48 has 20 protons and 28 neutrons while nickel-48 has 28 protons and 20 neutrons. Calcium-48 is very neutron-rich for such a light element, but like calcium-40, it is made stable by being double magic. Similarly, nickel-48, discovered in 1999, is the most proton-rich isotope known beyond helium-3.[2]

Magic number shell effects are seen in ordinary abundances of elements: it is no accident that helium-4 (4He) is among the most abundant (and stable) nuclei in the universe[3] and that lead-208 (208Pb) is the heaviest stable nuclide.

Magic effects can keep unstable nuclides from decaying as rapidly as would otherwise be expected. For example, the nuclides tin-100 (100Sn) and tin-132 (132Sn) are interesting examples of doubly magic isotopes of tin that are unstable; however they represent endpoints beyond which stability drops off rapidly.

In December 2006 hassium-270 (270Hs), with 108 protons and 162 neutrons, was discovered by an international team of scientists led by the Technical University of Munich having the unusually long half-life of 22 seconds. Hassium-270 evidently forms part of an island of stability, and may even be double magic.[4][5]

Magic numbers are typically obtained by empirical studies; however, if the form of the nuclear potential is known then the Schrödinger equation can be solved for the motion of nucleons and energy levels determined. Nuclear shells are said to occur when the separation between energy levels is significantly greater than the local mean separation.

In the shell model for the nucleus, magic numbers are the numbers of nucleons at which a shell is filled. For instance the magic number 8 occurs when 1s1/2, 1p3/2, 1p1/2 energy levels are filled as there is a large energy gap between the 1p1/2 and the next highest 1d5/2 energy levels. The empirical values can be reproduced using the classical shell model with a strong spin-orbit interaction.

The atomic analog to nuclear magic numbers are those numbers of electrons leading to discontinuities in the ionization energy. These occur for the noble gases helium, neon, argon, krypton, xenon, and radon. Hence, the "atomic magic numbers" are 2, 10, 18, 36, 54, and 86.

In 2007, Jozsef Garai from Florida International University proposed a mathematical formula describing the periodicity of the nucleus in the periodic system based on the tetrahedron.[6]