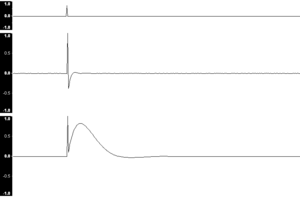 For example, the dynamic system might be a planetary system in orbit around a star; the external influence in this case might be another massive object arriving from elsewhere in the galaxy; the impulse response is the change in the motion of the planetary system caused by interaction with the new object.

In all these cases, the 'dynamic system' and its 'impulse response' may refer to actual physical objects, or to a mathematical system of equations describing these objects.

Mathematically, how the impulse is described depends on whether the system is modeled in discrete or continuous time. The impulse can be modeled as a Dirac delta function for continuous-time systems, or as the Kronecker delta for discrete-time systems. The Dirac delta represents the limiting case of a pulse made very short in time while maintaining its area or integral (thus giving an infinitely high peak). While this is impossible in any real system, it is a useful idealisation. In Fourier analysis theory, such an impulse comprises equal portions of all possible excitation frequencies, which makes it a convenient test probe.

To determine an output function directly in the time domain requires the convolution of the input function with the impulse response function. This requires the use of integrals, and is usually more difficult than simply multiplying two functions in the frequency domain.

The impulse response, considered as a Green's function, can be thought of as an "influence function:" how a point of input influences output.

In practical systems, it is not possible to produce a perfect impulse to serve as input for testing; therefore, a brief pulse is sometimes used as an approximation of an impulse. Provided that the pulse is short enough compared to the impulse response, the result will be close to the true, theoretical, impulse response. In many systems, however, driving with a very short strong pulse may drive the system into a nonlinear regime, so instead the system is driven with a pseudo-random sequence, and the impulse response is computed from the input and output signals.[1]

An application that demonstrates this idea was the development of impulse response loudspeaker testing in the 1970s. Loudspeakers suffer from phase inaccuracy, a defect unlike other measured properties such as frequency response. Phase inaccuracy is caused by (slightly) delayed frequencies/octaves that are mainly the result of passive cross overs (especially higher order filters) but are also caused by resonance, energy storage in the cone, the internal volume, or the enclosure panels vibrating.[citation needed] Measuring the impulse response, which is a direct plot of this "time-smearing," provided a tool for use in reducing resonances by the use of improved materials for cones and enclosures, as well as changes to the speaker crossover. The need to limit input amplitude to maintain the linearity of the system led to the use of inputs such as pseudo-random maximum length sequences, and to the use of computer processing to derive the impulse response.[2]

Impulse response is a very important concept in the design of digital filters for audio processing, because digital filters can differ from 'real' filters in often having a pre-echo, which the ear is not accustomed to.

Impulse response analysis is a major facet of radar, ultrasound imaging, and many areas of digital signal processing. An interesting example would be broadband internet connections. DSL/Broadband services use adaptive equalisation techniques to help compensate for signal distortion and interference introduced by the copper phone lines used to deliver the service.

In economics, and especially in contemporary macroeconomic modeling, impulse response functions describe how the economy reacts over time to exogenous impulses, which economists usually call 'shocks', and are often modeled in the context of a vector autoregression. Impulses that are often treated as exogenous from a macroeconomic point of view include changes in government spending, tax rates, and other fiscal policy parameters; changes in the monetary base or other monetary policy parameters; changes in productivity or other technological parameters; and changes in preferences, such as the degree of impatience. Impulse response functions describe the reaction of endogenous macroeconomic variables such as output, consumption, investment, and employment at the time of the shock and over subsequent points in time.[4][5]