The Mauritius Blue Pigeon or Pigeon Hollandais (Alectroenas nitidissima[1]) is an extinct species of pigeon formerly endemic to Mauritius. Its alternative vernacular name derives from its coloration: the bird, tri-colored white, dark blue and red, reminded Sonnerat, who brought it to the attention of the scientific world, of the Dutch flag[2] 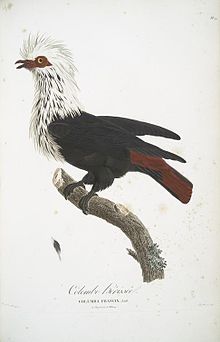 Well known to the island's inhabitants, it was nonetheless not the subject of dedicated scientific research. Most details of its life are somewhat apocryphal, such as a rather terrestrial habit (unlike its congeners, which are very arboreal) and the claim that it often fed on river mussels; while this cannot be discounted, fruits likely made up the mainstay of its diet (although fruit availability on Mauritius is heavily variable according to season). The crop and stomach contents of one bird contained 4 "nuts" (capsules or seeds) of Calophyllum tacamahaca or Labourdonnaisia calophylloides. From a single captive specimen that survived for a few months in the menagerie of William V, Prince of Orange in 1790, the voice is recorded: a dove-like cooing during the day, and rows of 10-12 baf calls in the night. Only three specimens are known: the type in the Muséum national d'Histoire naturelle, Paris, one apparently taken some time before 1819 in the Royal Museum, Edinburgh and one, the last recorded, in the Mauritius Natural History Museum, Port Louis. There are some paintings of specimens, two fine sketches of a freshly killed bird made by a Dutch sailor in 1603, and two pictures of a captive bird, probably the 1790 individual.

Perhaps surprisingly given the rich fossil record of other extinct Mauritian taxa, the first bones of this species were only recovered in 2006 by the expedition of the Mauritian-European Dodo Research Programme. On the other hand, this may indicate that the Mauritius Blue Pigeon only inhabited dense forest, as paleontological research on Mauritius has been largely limited to coastal areas and caves. The bones, discovered in the deposit of the Mare aux Songes, seem to be of a bird that was killed and brought there by a flash flood or similar disaster. 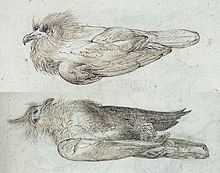 No unequivocal written records exist of the Mauritius Blue Pigeon until 1755, apart from one brief mention by François Cauche in 1651 of similar Alectroenas encountered on Mauritius and Madagascar in 1640. In 1755, Cossigny gave a somewhat more detailed description of the bird, noting that it was becoming rare since the 1730s. He attributed the decline to deforestation and hunting by escaped slaves; as opposed to the Pink Pigeon, which survives until today, the Mauritius Blue Pigeon was not seasonally poisonous or unpalatable. In 1801, though, Jacques Gérard Milbert was still able to procure several for food, but he could only find it in the woods of the river gorges. The last specimen, taken in 1826 in the forests of Savanne district, and the 1832 report by Julien Desjardins suggest that in 1830, birds could still be found in the remaining patches of forest around the Mare aux Vacoas. As a claim that one additional bird was shot around 1850 is erroneous, it can be concluded that the Mauritius Blue Pigeon became extinct in the 1830s. Apart from habitat destruction and hunting, introduced predators, mainly Crab-eating Macaques, were probably also responsible.