William Thomson (or Lord Kelvin) first discovered ordinary magnetoresistance in 1856. He experimented with pieces of iron and discovered that the resistance increases when the current is in the same direction as the magnetic force and decreases when the current is at 90° to the magnetic force. He then did the same experiment with nickel and found that it was affected in the same way but the magnitude of the effect was greater. This effect is referred to as anisotropic magnetoresistance (AMR). 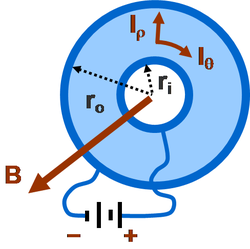 Figure 1 illustrates the Corbino disc. It consists of a conducting annulus with perfectly conducting rims. Without a magnetic field, the battery drives a radial current between the rims. When a magnetic field parallel to the axis of the annulus is applied, a circular component of current flows as well, due to the Lorentz force. A discussion of the disc is provided by Giuliani.[1] Initial interest in this problem began with Boltzmann in 1886, and independently was re-examined by Corbino in 1911.[1]

In a simple model, supposing the response to the Lorentz force is the same as for an electric field, the carrier velocity v is given by:

where μ = carrier mobility. Solving for the velocity, we find:

where the reduction in mobility due to the B-field is apparent.

To compensate for the non-linear characteristics and inability to detect the polarity of a magnetic field, a somewhat more complex structure is used for sensors. It consists of stripes of aluminum or gold placed on a thin film of permalloy (a ferromagnetic material exhibiting the AMR effect) inclined at an angle of 45°. This structure forces the current not to flow along the “easy axes” of thin film, but at an angle of 45°. The dependence of resistance now has a permanent offset which is linear around the null point. Because of its appearance, this sensor type is called 'barber pole'.

The AMR effect is used in a wide array of sensors for measurement of Earth's magnetic field (electronic compass), for electric current measuring (by measuring the magnetic field created around the conductor), for traffic detection and for linear position and angle sensing. The biggest AMR sensor manufacturers are Honeywell, NXP Semiconductors, and Sensitec GmbH.