Nakano Station is served by the JR East Chūō Line (Rapid) and Chūō-Sōbu Line, and the Tokyo Metro Tōzai Line. There are no turnstiles between lines, allowing for easy transfers. 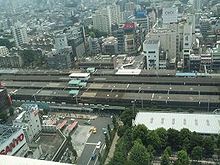 Nakano Station viewed from above, June 2003