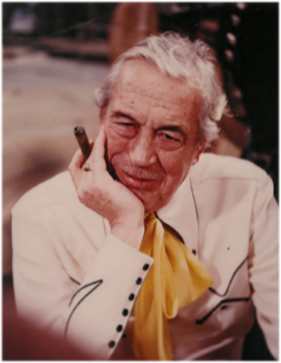 Huston (pronounced "Hew'-stun", like the city ) was born in , the son of the Canadian-born actor, , and Rhea Gore, a sports reporter; he was of descent on his father's side, his ancestral surname was Houston [wc.rootsweb.com] , and English and Welsh on his mother's. Huston was raised by his maternal grandparents, Adelia Richardson and John Marcellus Gore.

As a ten year old he was stricken by a serious illness which left him all but bedridden for several years. On his recuperation, this acted as the spur to pursue a full life, both intellectually and physically.

Huston began his film career as a and made films mainly adapted from books or plays. The six-foot-two-inch, brown-eyed director also acted in a number of films, with distinction in 's "The Cardinal" for which he was nominated for the for and in Roman Polanski's "Chinatown" as the film's central heavy against .Huston's films were insightful about human nature and human predicaments. They also sometimes included scenes or brief dialogue passages that were remarkably prescient concerning environmental issues that came to public awareness in the future, in the period starting about 1970; examples include "The Treasure of the Sierra Madre" (1948) and "The Night of the Iguana" (1964). "The Misfits" (1960) was written by and featured an all-star cast including , , , and , and was the last screen appearance of icons Gable and Monroe. Famously, Huston spent long evenings carousing in the Nevada casinos after filming, surrounded by reporters and beautiful women, gambling, drinking, and smoking cigars. Gable remarked during this time that 'if he kept it up he would soon die of it'. Gable died three weeks after the end of filming from a massive heart attack while Huston went on to live for twenty-six more years.

After filming the documentary "" on the psychiatric treatment of soldiers for shellshock, Huston resolved to make a film about and psychoanalysis. The film, "", began as a collaboration between Huston and . Sartre dropped out of the film and requested his name be removed from the credits. Huston went on to make the film starring as Freud.

Huston is also famous to a generation of fans of 's stories as the voice of the wizard in the animated adaptations of "The Hobbit" (1977) and "The Return of the King" (1980).

Many of his films were edited by Russell Lloyd, who was nominated for an Oscar for editing The Man Who Would Be King" (1975).

In 1941, Huston was nominated for an Academy Award for Best Adapted Screenplay for "The Maltese Falcon". He was nominated again and won in 1948 for "The Treasure of the Sierra Madre", for which he also received the award.

Huston received 15 Oscar nominations in the course of his career. In fact, he is the oldest person ever to be nominated for the Best Director Oscar when, at 79 years old, he was nominated for "" (1985). He also has the unique distinction of directing both his father Walter and his daughter Anjelica in Oscar-winning performances (in "The Treasure of the Sierra Madre" and "", respectively), making the Hustons the first family to have three generations of Academy Award winners.

Huston, an Episcopalian, [ [http://www.adherents.com/people/ph/John_Huston.html The religion of director John Huston ] ] was married five times, to:
*Dorothy Harvey- This, his first marriage lasted 7 years. Dorothy and John were divorced in 1933.
*Lesley Black

It was during his marriage to Black that he embarked on an affair with married Marietta FitzGerald. While her husband was helping the war effort, the pair were once rumoured to have made love so vigorously, they broke a friend's bed. [ [http://www.nytimes.com/books/97/11/09/reviews/971109.09brubact.html Running Around in High Circles ] ] When her husband returned before the end of the , Huston returned to Hollywood to await Marietta's divorce. However, on a trip to she fell in love with billionaire British MP , and decided to marry him instead.

All but the marriage to Soma, who died, ended in . In addition to his children with Soma, he also was the father of the director (by Zoe Sallis).

Among his friends were and .

According to a documentary film about Huston's life, he struck and killed a female pedestrian with his car at the corner of Gardner and Sunset in Los Angeles when he was in his late 20s. He was exonerated of wrongdoing at the follow-up inquest.

Huston visited Ireland in 1951 and stayed at , , the home of , a member of the family. He visited Ireland several times afterwards and on one of these visits he purchased and restored a Georgian home, St Clerans, of , . He became an Irish citizen and his daughter Anjelica attended school in Ireland at for a number of years. A film school is now dedicated to him on the campus. Huston is also the inspiration for the 1990 film "" starring , who also directed.

Huston was an accomplished painter who wrote in his autobiography "Nothing , has played a more important role in my life". As a young man he studied at the in Los Angeles but dropped out within a few months. He later studied at the . He painted throughout his life and was particularly interested in and the American school of . He had studios in each of his homes and owned a wide collection of art including a notable collection of Pre-Columbian art [ [Art by Directors, Karl French, Granta 86, 2004, ISBN 0 90 314169 8] In 1982 he created the label for .

He died from on , in Middletown, . A few weeks before, Marietta visited him and his "started jumping with excitement as soon as she entered the room." She was, his friends maintained, the only woman he ever really loved. [ [http://www.nytimes.com/books/97/11/09/reviews/971109.09brubact.html Running Around in High Circles ] ]

Huston is interred in the in .