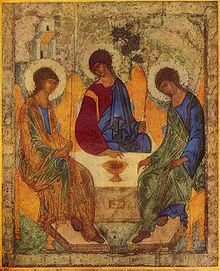 Medieval Russian icon of the Old Testament Trinity by Andrei Rublev, used as the icon of the feast for Whit Monday.

Whit Monday or Pentecost Monday (also known as Monday of the Holy Spirit) is the holiday celebrated the day after Pentecost, a movable feast in the Christian calendar. It is movable because it is determined by the date of Easter.

Whit Monday gets its English name for following "Whitsun", the day that became one of the three baptismal seasons. The origin of the name "Whit Sunday" is generally attributed to the white garments formerly worn by those newly baptized on this feast.

The Monday after Pentecost is a holiday in Austria, Belgium, Cyprus, Denmark, France, Germany, Greece, Gibraltar, Hungary, Iceland, Luxembourg, the Netherlands, Norway, Romania, and Switzerland. In many of these countries, Whit Monday is known as "the second day of Pentecost" or "the second Whitsun". In France, it was a non-pay work day for many workers from 2005 to 2007. This was to raise extra funds for elderly and disabled people.[1] It became a public holiday again in 2008.[2] In Liechtenstein, Whit Monday is considered to be a "favorite holiday"; much like Christmas in many other countries. In Germany, Whit Monday (German: Pfingstmontag) is a Holy Day of Obligation for Roman Catholics.[3]

The table on the right provides columns giving the dates on which Whit Monday is observed in both Western Christianity and Eastern Christianity. The Eastern Orthodox and Oriental Orthodox churches calculate Pascha (Easter) differently from the West (see Computus), and so the date of Whit Monday will be different most years.