Rakhine State (Burmese: ရခိုင်ပြည်နယ်, Rakhine pronunciation [ɹəkʰàiɴ pɹènè]; Burmese pronunciation: [jəkʰàiɴ pjìnɛ̀]; formerly Arakan) is a Burmese state. Situated on the western coast, it is bordered by Chin State in the north, Magway Region, Bago Region and Ayeyarwady Region in the east, the Bay of Bengal to the west, and the Chittagong Division of Bangladesh to the northwest. It is located approximately between latitudes 17°30' north and 21°30' north and east longitudes 92°10' east and 94°50' east. The Arakan Mountains, which rise to 3,063 metres (10,049 ft) at Victoria Peak, separate Rakhine State from central Burma. Rakhine State has an area of 36,762 square kilometres (14,194 sq mi) and its capital is Sittwe.[2]

The term Rakhine is believed to have been derived from the Pali word "Rakkhapura" from "Rakkhita" meaning the land of the people of Rakhasa (Rakhasa > Rakkha > Rakkhaing > Rakhaing) who were given this name in honor of their preservation of their national heritage and ethics or morality. The word Rakhine means, "one who maintains his own race."[3] In the Rakhine language, the land is called Rakhinepray, the ethnic Rakhine are called Rakhinetha.

Arakan, used in British colonial times, is believed to be a Portuguese corruption of the word Rakhine that is still popularly used in English. Many English language users[note 1] eschew the name changes promulgated by the military government. 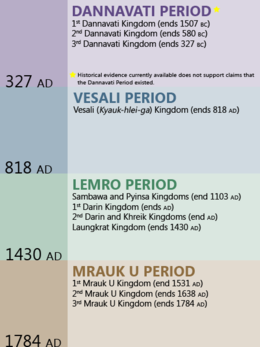 The history of the region which corresponds to modern day Rakhine State can be roughly divided into seven parts. The first four divisions and the periods are based on the location of the centre of power of the main independent Rakhine-dominated polities in the northern Rakhine region, especially along the Kaladan River. Thus, the history is divided into the Dhanyawadi, Waithali, Laymro and Mrauk U. Mrauk U was conquered by the Konbaung dynasty of Burma in 1784-85, after which Rakhine became part of the Konbaung kingdom of Burma. In 1824, the first Anglo-Burmese war erupted and in 1826, Rakhine (alongside Tanintharyi) was ceded to the British as repatriation by the Burmese to the British. Rakhine thus became part of the province of Burma of British India. In 1948, Burma was given independence and Rakhine became part of the new republic.

Based on Rakhine oral histories and inscriptions in certain temples, the history of the Rakhine region date back nearly five thousand years.[citation needed] The Rakhine people trace their societal history back to as far as 3325 B.C.E. and have given a lineal succession of 227 native monarchs and prices down to the last ruler in 1784. They also describe their territory of including, in varying points of time, the regions of Ava, the Irrawaddy Delta, the port town of Thanlyin (Syriam) and parts of eastern Bengal. However, the expanse of the successive Rakhine kingdoms does not exactly corroborate with certain known historical documentation.

According to Rakhine legend, the first recorded kingdom rose centred around the northern town of Dhanyawadi in the 34th century B.C.E. and lasted til 327 C.E. Rakhine documents and inscriptions states that the famed Mahamuni Buddha image was cast in Dhanyawady in around 554 B.C.E., when the Buddha visited the kingdom. After the fall of Dhanyawadi in the 4th century C.E., the centre of power shifted to a new dynasty based in the town of Waithali. The Waithali kingdom ruled the regions of Rakhine from the middle of the 4th century to 818 C.E. The period is seen as the classical period of Rakhine culture, architecture and Buddhism, as the Waithali period left behind more archeological remains compared to its predecessor. A new dynasty emerged in four towns along the Laymro river as Waithali waned in influence, and ushered in the Lemro period, where four principal towns served as successive capitals.

The final kingdom of Mrauk U was founded in 1430 by Min Saw Mon. It is seen by the Rakhine people as the golden age of their history, as Mrauk U served as a commercially important port and base of power in the Bay of Bengal region and involved in extensive maritime trade with Arabia and Europe. The country steadily declined from the seventeenth century onwards after the loss of Chittagong to the Mughal Empire in 1666. Internal instability, rebellion and dethroning of kings were very common. The Portuguese, during the era of their greatness in Asia, gained a temporary establishment in Arakan.

On the last day of 1784, the internally divided kingdom fell to invading forces from Konbaung Burma. The Mahamuni image was taken away by the Burmese as war loot. This caused an expansionist Burma to come into direct territorial contact with territories of the British East India Company, which set the stage for future flaring of tension. Various geopolitical issues gave rise to the First Anglo-Burmese war(1824–26). In the Treaty of Yandabo (1826), which ended hostilities, Burma was forced to cede Rakhine (Arakan) alongside Tanintharyi (Tenasserim) to British India. The British made Sittwe (Akyab) the capital of Arakan. Later, Arakan became part of the province of Burma of the British Indian Empire, and then part of British Burma when Burma was made into a separate crown colony. Arakan was administratively divided into three districts along traditional divisions during the Mrauk U period.

Rakhine (Arakan) was the site of many battles during the Second World War, most notably the Arakan Campaign 1942-1943 and the Battle of Ramree Island. In 1948, Rakhine became part of the newly independent Union of Burma and the three districts became Rakhine Division. From the 1950s, there was a growing movement for secession and restoration of Rakhine independence. In part to appease this sentiment, in 1974, the socialist government under General Ne Win constituted Rakhine State from Arakan Division giving at least nominal acknowledgment of the regional majority of the Rakhine people. Islamic separatists calling themselves the Mujahid also carried out a rebellion to create an islamic state in the regions bordering Bengal.

The ethnic Rakhine make up the majority.[5][6] The Rakhine reside mainly in the lowland valleys as well as Ramree and Manaung (Cheduba) islands. A number of other ethnic minorities like the Chin, Mro, Chakma, Khami, Dainet, and Maramagri inhibit mainly in the hill regions of the state. Most of the Tibeto-Burmans living in Rakhine State adhere to Theravada Buddhism. Even the Chin, who are usually related with Protestant Christianity or Animism, of Rakhine state adhere to Buddhism due to the cultural influence of the Rakhine people.

Rakhine state is also home to a large Muslim minority. Amongst them, the controversial Rohingya are the most well known, making up approximately 25% of the state's population. They live on the border districts with Bangladesh. The 'Rohingya' population, according to a 2009 UN estimate, numbered about 723,000; they are not counted as citizens by the military government.[7] [7] The 'Rohingya' are only part of the Muslim populace of Rakhine state - not all Muslims in Rakhine are or claim to be Rohingya. Other Muslims groups include Kaman Muslims (Indigenous to Myanmar). In fact, there are different Muslim descents from Arab countries, India and East Pakistan (now Bangladesh).

Rakhine State consists of four districts: Sittwe, Maungdaw, Kyaukphyu and Thandwe. Combined, these districts have a total of 17 townships[8] and 1,164 village-tracts. Sittwe is the capital of the state.

Few roads cross the Arakan Mountains from central Burma to Rakhine State. The three highways that do are the Ann to Munbra (Minbya in Burmese pronunciation) road in central Rakhine,[9] the Toungup to Pamtaung road in south central Rakhine,[9] and the Gwa to Ngathaingchaung road in far southern Rakhine.[9][10][11] Air travel still is the usual mode of travel from Rangoon and Mandalay to Sittwe and Ngapali, the popular beach resort. Only in 1996 was a highway from Sittwe to the mainland constructed. The state still does not have a rail line (although Myanmar Railways has announced a 480-km rail extension to Sittwe from Pathein via Ponnagyun-Kyauttaw-Mrauk U-Minbya-Ann).[12]

The airports in Rakhine State are

A deep sea port was built by China investment in Kyaukphyu to facilitate the transport of natural gas and crude oil from Rakhine coastal to China without passing through Strait of Malacca.[13]

Rice is the main crop in the region, occupying around 85% of the total agricultural land. Coconut and nipa palm plantations are also important. Fishing is a major industry, with most of the catch transported to Yangon, but some is also exported. Wood products such as timber, bamboo and fuel wood are extracted from the mountains. Small amounts of inferior-grade crude oil are produced from primitive, shallow, hand-dug wells, but there is yet unexplored potential for petroleum and natural gas production.

Tourism is slowly being developed. The ruins of the ancient royal town Mrauk U and the beach resorts of Ngapali are the major attractions for foreign visitors, but facilities are still primitive, and the transportation infrastructure is still rudimentary.

While most places in Myanmar suffer from chronic power shortages, in rural states like Rakhine the problem is disproportionately greater. In 2009, the electricity consumption of a state of 3 million people was only 30 MW, or 1.8% of the country's total generation capacity.[14] In December 2009, the military government added three more hydropower plants, Saidin, Thahtay Chaung and Laymromyit, at a cost of over US$800 million. The three plants together can produce 687 MW but the surplus electricity will be distributed to other states and divisions.[14]

Educational opportunities in Myanmar are extremely limited outside the main cities of Yangon and Mandalay. The following is a summary of the public school system in the state in academic year 2002-2003.[15]

Sittwe University is the main university in the state.

The general state of health care in Myanmar is poor. The military government spends anywhere from 0.5% to 3% of the country's GDP on health care, consistently ranking among the lowest in the world.[16][17] Although health care is nominally free, in reality, patients have to pay for medicine and treatment, even in public clinics and hospitals. Public hospitals lack many of the basic facilities and equipment. In general, the health care infrastructure outside of Yangon and Mandalay is extremely poor but is especially worse in remote areas like Rakhine State. The entire Rakhine State has fewer hospital beds than the Yangon General Hospital. The following is a summary of the public health care system in the state.[18]