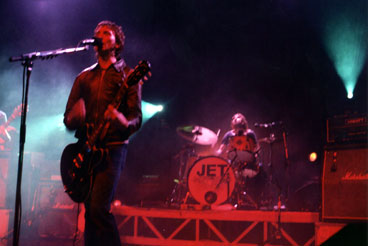 Brothers and grew up in listening to from the 1960s and 1970s such as , , , , and particularly and ; these were their father's records. In an interview for the documentary "Take It Or Leave It", which was also recorded on the band's "" live , Chris stated:

"It's always interpreted that our father had a great record collection, but that's not true. It was actually a really shit collection that Nic managed to find the gems in."

However, according to Nic, it was Australian band who had the biggest influence on Jet’s developing musical tastes:

“ was the most important album of my generation ... I think everyone our age, who played guitar, played You Am I songs for the first time in front of their school assembly ... That was the record that made you realise you could be in an Australian band, you didn’t have to be a grunge band and you didn’t have to be influenced by American bands. It changed everything.” [ [http://www.news.com.au/dailytelegraph/story/0,22049,21084370-5006011,00.html Wizards of Oz] The Daily Telegraph]

They decided to form a band with , Nic's friend from school and with whom he had been in a band, and with bassist Doug Armstrong whom Nic and Chris met whilst working together at their Dad's spice factory.

During 2001 an old high school friend of Chris' joined the band on keyboard, and it was at this time that the band took their current name from the song "Jet" from Wings' 1973 album "". "Radio Song", from their album "", was written about the troubles that the band had getting recognition at this time.Jet got their big break when seminal Melbourne Punk rock band The Specimens took Jet under their wing and put them on as an opening act at The Duke of Windsor.

The new band met Mark Wilson one night in 2002 at a concert and, despite already having a bass player, asked him to play with them. Wilson was then the bassist in a band called The Ca$inos, so he initially declined. However, a few days later he called the band and said he would like to join them instead.

In 2002 the band, consisting of its current members, released the "Dirty Sweet EP", which drew its name from the T. Rex song "Bang a Gong (Get It On)". While the band only pressed 1,000 copies, there was such a demand that they pressed 1,000 more. The timing of this record coincided with the breakthrough of , meaning that international interest in Australian rock bands was high. "NME" obtained a copy of the single from "Dirty Sweet", "Take It or Leave It", and praised it. offered the band a contract and re-released "Dirty Sweet" in 2003.

Jet entered the in Los Angeles with to produce their debut album "". Sardy had previously produced records for Marilyn Manson and . They also enlisted the services of keyboard maestro for two of the songs. The album derived its name from a line in the song "" from "". Halfway through recording, the band received a call from offering them a support slot on the Australian leg of their 2003 tour.

Their singles "" and "" were voted number one and number nineteen respectively on the 2003 Triple J Hottest 100. "Are You Gonna Be My Girl" appeared on the s for the games "", Guitar Hero: On Tour and "", the 2006 animated film "", and the 2008 film "". It was also part of two major worldwide advertising campaigns for Apple's and . "Get Born" also includes the song "Timothy", dedicated to vocalist/guitarist Cameron Muncey's brother, who died before he was born. Due to the sensitive nature of the song, the band rarely plays "Timothy" live.Fact|date=June 2007

In early 2004, Jet teamed up with and on "the Aussie invasion" tour of US cities. A new Jet song not included on "Get Born", called "Hold On", was featured on the "Spider-Man 2" soundtrack that year. TV/film producer J.J. Abrams - whose credits include "Lost" and "" - contacted Jet to record a song for the Season 4 premiere to his show "Alias". "" from "Get Born" was used, and became the soundtrack to a frenetic scene of two CIA agents sprinting down a street, giving Jet further US exposure.

Later the same year, the band was nominated in seven categories at the ARIA (Australian Record Industry Association) music awards. These included single and album of the year. At the awards ceremony on the Jet received six awards out of the seven nominations. Nic Cester also performed as part of supergroup , featuring members of other Australian rock bands (Kram, drums), (Chris Cheney, guitar), (Pat Bourke, bass) and /The Pictures (Davey Lane, guitar).

The album was praised for being influenced by many classic rock artists such as , and .

The debut single from the band's second album "Shine On", titled "", was released to radio on . "Shine On" was released on ( in the UK, in the US) with a final track listing of 15 songs. It debuted at #3 on the Australian charts but failed to match the success of "Get Born". Critical reaction to the album was mixed; British music magazine "NME" called the record "another joyfully old-fashioned rock'n'roll album immersed in the classics," [ [http://www.nme.com/reviews/jet/8037 "NME" review] ] while the American review site Pitchfork Media posted a totally anomalous review containing only a video clip of a chimpanzee urinating in its own mouth. [ [http://www.pitchforkmedia.com/article/record_review/38853 Pitchfork Media review] ] "" said that the album sounded too much like Oasis while also praising songs such as "Eleanor" and "Stand Up". The song also appeared on "NME"'s compilation CD, "NME: The Essential Bands - Festival Edition".

Jet played at the Awards in . It was their first live performance since Nic Cester's halted their World Tour. In November 2006 they flew back to Australia to perform at the in Melbourne at the ; upon their return they also held a secret show on a barge floating on the . The second singles from the album, "" (in the UK) and "Rip It Up" (in Australia) were released in November 2006. The album also spawned an EP, the "" released December 2006.

The title track, "Shine On", was released on various dates in March 2007 around the world as the third single (second single in some countries). The song is a tribute to Nic and Chris Cester's father, who died from cancer in 2004. [ [http://www.theage.com.au/articles/2004/10/17/1097951560187.html Jet dominate the ARIAs ("The Age")] ] It was written by Nic Cester from the perspective of his father encouraging those who survive him to "shine on." Many songs on the album ("Come On Come On", "Bring It on Back", "Stand Up", "Holiday", "All You Have to Do") are primarily about overcoming adversity and challenge. The album also features some of the first s ("Skin and Bones," "Eleanor") the band has included on their major album releases. These songs indicate a growth in Jet's lyrical style and a growth in their portrayal of in their songs.

Jet headlined a series of shows during the festival in Australia and New Zealand, with opening acts Tool, Muse, The Killers, and . The band played their Rip It Up Oz tour in late May and June 2007, which was supported by Channel V. Also in 2007, they released a new song for the titled "Falling Star". In addition, their song "Rip It Up" appeared on the "TMNT" soundtrack.

The band returned to Australia to perform at the AFL Grand Final and to finish the rest of their world tour. They announced on their website that they would begin production on their third studio album, due for a 2008 release. However in October 2007 the band announced they would take "time off" for an unspecified amount of time. They stated that after touring for "Shine On" they needed some "down time". [ [http://thelondonpaper.typepad.com/thelondonblog/2007/10/jet-split-for-n.html Jet split... for now ("thelondonpaper")] ] As of October 24 Chris and Mark produced a song, under the name "The Vice Lords" for the ese duo Superfly titled "".

Jet's third studio album is currently being recorded and is due for a late 2008 release. In a new video on their website, the band talks about writing and recording songs at in New York City. joked: "We've got to stop writing; we got fucking too many songs." They have also collaborated with to release a cover of the single "Wild One".

In June 2004, Jet joined and to lobby the world's largest chicken fast food chain, , to improve the lives of the chickens raised on its farms."Please let me - and concerned consumers throughout Australia - know that you will end the most horrific forms of abuse suffered by chickens raised and killed for KFC," Jet band members Nic Cester, Chris Cester and Mark Wilson wrote in a letter to Yum! Brands CEO David Novak. The letter was part of a campaign backed by . [ [http://www.smh.com.au/articles/2004/06/22/1087844921870.html?from=storyrhs Jet takes on KFC (SMH)] ]

In May 2008, Jet released a video clip on paying tribute to the work of the late .Lead singer Nic Cester says he wanted to highlight that Professor Hollow's work to restore sight to the cataract blind in developing countries was ongoing 15 years after his death."Fred Hollows was such a big figure in Australia and he had a huge impact, but he passed away when there was still work to do," Cester said in a statement. "This clip is a bit of a reminder, hopefully it encourages people to make a donation to keep Fred's work going." [ [http://news.ninemsn.com.au/article.aspx?id=569559 Jet releasing Fred Hollows tribute clip (NINEMSN)] ] The video tribute features Jet's hit song along with images compiled by . [ [http://optuszoo.news.ninemsn.com.au/article.aspx?id=569559 Jet releasing Fred Hollows tribute clip (NINEMSN)] ]