Comino
Not to be confused with Comino Valley.

The west coast of Comino, with St Mary's Tower as seen from the Gozo-Malta ferry

Comino (Maltese: Kemmuna) is an island of the Maltese archipelago between the islands of Malta and Gozo in the Mediterranean Sea, measuring 1.35 square miles (3.5 km2) in area. Named after the cumin seed that once flourished in the Maltese islands, Comino is noted for its tranquility and isolation. It has a permanent population of only four residents. One priest and one policeman commute from the nearby island of Gozo, to render their services to the local population and summertime visitors. Today, Comino is a bird sanctuary and nature reserve. Administratively it is part of the municipality of Għajnsielem, in southeastern Gozo.

Comino is known to have been inhabited by farmers during Roman times, however for long periods in its history it has been sparsely populated, privately owned, or abandoned entirely.

Its rugged coastline is delineated by sheer limestone cliffs, and dotted with deep caves which were popular with pirates and marauders in the Middle Ages. The caves and coves of Comino were frequently used as staging posts for raids on hapless boats crossing between Malta and Gozo. In later years, the Knights of Malta used this island as hunting and recreational grounds. The Knights were fiercely protective of the local game, which consisted of wild boar and hares (Maltese: fenek tal-grixti): upon conviction, poachers were liable to a penalty of three years as a galley slave.[1]

From 1285 until some time after 1290, Comino was the home of exiled prophetic cabbalist Abraham Abulafia. It was on Comino that Abulafia composed his "Sefer ha-Ot" (The Book of the Sign), and his last work, "Imre Shefer" (Words of Beauty).

In the 16th and 17th centuries, Comino served as a place of imprisonment or exile for errant knights. Knights who were convicted of minor crimes were occasionally sentenced to the lonely and dangerous task of manning St. Mary's Tower.

In the past, and well into the 20th century, whenever the seas were too rough for the Gozitan priest to make the crossing to Comino for the celebration of Holy Mass, the local community would gather on the rocks at a part of the Island known as Tal-Ħmara, and gaze across the channel towards the Chapel of Our Lady of the Rocks (Maltese: il-Madonna tal-Blat), in Ħondoq ir-Rummien, Gozo, where Mass was being celebrated. They followed along with the progression of the Mass by means of a complex flag code.

On 6 March 1889 the British battleship HMS Sultan grounded on an uncharted rock in the Comino Channel, ripping her bottom open.[2] She slowly flooded and, in a gale on 14 March 1889 she slipped off the rock and sank. The Italian firm of Baghino & Co raised her in August for a fee of £50,000.[2] On 27 August Sultan was brought into Malta.[2] 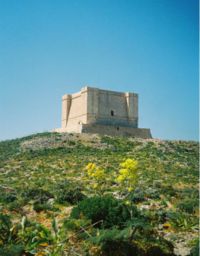 St. Mary's Tower is the most visible structure on the island. Its background dates back to 1416, when the Maltese petitioned their king, Alfonso V of Aragon, to build a tower on Comino to serve as an early warning system in case of invasion, and to deter marauding Turks, pirates, smugglers and corsairs from using Comino as a hiding place and staging ground for devastating sorties onto the sister islands of Malta and Gozo.[3] Two years later the king levied a special tax on imported wine to raise funds for this project, but diverted the monies into his coffers; the island remained undefended for another two hundred years.[4]

Finally, in 1618 the Knights of Malta under Grandmaster Wignacourt erected St. Mary's Tower (Maltese: it-Torri ta' Santa Marija), located roughly in the center of the southern coast of the island.[5] The tower formed part of a chain of defensive towers — the Wignacourt, Lascaris, and De Redin towers — located at vantage points along the coastline of the Maltese Islands, and greatly improved communications between Malta and Gozo. The tower is a large, square building with four corner turrets, located about 80 metres above sea level. The Tower itself is about 12 metres tall, with walls that are approximately 6 metres thick, and is raised on a platform and plinth that are approximately 8 metres high.[6]

During the French Blockade (1798–1800), St. Mary's Tower served as a prison for suspected spies. In 1829 the British Military abandoned the site. For several decades it was deemed to be property of the local civil authorities, and may have been used as an isolation hospital, or even as a wintering pen for farm animals.[6] The tower again saw active service during both World War I and World War II. Since 1982 the tower has been the property of the Armed Forces of Malta. It now serves as a lookout and staging post to guard against contraband and the illegal hunting of migratory birds at sea.

St. Mary's Tower underwent extensive restoration between 2002 and 2004. Today, it remains the most notable structure on Comino, and provides a destination for tourists taking walks around the Island.

Other buildings and structures

A tiny Roman Catholic chapel dedicated to the Sacred Family Upon its Return from Egypt is located above Santa Marija Bay. Built in 1618, and enlarged in 1667 and again in 1716, the chapel was originally dedicated to the Annunciation. It has been desecrated and reconsecrated at least once in its history, when Comino was devoid of residents. The earliest record of a chapel on this site dates back to the 12th century, and can be seen in a navigational map of the period, located in the National Maritime Museum and Royal Observatory in Greenwich, London.[7] Mass is celebrated in the chapel on Saturday nights and Sunday mornings for the residents, hotel staff and tourists.

St. Mary's Battery, built in 1716, at the same time as various other batteries around the coastline of mainland Malta, is situated facing the South Comino Channel. It is a semi-circular structure with a number of embrasures facing the sea. The Battery still houses two 24-pound iron cannons, and remains in a fair state of preservation mainly due to its remote location. Its armament originally included four 6-pound iron cannons. The Battery underwent restoration in 1996 by the Maltese heritage preservation society, Din l-Art Ħelwa. St. Mary's Redoubt, an additional defensive structure, was also constructed in 1716 on the northern coast of Comino, however it was subsequently demolished.[8] The Knights also constructed army barracks on Comino. In the early 20th century the barracks were periodically used as an isolation hospital.[9]

According to Maltese folklore, a mystical hermit named Kerrew would occasionally cross the channel between Malta and Comino on his cloak to meet the renowned cabbalist, Abulafia. 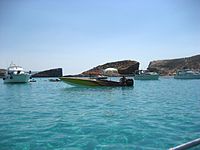 The Blue Lagoon at boat level with Kemmunett (Cominotto) in background.

Between Comino and adjacent islet of Cominotto (Maltese: Kemmunett) lie the transparent, cyan waters of the Blue Lagoon (Maltese: Bejn il-Kmiemen, literally "Between the Cominos"). Frequented by large numbers of tourists and tour boats daily, the Blue Lagoon is a picturesque bay with a white sandy base and rich marine life. It is popular with divers, snorkelers and swimmers. Other beaches on Comino include St. Mary Bay (Maltese: Ramla ta' Santa Marija) and St. Nicholas Bay (Maltese: Bajja San Niklaw).

Comino is a popular location for filmmakers. It appears in the movies Troy, The Count Of Monte Cristo and Swept Away. Most notably, St. Mary's Tower on Comino was featured in the film The Count of Monte Cristo, where it doubled as the Château d'If.