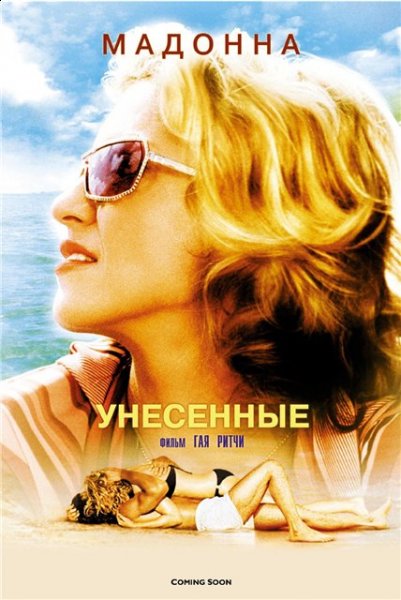 The movie was a commercial and critical failure, and did so badly in the that it was not released in theatres in the but went straight to video. Incensed by the critics' reaction, Madonna has sworn to never act in a movie again. The film was awarded five awards at the :
* Worst Picture
* Worst Actress for Madonna
* for Madonna and Giannini
*
* for Guy RitchieIn addition, the film was nominated for Worst Screenplay (by Ritchie), and Giannini for Worst Actor. The film holds the distinction of being the first film to win both Worst Picture and Worst Remake or Sequel. However, in his otherwise negative review of the film, "" critic Ed Gonzalez said: "Madonna gives her best performance since had her beaten to a pulp in his ""." [ [http://www.slantmagazine.com/film/film_review.asp?ID=505 Slant Magazine - Film Review: Swept Away ] ]

Amber Leighton (Madonna) is a rich, spoiled, and arrogant woman, invited on a private cruise from to by her husband Tony (). A storm leaves Amber on a desert island, together with the ship's Giuseppe (), a communist sailor with whom she eventually falls in love.

*Adriano Giannini reprised the role his father played in the original film.

*"Amber Leighton" is the maiden name of the mother of the director, Guy Ritchie.

*Madonna has only acted on film or television once since the movie was made, in a 2003 episode of "". She also featured in a documentary of her 2004 Re-Invention Tour called "", which was nominated for a for Best Long Form Music Video. Her sold-out stint in London in the stage play, "Up for Grabs" in 2002 received mixed reviews. More recently, she did voiceover work for the 2007 film "".

*Actress stated that the film was the worst movie she had ever seen.

The movie was a box office failure, having a budget of $10 million but grossing around $600,000. The movie's theatrical run ended after just three weeks [http://www.imdb.com/title/tt0291502/business] .

Due to the poor box office gross in the US, the movie went in the UK.

Songs from the film not featured on the album include "" by , "Ain't Nobody Here but Us Chickens" by , and "Fade into You" by .