The Military Demarcation Line (MDL), sometimes referred to as the Armistice Line, is the land border or demarcation line between North Korea and South Korea. On either side of the line is the Korean Demilitarized Zone (DMZ). The MDL and DMZ were established by the Armistice at the end of Korean War in 1953.[1]

In the Yellow Sea, the two Koreas are divided by a de facto maritime "military demarcation line" and maritime boundary called the Northern Limit Line (NLL) drawn by the United Nations Command in 1953.[2] The NLL is not described by the Korean Armistice Agreement.[3] 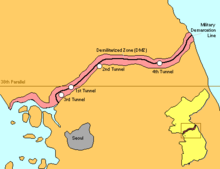 The Military Demarcation Line within the Demilitarized Zone 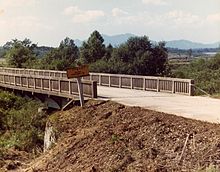 In Korean, the line is called the Hyujeonseon (휴전선), meaning "armistice line."[5] It is also sometimes called the Gunsa Bungye-seon (군사분계선), which literally means "military demarcation line." However, in colloquial usage, the dividing line is more often called the Sampalseon (삼팔선, "38th parallel"), a name likely coined at the end of World War II, when it would have been an accurate description of the North-South border.

The line itself is marked off by a series of 1,292 identical signs which are placed at intervals across the peninsula. The north facing side of the signs are written in Chosongul and Chinese, and in Hangul and English on the south facing side. The signs are aging and rusting.

There have been frequent skirmishes along the line since the armistice ended the fighting of the Korean War.

The Korean Armistice Agreement is the primary source which defines the MDL; and 21st century scholarly/academic secondary sources continue to recognize this as fundamental.[6] The Armistice is monitored by members of the Neutral Nations Supervisory Commission composed of members from the Swiss[7] and Swedish[8] Armed Forces.

Military Demarcation Line is a de jure term and MDL is an explicit acronym which remain valid today because no mutually acceptable changes have been made. The use of the term or acronym or line which is not explicitly mentioned in the 1953 KAA is not verifiable within the ambit of the primary source text.[9]

The unresolved aftermath of the Korean War has revealed unique, region-specific facets of this conflict.[10] Although the Korean Armistice Agreement specifies where the demarcation line and demilitarized zone are located on land, the agreement does not mention lines or zones in adjacent ocean waters.[11] 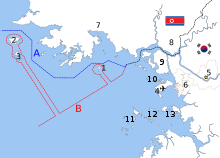 The disputed maritime border between North and South Korea in the Yellow Sea:[12]
A: United Nations Command-created Northern Limit Line, 1953[13]
B: North Korea-declared "Inter-Korean MDL", 1999[14] The locations of specific islands are reflected in the configuration of each maritime boundary, including

Shortly after the signing of the Armistice, a line in the sea was drawn unilaterally by the United Nations Command (UNC).[15] The contrived Northern Limit Line or North Limit Line (NLL) represents the northern limit of the area in which South Korean vessels may navigate, not a demarcation line on which the two Koreas agreed.[16] The Korean Armistice Agreement (KAA) provisions regarding the MDL and DMZ do not extend into the Yellow Sea or Sea of Japan.[17]

Some now construe the existence of a de facto or "practical" extension of the 1953 MDL.[21]

After more than fifty years, the South Koreans have come to construe a de-facto western inter-Korean border[22] which has remained unchanged since 1953.[23] The map at the right shows that the ambits of the NLL and North Korea's maritime MDL represent overlapping jurisdictional claims.[24] The DPRK rejected the NLL and only recognized the demarcation line it drew in 1999, which was further south of the NLL.[22]