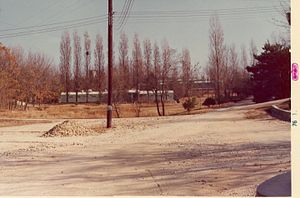 On August 1, 1953, the first Swiss NNSC delegation, consisting of 96 members, arrived in Panmunjeom. The first force reduction took place in 1955, when the delegation was reduced to 41 members. In the following years, the delegation was successively reduced. Since 1982, there are six Swiss members in Panmunjom and until August 1987, exactly 700 Swiss soldiers have worked for the NNSC in Korea. The mission of the NNSC is defined in article 41 of the Armistice and reads as follows: "The mission of the NNSC shall be to carry out the function of supervision, observation, inspection, and investigation and to report the results of such supervision, observation, inspection and investigation to the Military Armistice Commission." 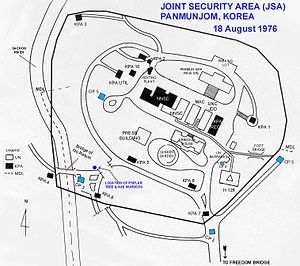 Map of the JSA showing NNSC buildings and location of CP# 5, the entrance to the Swedish and Swiss NNSC Camp.

From June 1956 to the year of 1993, the NNSC ceased their controls but solely forwarded the war parties' reports on entering and leaving military persons to the UNCMAC. The strengths of the delegations from Poland, Czechoslovakia, Sweden and Switzerland were reduced gradually: On June 9, 1956 to 14 members each, in 1960 to nine members each, and in 1978 to six members each. Residing inside the Joint Security Area (JSA) are the offices and conference room for the NNSC. North Korea forced out the Czech component early in 1993 and the Polish component early in 1995, both shortly after those countries underwent democratization following the dissolution of the Soviet Union and the dissolution of the Eastern bloc.

The NNSC members are assisted by administrative personnel from their own countries. Camps for the Swedish and Swiss members and their staffs are located in the southern half of the Korean Demilitarized Zone (DMZ) adjacent to the JSA. The former Polish and Czech camps which were located nearby on the north Korean side of the Military Demarcation Line, have been taken over by the KPA and are now used for other purposes.

Since 2008 the main role of the NNSC is to maintain and to build relations with both sides and maintain channel of communications open between them. Five Swiss representatives and five Swedish representatives are stationed in Panmunjeom, South Korea, on duty for the NNSC. Presently, their main task is to show presence at the inner Korean border and thus demonstrate that the ceasefire is still in force. Occasionally Polish delegates attend the meetings at Panmunjom, but through South Korea, as Poland has changed sides politically. The promotion of détente and security in the Joint Security Area (JSA) also falls within the framework of these activities and are the prerequisites for the accomplishment of these tasks.[1]