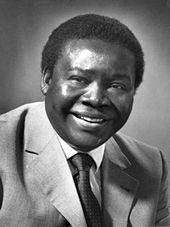 Enoch Olinga (June 24, 1926 – September 16, 1979) was born to an Anglican[1] family of the Iteso ethnic group in Uganda.[2] He became a Bahá'í, earned the title Knight of Bahá'u'lláh and was appointed as the youngest[1] Hand of the Cause, the highest appointed position in the religion. He served the interests of the religion widely and especially in Africa. He returned to Uganda during a time of turmoil and ultimately was murdered with his family.

The second son to Samusan Okadakina and Eseza Iyamitai,[3] his father was a catechist and missionary for the Anglican church. In 1927, Enoch's family moved to the village of Tilling[3] where he was educated in missionary schools.[1] He studied economics and learned several languages enough to be work as a translator. Eventually he learned six languages and published three books on language issues.[4] In 1941 Olinga joined the British Royal Army Educational Corps and served in Nairobi, capital of Kenya and beyond. On return to Uganda in 1946 he soon married and began having children (eight.) Around 1950, he moved to Kampala.[3] and encountered the Bahá'í Faith in 1951.[2] Though Olinga had already lost a government job from alcoholism he attended classes taught by Nakhjavani and became the third Ugandan to become a Bahá'í and swore off alcohol in February 1952.[5] He did so at the forefront of a period of large scale growth in the religion.[6][7] It was also the year he published Kidar Aijarakon, a translation of the New Testament in Ateso.[8][9] By October 1952 Olinga's father joined the religion.[10]

In 1953 he became the first Bahá'í pioneer to British Cameroon, and was given the title Knight of Bahá'u'lláh for that country. Ali Nakhjavani, and his wife along with Olinga and two other Bahá'ís travelled from Uganda to Cameroon - the other Bahá'ís were dropped along the way in other countries.[11] As the number of Bahá'ís grew in Cameroon new Bahá'ís left the immediate region to pioneer in other surrounding areas, each becoming a Knight of Bahá'u'lláh including Ghana, and Togo. Because of the successive waves of people becoming Knights of Bahá'u'lláh, Enoch Olinga was entitled "Abd'l-Futuh", a Persian name meaning "the father of victories" by Shoghi Effendi.[12] In 1954 a Bahá'í book belonging to Olinga, Paris Talks, became the basis of a Baha'i Church in Nigeria in Calabar which operated in 1955-56. The church was disconnected from the Bahá'í community but applied the Bahá'í teachings with virtually all of the Cameroonian men on one large palm plantation. The church was established, flourished, and then collapsed utterly unrecognized and unknown to the Bahá'ís and to the international Baha'i community until one of the founders tried to return the book. Both leaders of the church later officially joined the religion and helped form the first Local Spiritual Assembly of Calabar in 1957 and served in other positions.[13]

A biography published in 1984 examined his impact in Cameroon and beyond.[14] The first person in Cameroon to join the religion withstood beatings to persevere in his choice. The first woman to become a Bahá'í in Cameroon did so from his impact on her life though she had been an active Christian before - both she and her husband converted and were among the first to move to Togo and then Ghana. Another early Bahá'í, the first of the Bamiliki tribe, moved to what was then French Cameroon to help there. Another early contact joined the religion later but his wife was the first Bahá'í of Nigeria. The researcher again found that there was an emphasis not on rooting out cultural traditions among the peoples but instead focusing on awareness of the religion and awareness of scientific knowledge should not relate to social class. There were accusations of political intrigue of which Olinga was acquitted. It was judged that Olinga was always sincere and never belittled.

In February 1957, in four years, Olinga traveled on Bahá'í pilgrimage for 10 days.[3] Immediately afterwards he was able to visit back to Uganda to attend the laying of the foundation stone of the first Bahá'í House of Worship of Africa.[11] In October 1957 Shoghi Effendi appointed him as a Hand of the Cause of God at the age of 31.[1] He was the only native African named as a Hand of the Cause.[4] In November news of the death of Shoghi Effendi spread though Olinga was unable to attend the funeral in London. However Olinga was in attendance for the first Conclave of the Hands in Bahjí on November 18, 1957 to review the situation and the way forward leading to the election of the Universal House of Justice.[3] Ebony magazine covered a conference in Uganda in January 1958 which Olinga and his wife attended and pictured him on page 129.[15] However Olinga did not stay in Uganda - he returned to Haifa where he served at the Bahá'í World Center until 1963[3] when Olinga chaired the opening session of the first Bahá'í World Congress in 1963 which announced the election of the first Universal House of Justice.[16] He then returned to live in East Africa and found he was estranged from his wife Eunica. They separated and divorced; he moved to Nairobi with his second wife, Elizabeth and all of his children and he continued to travel widely.[3] After fellow Hand of Cause Músá Banání died, Enoch purchased his home in Kampala. Additional travels after 1968 were extensive, including a tour of Upper West Africa in 1969 and later that same year, South America, Central America, passing through the United States, then the Solomon Islands, and Japan. In 1977, Olinga represented the Universal House of Justice at the International Conference held in Brazil and then attended another one in Mérida, Mexico.[3]

His co-religionist Dizzy Gillespie wrote a song named Olinga; and it was the title track of an album by Milt Jackson, produced by Creed Taylor, recorded in 1974 and re-issued in 1988[17] and covered by Judy Rafat on her tribute album to Gillespie in 1999.[18] Olinga was also a song released by Mary Lou Williams in 1995.[19]

In September 1977 the administrative institutions of the religion in Uganda had been disbanded by the government along with over two dozen other groups.[20] Soon the Uganda-Tanzania War broke out in 1978 and President Amin was overthrown by early 1979. Olinga returned to Uganda to protect the community as much as he could.[5][21]

The country was in a period of street violence from 1978.[20] In March 1979 the Olinga home was robbed though the temple was undisturbed and there was a suspicious accident where Olinga's car was rammed and forced down a hill by a troop transport vehicle, where he was robbed and left for dead,[5] and Olinga's son George was disappeared for a week by soldiers of Amin.[20] Death threats perhaps simply because of his prominence came to Olinga from his home town.[20] Meanwhile after President Amin fled in April the religion began to re-organize. After a night of area bombardment when Olinga spent the night praying in the temple and it and he emerged undamaged the organization of the religion began though his house was being plundered upon his return.[3] First was the re-opening of the Bahá'í House of Worship again,[22] and the beginning of reforming the national assembly in August.[20] Olinga chaired its first organizational meeting.

Neighbors and a garden servant boy bore witness mostly by hearing events of the execution of the Olinga family.[5][22] On the evening of Sunday, September 16, 1979, the birthday of one of Olinga's daughters and planned as a day of a family reunion of which a few could not arrive in time,[20] after 8pm local time five soldiers entered Olinga's home while one stood guard at the household gate and killed Olinga, his wife, and three of their five children. Trails of blood went from the kitchen to the back of the house and one of the children had been hurt and roughly bandaged before the family was executed. Enoch himself was killed out in the yard where he had been heard weeping after perhaps witnessing his dead family in the very same house he had joined the religion in.[20] The news was conveyed initially by the garden servant to a member of the national committee that had been appointed and then to a 79 year old pioneer, Claire Gung, who called internationally. Ultimately news reached the Universal House of Justice, the head of the religion, while it sat in session on the 17th. All the dead were buried in the Bahá'í cemetery on the grounds of the Ugandan Bahá'í House of Worship on the 25th while civil war and terrorism continued.[20] The funeral included hundreds of Bahá'ís who could make the trip and several members of the government of Uganda.[23]

One Olinga's surviving sons, George Olinga, in about February 1985 made a return trip to Uganda where he and another gave a talk at one the primary schools about the religion and the institutions of the religion.[24] Also in 1985 Claire Gung died.[25]