Doncaster Rovers Belles Ladies Football Club, previously Doncaster Belles, are an English semi-professional Women's association football club based at the Keepmoat Stadium in Doncaster, South Yorkshire. They were admitted to the FA WSL in 2010.

They are one of English women's football's most famous and successful clubs, being one of only two non-London teams to have won the FA Women's Premier League National Division, in 1992 and 1994. Founded in 1969 by lottery ticket sellers at Belle Vue, home of Doncaster Rovers Football Club, they have also won the FA Women's Cup six times and reached the final on a further seven occasions.

The club was founded as the Belle Vue Belles in 1969, by Sheila Stocks and other women who sold 'Golden Goals' lottery tickets during Doncaster Rovers home games at Belle Vue.[1] After finding success in informal local competition, the club became Doncaster Belles in 1971[2] and joined the Sheffield League in 1972. With the demise of the Sheffield League after three seasons, the Belles joined the Nottinghamshire League setup and dominated for over a decade.[3] Following a reorganisation in 1989, the club won the new North East League in both seasons of its existence, before being invited to join the inaugural eight–team National Division in 1991.[4]

Stocks played for the club for 24 years, hanging up her boots aged 41 after the 1994 Women's FA Cup final.[5] She later served as physiotherapist and club welfare officer.[6] A teacher by trade, she married future Belles manager Paul Edmunds who worked at the same school.[7] In 2008 Sheila was awarded the FA Special Achievement Award.[8] 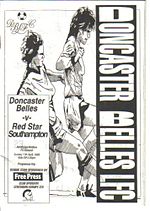 The club reached the Women's FA Cup final for the first time in 1983, defeating St Helens 3–2.[3] The Belles then lost the next three successive finals; to Howbury Grange (2–4), Friends of Fulham (0–2) and Norwich (3–4).[9] In May 1987 the club recaptured the trophy, beating St Helens 2–0 at the City Ground in Nottingham. Doncaster Belles retained the Cup in 1987–88 by defeating Merseyside team Leasowe Pacific 3–1. But they missed out on the following year's final, as a resurgent Leasowe inflicted a 3–2 defeat on Friends of Fulham at Old Trafford, in front of Channel 4 television cameras.[10] In 1990 the Belles were back in the final, Gillian Coultard scoring the only goal as Friends of Fulham were beaten at the Baseball Ground in Derby. 1991's final saw the club lose out 1–0 to Millwall Lionesses at Prenton Park.[11]

That summer the Women's Football Association invited the club to affiliate to a new, eight–team National Premier Division. England strikers Karen Walker and Gail Borman scored a combined total of more than 50 goals as the Belles won the inaugural 1991–92 championship with a 100% record.[12] Red Star Southampton were vanquished 4–0 in the WFA Cup final as the club won a League and Cup double.

The following season's League was expanded to 10 teams, and in March 1993 newly–promoted Arsenal inflicted only the Belles' second league defeat in 15 years, 2–1, before a crowd of 18,196 at Highbury.[13] The dropped points, coupled with a shock defeat to Wimbledon, meant that Arsenal captured the National Premier Division title.[14] The following month Arsenal confirmed their dominance by beating Doncaster Belles 3–0 in the WFA Cup final.[15]

In 1993–94 another costly defeat to Arsenal left the Belles needing three wins from their last four games to win the League.[7] This was achieved and the club regained the Premier Division title by four points from second–placed Arsenal.[16] The Belles also relieved Arsenal of the Cup after reaching their 11th Cup final in 12 years—the first to be played under the direct control of the Football Association. Karen Walker's header from a Joanne Broadhurst corner defeated Knowsley United 1–0 at Glanford Park in Scunthorpe.[17] The club was denied the chance of an historic treble, when the season overran and the Premier League Cup final against Arsenal was held over until the following campaign.[18]

After the Belles' second double in three years, long–serving manager Paul Edmunds considered retirement. He was persuaded to stay when three of the club's top players left for Knowsley United, who had reconstituted as Liverpool Ladies.[19] Edmunds drafted in youngsters Claire Utley from the youth team and Vicky Exley from Sheffield Wednesday, but injuries to key players[20] saw the team limp to a third place finish in the Premier Division.[21] In summer 1995 Edmunds stood down to be replaced by Mel Woodhall.[22] A fixture backlog at the end of season 1995–96 saw Croydon playing five games in ten days, winning four and drawing one to erode the Belles' 13–point lead[23] and win the National Premier Division on goal difference.[24] In March 1996 the Belles played Wembley in the Premier League Cup final. They conceded an injury–time penalty kick to draw 2–2 and then lost the penalty shootout.[25]

In 1997 manager Julie Chipchase ascribed the loss of the Belles' pre–eminent status to a rise in the standards of other teams. In 1996–97 the club had been knocked out of both Cups by eventual winners Millwall Lionesses, and finished second in the League to Arsenal.[26] The next two seasons saw third–placed finishes for the Belles, while 1999–00 resulted in another FA Women's Cup final appearance when holders Arsenal were beaten in the semi–final.[27] The final at Bramall Lane ended in a controversial 2–1 loss to Croydon, after Karen Walker had a penalty saved by Pauline Cope and Croydon scored a disputed winning goal.[28] Five days later Croydon became the first club to retain the National Premier Division title. A 6–0 win over Aston Villa ensured a finish one point ahead of the second–placed Belles.[29]

The next season began with an extensive recruitment drive; as England internationals Becky Easton and Karen Burke arrived from Everton and former stalwart Joanne Broadhurst rejoined the club from Croydon. When Croydon were taken over by Charlton Athletic, their veteran player-manager Debbie Bampton resigned and moved to the Belles in a playing capacity.[30] Although they had finished as runners–up to Croydon in both league and cup, the club were overlooked for a place in the inaugural Charity Shield match. An article in The Guardian described the selection of Charlton Athletic and Arsenal as curious and related to unspecified "commercial reasons".[31] The 2000–01 National Premier Division campaign saw the Belles return to top form, maintaining a 100% record until April, when a 1–0 home defeat to Arsenal handed the initiative to their southern rivals.[32] Arsenal also knocked the Belles out of both cup competitions on their way to a domestic treble. In May 2001 a presentation marked the retirement of club captain Gillian Coultard.[33]

Doncaster Belles did receive an invite to the 2001–02 Charity Shield, where they were beaten 5–2 by Arsenal at Kingsmeadow.[34] Goalkeeper Leanne Hall conceded a penalty, after her challenge on Clare Wheatley left the Arsenal player with a career–ending knee injury. Two weeks later at the teams' next meeting both sides lined up in tribute and Hall presented Wheatley with a bouquet of flowers. The match finished in a 4–1 defeat for the Belles.[35]

The merger was considered at a meeting between representatives of both clubs on 3 April 2002, followed by EGMs five days later.[36] In January 2003, Belles chairman John Gomersall met with the FA women's committee to discuss the merger.[37] In July 2003 the Doncaster Belles website announced the merger's completion. Under the terms of the agreement, the Belles would retain their financial and strategic independence. They also secured agreements to play a portion of home games at Belle Vue, to use the male club's Cantley Park training facility and to sell merchandise in Rovers' club shop.[38] 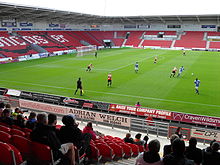 On 26 February 2009, the team played in the final of the Women's FA Premier League Cup but lost 5–0 to Arsenal Ladies.

The club's traditional colours are yellow and blue.[40] Since the link-up with Doncaster Rovers in 2005, however, the team has worn their current red and white hooped shirt with black shorts.

Doncaster Rovers Belles enjoy a longstanding rivalry with Arsenal Ladies,[41] who eventually overtook the Belles as the leading club in English women's football.[42] In 1994, the Belles' manager Paul Edmunds contrasted the northern, working class background of his players with the contrasting identity of the Arsenal team: "These soft Cockneys never done a hard day's work in their life. Never been down the pit, this lot [...]"[20] Stressing the relative loyalty of Doncaster Belles' players, in comparison to those of other leading clubs, long-serving Karen Walker said in May 2003: "There's a feeling here that we are representing the north."[43] 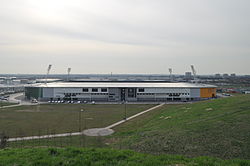 Since 2007 the home of Doncaster Rovers Belles has been the Keepmoat Stadium, although the majority of the team's matches have been played at the 500–capacity athletics track beside the stadium.[46] In January 2007 the club's first match in the 15,000–capacity main stadium resulted in a 5–2 defeat to Leeds United, before a crowd of 1,797.[42] Doncaster Rovers Belles are to play all their home fixtures in the 2011 FA WSL inside the main arena.[47]

When the English women's football setup was nationalised in 1991, the Belles became the first team to play their home games in a professional Football League ground at Belle Vue. However, they were often barred from doing so by Doncaster Rovers F.C. and had to find local non–League grounds in order to fulfil their fixtures.

In 1999 the club announced proposals for a purpose–built stadium at Toll Bar.[50] The following year Doncaster Council granted the club a lease of some land in the area.[51] The £1.6 million project was intended for the FA's launch of a professional women's League in 2003.[30]

A BBC television documentary screened in January 1995, called The Belles, featured the squad winning and then celebrating their double win the previous Spring.[52] However, the 'work hard, play hard' ethos revealed in the film did not find universal favour and the club was censured by the FA. Team captain Gillian Coultard felt the film led to her being controversially stripped of the England captaincy in the run-up to the 1995 FIFA Women's World Cup.

The following year a book entitled I Lost My Heart To The Belles told the story of the club's 1994–95 campaign through the eyes of journalist and author Pete Davies.[2] In April 2000 the Doncaster Rovers Belles squad released the first ever FA Women's Cup final song, entitled "Northern Pride".[53]

In 1998 the BBC television drama series Playing the Field began. Directly inspired by Doncaster Rovers Belles,[2] it was written by Kay Mellor, starred James Nesbitt and Ricky Tomlinson, and ran for five series' until 2002.

[55] Note: Flags indicate national team as has been defined under FIFA eligibility rules. Players may hold more than one non-FIFA nationality.

The following have played for Doncaster Rovers Belles and have been inducted into the English Football Hall of Fame :

The FA Women's Cup has been won six times, during a period of dominance which saw the Belles reach eleven out of twelve Cup finals from 1983 to 1994. Doncaster Rovers Belles also reached the finals in 2000 and 2002, but lost out to Croydon and Fulham, respectively. Their record in the competition is behind that of Arsenal Ladies, who have 11 wins in total, and Southampton, who were victorious eight times in the early years of the competition.[9]

The club has been less successful in the FA Women's Premier League Cup, reaching the final three times. A loss on penalties to Wembley in 1996 came between two heavy defeats to Arsenal in 1994 and 2009.

Doncaster Rovers Belles also competed for the FA Women's Community Shield in 2001 and 2003, but were beaten by Arsenal and then Fulham.