The Rusty Tussock Moth or Vapourer, Orgyia antiqua, is a moth in the family Lymantriidae that is native to Europe, but now transcontinental in distribution in the Palaearctic and the Nearctic regions. The orange-brown male flies mostly during the day, but the female is flightless, spending her brief life attached to her cocoon. The hairy caterpillar is spectacular, with "humps", "horns" and a "tail" in a combination of dark grey, red and yellow. It feeds on a wide range of broad-leaved trees and shrubs, and may reach pest proportions in forests and cities. 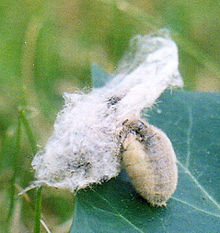 There is a striking dimorphism between the male and the female moths of this species. The male moth typically has orange- to red-brown (ochreous red and dark brown) wings; each forewing has a white comma-shaped (tornal) spot. He has marked plumose (short, bipectinate) antennae. The wingspan measures between 35 and 38 millimetres. The female moth has vestigial wings and is flightless; she is light grey-brown (ochreous grey), has "shortly bipectinate" antennae, and a swollen abdomen (de Worms, 1979; Waring et al., 2003). The caterpillar is distinctive (see images and below).

Orgyia antiqua is native to Europe, but now has a transcontinental distribution in the Palaearctic and the Nearctic regions (Carter, 2004).

In the UK, Orgyia antiqua may be encountered in a variety of shrub-based habitats, including gardens, parks, open woodland, fens, hedgerows, heaths and moors (Waring et al., 2003).

The male flies in a zigzag pattern—often high up in search of females—and is active during the day or at night. Males occasionally come to light (Waring et al., 2003). In New Brunswick, Canada, adult males are attracted to pheromone traps set in commercial forests for White-marked Tussock Moth (O. leucostigma) (Carter, 2004). 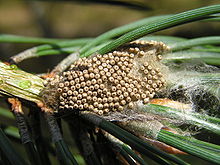 Several hundred eggs are laid on the outside of the female's empty cocoon, usually attached to a host-plant or something close by (e.g. fence, wall) (Waring et al., 2003). The species over-winters in the egg stage.

Each brownish egg is rounded, somewhat flattened top and bottom. There is a small darker depression in the upperside. (de Worms, 1979)

The larvae hatch early in the spring, as soon as foliage starts to appear (de Worms, 1979). They are easily recognized by their horn-like tufts of hair-like setae. There are 4 toothbrush-like tufts along the back, and hair pencils that project from the sides at the front and at the back. The body is dark grey to black, and there are red tubercules along the sides and back. They have defensive glands at the back, and wipe their setae against them to charge them with toxins (Wagner, 2005). They grow to about 30–40 mm, females being considerably larger than males (de Worms, 1979). In the UK, caterpillars can be found between May and early September (Waring et al., 2003).

The pupa forms in a crevice (e.g. in tree bark or fence) inside a silk cocoon. It is glossy black and hairy. (de Worms, 1979) 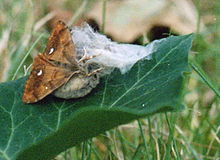 The female attracts other males via release of a pheromone, the males find the female via the concentration gradient of the released pheromeone. The female mates and lays her grey-yellow eggs in large numbers on her fine-meshed cocoon. The adult moths don't feed and are therefore granted only a short life. The two (sometimes three) generations fly from May till October; in North America there is only one generation a year (Wagner, 2005). In the UK, there is believed to be one protracted generation, from July to October in the south, and from September to October in the north (de Worms, 1979; Waring et al. 2003).

The males are diurnal, flying during the day, but are occasionally attracted to light (de Worms, 1979).

They are polyphagous and feed on a wide range of deciduous trees and shrubs, such as birch (Betula), Crataegus, Lime (Citrus), Prunus, Quercus, Rubus, Salix, Tamarix and Vaccinium (Porter, 1997; Wagner, 2005).

In Scotland, the species is almost always found on birch (de Worms, 1979).