Markazi Province (Persian: استان مرکزی, Ostān-e Markazi ) is one of the 31 provinces of Iran. The word markazi means central in Persian.[citation needed]

Markazi lies in western Iran. Its capital is Arak. Its population is estimated at 1.35 million. The present borders of the province date to the 1980s, when the province was split into the current Markazi and the Tehran Province, with portions being annexed by Esfahan, Semnan Province, and Zanjan.

The major cities of the province are: Saveh, Arak, Mahallat,Zarandiyeh, Khomein, Delijan, Tafresh, Ashtian, and Shazand (previously known as Sarband) 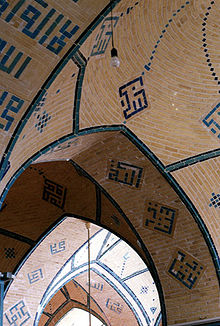 The Congregation Mosque of Narāgh. Markazi province is rich in historical and architectural heritage.

Markazi province was part of the Median Empire in the first millennium BC, which included all of the central and western parts of modern day Iran. The region is considered to be one of the ancient settlements on the Iranian plateau. Numerous remaining ruins testify to the antiquity of this area.

In the early centuries Islam, the name of the area was changed to Jabal or Qahestan. By the early 10th century, Khorheh had become a famous city of Jabal province, followed by Tafresh and Khomein.

In recent times, the expansion of the North-South railroad (commonly known as the Persian Corridor) and the establishing of major industries helped boost development in the area.

Markazi province consists of 11 counties and 18 districts (Khondab County has been added to the counties as of 2007).