The Morgan Motor Company is a British motor car manufacturer. The company was founded in 1910 by Harry Frederick Stanley Morgan, generally known as "HFS" and was run by him until he died, aged 77, in 1959.[1] Peter Morgan, son of H.F.S., ran the company until a few years before his death in 2003. The company is currently run by Charles Morgan, the son of Peter Morgan.

Morgan is based in Malvern Link, an area of Malvern, Worcestershire and employs 163 people. Morgan produced 640 cars in 2007. All the cars are assembled by hand. The waiting list for a car is approximately one to two years, although it has been as high as ten years in the past.

The visitor centre and museum feature a guided tour of the factory and exhibits about the company's history from Edwardian times until the present day, developments in automobile technology, and a display of automobiles.

The early cars were two-seat or four-seat three-wheelers, and are therefore considered to be cyclecars. Three-wheeled vehicles avoided the British tax on cars by being classified as motorcycles. Competition from small cars like the Austin 7 and the original Morris Minor, with comparable economy and price and better comfort, made cyclecars less attractive. 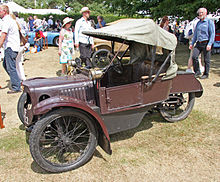 H.F.S. Morgan's first car design was a single-seat three-wheeled runabout, which was fabricated for his personal use in 1909. Interest in his runabout led him to patent his design and begin production. While he initially showed single-seat and two-seat versions of his runabout at the 1911 Olympia Motor Exhibition, he was convinced at the exhibition that there would be greater demand for a two-seat model.[2] The Morgan Motor Company was registered as a limited private company only in 1912 with "H.F.S." Morgan as managing director and his father, who had invested in his son's business, as its first chairman.[1]

Morgan built his cars' reputation by entering them in competitions. One of his racing cars won the 1913 Cyclecar Grand Prix at Amiens in France. This became the basis for the Grand Prix model of 1913 to 1926, from which evolved the Aero, Super Sports, and Sports models.[3]

These models used air-cooled or liquid-cooled variations of motorcycle engines.[4] The engine was placed ahead of the axis of the front wheels in a chassis made of steel tubes brazed into cast lugs.[5]

The V-Twin models were not returned to production after World War II. 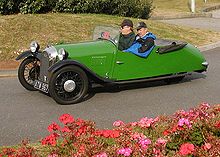 Beginning in 1932, a new series of Morgan three-wheelers began with the F-4. The F-4, and its later siblings the F-2 and the F-Super, used a pressed-steel chassis and the four-cylinder Ford Sidevalve engine that was used in the Model Y. Production of the Ford-engined three-wheelers continued until 1952.[3]

Morgan's first four-wheeler was the 4–4, for four-cylinder engine and four wheels. The first production 4-wheeled Morgan was released to the public in 1936 and is known as the Morgan 4–4 Series 1. Three-wheeler production continued alongside the 4–4 until 1952. 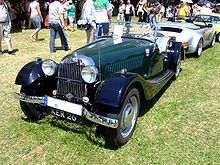 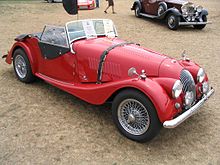 A version of the +4, designated the +4+, was made from 1964 to 1967 with a contemporary fibreglass coupe body. The light weight and reduced drag characteristics improved the performance of the +4+ over the regular +4 in every aspect. However, the traditional Morgan enthusiasts did not embrace this departure from Morgan custom, and mainstream enthusiasts did not embrace the seemingly archaic +4 chassis. Only 26 +4+ cars were built. 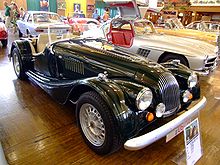 Faced with the decreasing availability of large four-cylinder engines for use in their +4 models, Morgan began to install the recently available Rover V8 engine in their cars in 1968, giving these cars the model designation "+8".

Horsepower (143–204 bhp), weight and performance varied with emission and structural laws through its history. In its final form, the GEMS Land Rover V8 produced 190 hp (140 kW). Thus powered, the car could accelerate from 0–60 mph in 5.6 seconds.

In 2004, Morgan came out with a traditional styled model to replace the departing Plus 8. The new model, named the "Roadster" is powered by a Ford UK Mondeo V6 producing 212 bhp (158 kW; 215 PS). In 2007, the Mondeo engine was replaced by a US version of the same engine in the Roadster II. 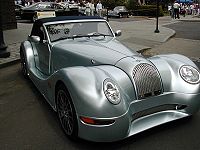 During its customer production lifetime (2002–2009), the Aero was configured in five official versions, (I,II, III, IV and the Aero America) with variations in styling, engines, transmissions, braking and suspension. The Company canceled its production in 2009. It was followed by the Aeromax, a limited coupe edition of 100 units produced between 2008 and early 2010.

The year of highest production was 2002.

The Morgan Aeromax is a coupe variation of the Aero 8. Production was limited to 100 cars, each costing £110,000. Customers have included Richard Hammond, Rowan Atkinson and Paul O'Grady. 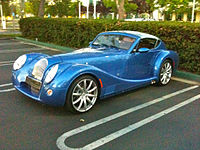 The Morgan Aero SuperSports is a targa-roofed version of the AeroMax, sharing its bonded aluminium chassis and lower bodywork with the coupe.[7] It was launched at the 2009 Pebble Beach car show in California. Already on sale in the UK and Europe, it will go on sale in North America in early 2011.

Based on the same chassis as the Aero Supersports, the Eva GT will be a 2+2 grand tourer, and as such it is longer in the body. The Eva GT will use BMW N54 twin-turbo straight-6 producing 302 bhp, this is Euro-6 emissions compliant. Launched at Pebble Beach 2010 and expected to go on sale in 2013, deposits have been taken since 2010.

Availability to the United States

For part of the 1950s and 1960s, the USA provided the company with its largest market worldwide, taking up to 85% of all production.[15] This ended with the first wave of US safety and emission regulations in 1971. For many years (1974 to 1992), all Morgans imported into the United States were converted to run on propane as fuel to pass the U.S. emissions regulations. However, this conversion, along with bringing the cars into compliance with US vehicle safety leglislation, was carried out by the dealership, and not by the factory, making the cars grey market vehicles.[16]

However, when the Rover Group re-certified their V8 engine for use in the Range Rover 4x4 sold in the U.S., Morgan was able to use the same engine for a fully US compliant stock Morgan from 1992 to 1996,[citation needed] and again from 1998 to 2004.[citation needed]In 2005, the engine was replaced with the US version of another traditionally-shaped model (with a V6) called the Roadster.

In 2002, Morgan centralised its international compliancy development and regulatory interaction in-house.[citation needed] In 2005, its right to import its classic models ceased when supplies of its necessary airbag were exhausted and no replacement was developed. In 2006, a request for an airbag exemption to the U.S. National Highway Traffic Safety Administration was refused, and the import of classic Morgans ceased.[17]

In 2005, the new Morgan Aero 8 model (versions 2 and 3) received a three year exemption from rear impact non-compliance,[18] along with a separate exemption for compliance with "advanced airbag requirements".[19] The rear-impact exemption lapsed in May 2008 without further application. Morgan has indicated to its US dealers that it plans to re-apply for US certification for some model at as yet an undetermined date in the future.[citation needed] 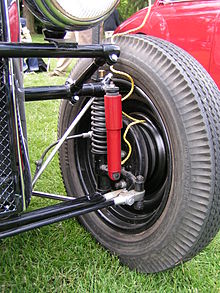 In spite of their traditional design, Morgans have always had sporting or "sports car" performance, due to their extremely low weight.

Among their enthusiasts, Morgans are affectionately known as "Moggies".

H.F.S. Morgan's 1909 Runabout used sliding pillar suspension, an independent front suspension system with each front wheel mounted on a kingpin mounted to slide along a fixed pillar and located by a spring. Morgan used developments of this suspension system throughout its existence and it is still used on Morgan's "classic" line, although not on the Aero 8 or its derivatives.

Morgan cars can be found in many areas of motorsport, from club and historic racing to more prominent examples, including the Le Mans 24hr race and the Morgan Aero 8 GT3 car. Another notable Morgan racecar was the Aero 8 GT car that campaigned in 2008 Britcar races and the 2008 Britcar 24hrs at Silverstone, prepared and run by Mark Bailey Racing.