Manganese Bronze Holdings PLC is an engineering company based in Coventry, England. Since the sale of its components division in 2003 the company has only one operating division—LTI Limited, trading as The London Taxi Company—which manufactures and retails London Black Taxis.

The London Taxi Company manufactures London Black Taxis and retails and provides maintenance services for taxis in the major cities of the United Kingdom.

Villiers Engineering Ltd, a motorcycle company chiefly known for its range of engines was taken over in the early 1960s by Manganese Bronze Bearings Ltd as it was then known.

Under chairman Dennis Poore as part of a rescue plan initiated by the Government Manganese Bronze absorbed part of BSA in 1973, including non-motorcycle business. The BSA motorcycles interests trading as Triumph were combined with the Manganese Bronze motorcycle production to form Norton Villiers Triumph (NVT). BSA Guns was liquidated in 1986. The components businesses of BSA became Manganese Bronze Components Division, comprising sintering, precision casting and metal powders. This division was sold in 2003 and went bankrupt a short while later.

Between July 2003 and November 2004 MBH sold its property portfolio, including the land under its Coventry manufacturing facility.

In January 2007, an Extraordinary General Meeting of the shareholders approved a joint venture with Geely Automobile to manufacture the London Black Cab and other vehicles in China. In June 2008, MBH announced the production of the first prototype TX4 taxi at its Chinese joint venture, LTI Shanghai.[1]

In July 2008, LTI Vehicles announced that its business had not avoided the global economic downturn, and would be laying off 40 employees.[2] 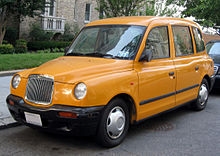 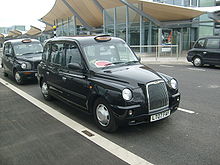 A TX4 at Heathrow Terminal 5.

The classic Austin FX3 "black cab" taxi of 1948 was built by car body builder Carbodies in partnership with Mann & Overton and Austin. More than 7000, mainly destined for London, were produced over ten years. Carbodies concentrated on producing complete taxis, starting with the Austin FX4 in 1958/9; this is the classic cab still common today. They were taken over by Manganese Bronze Holdings plc in 1973. In 1982 Carbodies took over the intellectual rights to the FX4 from British Leyland (which had by then absorbed Austin).

Latterly, developed FX4 models were known as the LTI Fairway.

It was developed into the TXII, which was introduced in 2002. It is powered by a Ford Dura Torq 2.4-litre diesel engine and features an integral, fold-down ramp for wheelchairs. It also has an intermediate step and swivel-out seat for passengers with moderate walking difficulties. For people with hearing problems it has an induction loop incorporated in the intercom system.

The latest model as of 2006 is the TX4. It is powered by a VM R 425 DOHC diesel engine and features many refinements and enhancements.

All taxis operated in London, UK must comply with the Conditions of Fitness, which are managed by the Public Carriage Office (PCO). Formerly a civilian branch of the Metropolitan Police Service, the PCO is now part of Transport for London, under control of the Mayor of London.

Over 130,000 London Black Taxis have been produced at London Taxi Company's Coventry site over the past sixty years. Annual production has averaged between 2000 and 2500 units per year through the past decade.

Around two thirds of production goes into London via the London dealership in Islington. The remainder goes largely to the larger cities in the UK that have adopted the PCO's London Conditions of Fitness (including Glasgow, Edinburgh, Liverpool, Manchester, Birmingham, Coventry and Bristol). Outside these cities the market for taxis is dominated by multi-purpose vehicles that have been converted to make them wheelchair accessible in line with the Disability Discrimination Act 1995.

In June 2007 Manganese Bronze Holdings, The London Taxi Company’s parent company, finalised a joint venture with Geely Automobile Holdings Ltd to produce the purpose-built taxi in Shanghai, China. The joint venture company began producing the London Taxi in April 2009 following a successful launch at the Shanghai Auto Show. The vehicle is for sale not only in China but is also exported all over the world by The London Taxi Company. Production in Coventry to the UK market remains and benefits from the supply of lower cost components from China.

LTI rebranded to The London Taxi Company in 2010.

Chinese carmaker Geely Automobile has been in talks over the possibility of converting London’s black cabs into electric-powered cars. The company, which co-owns black London taxi-maker Manganese Bronze, says it has held talks with UK government officials about the plan.[2]