Der fliegende Holländer (The Flying Dutchman) is an opera, with music and libretto by Richard Wagner.

Wagner claimed in his 1870 autobiography Mein Leben that he had been inspired to write "The Flying Dutchman" following a stormy sea crossing he made from Riga to London in July and August 1839, but in his 1843 Autobiographical Sketch Wagner acknowledged he had taken the story from Heinrich Heine's retelling of the legend in his 1834 satirical novel The Memoirs of Mister von Schnabelewopski (Aus den Memoiren des Herrn von Schnabelewopski).[1] The central theme is redemption through love.

Wagner conducted the premiere at the Semper Oper in Dresden, 1843. This work shows early attempts at operatic styles that would characterise his later music dramas. In Der fliegende Holländer Wagner uses a number of leitmotifs (literally, "leading motifs") associated with the characters and themes. The leitmotifs are all introduced in the overture, which begins with a well-known ocean or storm motif before moving into the Dutchman and Senta motifs.

Wagner originally wrote Der fliegende Holländer to be performed without intermission — an example of his efforts to break with tradition — and, while today's opera houses sometimes still follow this directive, it is also performed in a three act version.

By the beginning of 1839 Richard Wagner was employed as a conductor at the Court Theatre in Riga. His extravagant lifestyle and the retirement from the stage of his actress wife, Minna, meant that he ran up huge debts. Wagner was writing Rienzi and hatched a plan to flee his creditors in Riga, escape to Paris via London and make his fortune by putting Rienzi on to the stage of the Paris Opéra. However this plan quickly turned to disaster: his passport having been seized by the authorities on behalf of his creditors, he and Minna had to make a dangerous and illegal crossing over the Prussian border, during which Minna suffered a miscarriage.[2] Boarding the ship Thetis, whose captain had agreed to take them without passports, their sea journey was hindered by storms and high seas. The ship at one point took refuge in the Norwegian fjords at Tvedestrand, and a trip that was expected to take 8 days finally delivered Wagner to London 3 weeks after leaving Riga.

Wagner's experience of Paris was also disastrous. He was unable to get work as a conductor, and the Opéra did not want to produce Rienzi. The Wagners were reduced to penury, relying on handouts from friends and from the little income that Wagner could make writing articles on music and copying scores. Wagner hit on the idea of a one-act opera on the theme of the Flying Dutchman, which he hoped might be performed before a ballet at the Opéra.

"The voyage through the Norwegian reefs made a wonderful impression on my imagination; the legend of the Flying Dutchman, which the sailors verified, took on a distinctive, strange colouring that only my sea adventures could have given it."[3]

Wagner wrote the first prose draft of the story in Paris early in May of 1840, basing the story on Heinrich Heine's satire "The Memoirs of Mister von Schnabelewopski" (Aus den Memoiren des Herrn von Schnabelewopski) published in Der Salon in 1834. In Heine's tale, the narrator watches a performance of a fictitious stage play on the theme of the sea captain cursed to sail forever for blasphemy. Heine introduces the character as a Wandering Jew of the ocean, and also added the device taken up so vigorously by Wagner in this, and many subsequent operas: the Dutchman can only be redeemed by the love of a faithful woman. In Heine's version, this is presented as a means for ironic humour; however, Wagner took this theme literally and in his draft, the woman is faithful until death.[4][5]

By the end of May 1841 Wagner had completed the libretto or poem as he preferred to call it. Composition of the music had begun during May - July of the previous year, 1840, when Wagner wrote Senta's Ballad, the Norwegian Sailors' song in Act 3 ("Steersman, leave the Watch!") and the subsequent Phantom song of the Dutchman's crew in the same scene.[6] These were composed for an audition at the Paris Opéra, along with the sketch of the plot. Wagner actually sold the sketch to the Director of the Opéra, Léon Pillet, for 500 francs, but was unable to convince him that the music was worth anything.[7] The rest of the opera was composed during the summer of 1841, with the Overture being written last, and by November 1841 the orchestration of the score was complete. Relieved of the need to give the Opéra a one-act drama, he had expanded the opera to the more conventional three acts.

Wagner's original draft had the action set in Scotland, and many of the characters had Scottish names. He changed the location and names to the final Norwegian version while the opera was in rehearsals for its first production, which took place in Dresden in January 1843 with Wagner himself conducting.

Writing in "Eine Mitteilung an meine Freunde" ("A Communication to my Friends") in 1851, Wagner claimed that Der fliegende Holländer represented a new start for him:

"From here begins my career as poet, and my farewell to the mere concoctor of opera-texts."

Indeed to this day Der fliegende Holländer is the earliest of Wagner's operas to be performed at the Bayreuth Festival, and, at least for that theatre, marks the start of the mature Wagner canon.

Der fliegende Holländer is scored for the following instruments:

Place: On the coast of Norway
Time: 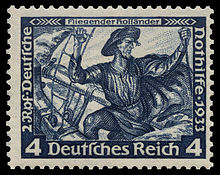 On his homeward journey, the sea-captain Daland is compelled by stormy weather to seek a port of refuge. He leaves the helmsman on watch and he and the sailors retire. (Song of the helmsman: "With tempest and storm on distant seas.") The helmsman falls asleep. A ghostly vessel appearing astern is dashed against Daland's vessel by the sea and the grappling irons hold the two ships together. Invisible hands furl the sails. A man of pale aspect, dressed in black, his face framed by a thick black beard, steps ashore. He laments his fate. (Aria: "The time has come and seven years have again elapsed") Because he once invoked Satan, the ghost captain is cursed to roam the sea forever without rest. An angel brought to him the terms of his redemption: every seven years the waves will cast him upon the shore; if he can find a wife who will be true to him he will be released from his curse.

Daland wakes up and meets the stranger. The stranger hears that Daland has an unmarried daughter named Senta, and he asks for her hand in marriage, offering a chest of treasure as a gift. Tempted by gold, Daland agrees to the marriage. The southwind blows and both vessels set sail for Daland's home.

A group of local girls are singing and spinning in Daland's house. (Spinning chorus: "Summ und brumm, du gutes Rädchen", transl. "Whir and whirl, good wheel") Senta, Daland's daughter, dreamily gazes upon a gorgeous picture of the legendary Dutchman that hangs from the wall; she desires to save him. Against the will of her nurse, she sings to her friends the story of the Dutchman (Ballad with the Leitmotiv), how Satan heard him swear and took him at his word. She vows to save him by her fidelity.

The huntsman Erik, Senta's former boyfriend, arrives and hears her; the girls depart, and the huntsman, who loves the maiden, warns her, telling her of his dream, in which Daland returned with a mysterious stranger, who carried her off to sea. She listens with delight, and Erik leaves her in despair.

Daland arrives with the stranger; he and Senta stand gazing at each other in silence. Daland is scarcely noticed by his daughter, even when he presents his guest as her betrothed. In the following duet, which closes the act, Senta swears to be true till death. 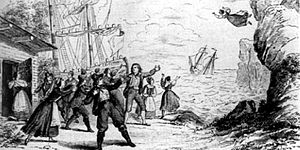 The last scene of Wagner's The Flying Dutchman (1843)

Later in the evening, the local girls bring Daland's men food and drink. They invite the crew of the strange vessel to join in the merry-making, but in vain. The girls retire in wonder; ghostly forms appear at work upon the vessel The Flying Dutchman, and Daland's men retreat in fear.

Senta arrives, followed by Erik, who reproves her for deserting him, as she had formerly loved him and vowed constancy. When the stranger, who has been listening, hears these words, he is overwhelmed with despair, as he thinks he is now forever lost. He summons his men, tells Senta of the curse, and to the consternation of Daland and his crew declares that he is the "Flying Dutchman."

As the Dutchman sets sail, Senta throws herself into the sea, claiming that she will be faithful to him unto death. This is his salvation. The spectral ship disappears, and Senta and the Dutchman are seen ascending to heaven.[8]