The raid was conducted by British Commandos of No. 3 Commando, two troops of No.2 Commando, a medical detachment of No.4 Commando, a demolition party from 101 Troop (canoe) of No. 6 Commando and a dozen Norwegians from Norwegian Independent Company 1. The action was supported by Royal Navy gunfire, led by the light cruiser HMS Kenya, with the destroyers HMS Onslow, Oribi, Offa and Chiddingfold.[1] The submarine HMS Tuna was in support as the force navigational check.[2] For troop transport the Prince Charles and Royal Air Force bombers and fighter-bombers.

The commando force of 570 troops was divided into five with these objectives.

Central to the operation was the destruction of fish-oil production and stores which the Germans used in the manufacture of high explosives. Another intention was to cause the Germans to maintain and increase forces in Norway which otherwise might be employed on the Eastern Front. 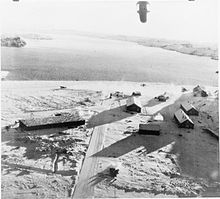 Aircraft from No. 114 Squadron RAF attacking the German airfield at Herdla in preparation of the landings at Vagsøy.

The dawn landing was preceded by a very effective naval bombardment and objectives went according to plan except in the town of Måløy itself. Opposition there was much stiffer than expected as unknown to the British, a gebirgsjäger (mountain troops) unit of experienced troops from the Eastern Front was there on leave.

Their experience in sniping and street fighting caused the operation to develop into a bitter house-to-house battle. This caused the commander, John Durnford-Slater, to call in the floating reserve and troops from Vågsøy Island. A number of local citizens assisted the commandos by acting as porters for ammunition, grenades and other explosives, and in carrying away the wounded.

At around 14:00, the commandos started their withdrawal having destroyed four factories, the fish-oil stores, ammunition and fuel stores, the telephone exchange and various military installations. Much of the town was in flames. The naval assault force of one cruiser and four destroyers had meanwhile sunk 10 vessels, some found in the act of being scuttled to prevent capture. 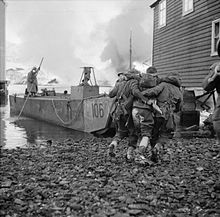 A wounded soldier is being helped onto a Landing Craft Assault.

No Royal Navy ships were lost, but the navy suffered four men killed and four wounded. The Commandos sustained 17 killed and 53 wounded, the commander of the Norwegians, Capt. Linge, was killed in an attack on the local German headquarters, and the Royal Air Force had eight planes downed. The commandos accounted for at least 120 enemy killed and returned with 98 prisoners and a complete copy of the German Naval Code. Several Quislings and a number of loyal Norwegians were also brought back. In conjunction with this raid, Operation Anklet was mounted by No. 12 Commando on the Lofoten Islands as a diversion.

The raid was enough to persuade Adolf Hitler to divert 30,000 troops to Norway, upgrade coastal and inland defences. Hitler thought that the British might invade northern Norway to put pressure on Sweden and Finland.