La traviata is an opera in three acts by Giuseppe Verdi set to an Italian libretto by Francesco Maria Piave. It is based on La dame aux Camélias (1852), a play adapted from the novel by Alexandre Dumas, fils. The title La traviata means literally The Fallen Woman, or perhaps more figuratively, The Woman Who Goes Astray. It was originally entitled Violetta, after the main character.

Piave and Verdi wanted to follow Dumas in giving the opera a contemporary setting, but the authorities at La Fenice insisted that it be set in the past, "c. 1700". It was not until the 1880s that the composer and librettist's original wishes were carried out and "realistic" productions were staged.[1]

The first performance of the opera was on 6 March 1853 at the La Fenice opera house in Venice. The performance was jeered at times by the audience, who directed some of their scorn at the casting of soprano Fanny Salvini-Donatelli in the lead role of Violetta. Salvini-Donatelli, though an acclaimed singer, was considered too old (at 38) and overweight by the audience to credibly play a young woman dying of consumption. (Verdi had previously attempted to convince the manager of La Fenice to re-cast the role with a younger woman, but with no success.) Nevertheless, the first act was met with applause and cheering at the end; but in the second act, the audience began to turn against the performance, especially after the singing of the baritone (Felice Varesi) and the tenor (Lodovico Graziani). The day after, Verdi wrote to his friend Muzio in what has now become perhaps his most famous letter: "La Traviata last night a failure. My fault or the singers'? Time will tell."[2]

After some revisions between 1853 and May 1854, mostly affecting acts 2 and 3, the opera was presented again in Venice, this time at the Teatro San Benedetto. This performance was a critical success, largely due to Maria Spezia-Aldighieri's portrayal of Violetta.

On 24 May 1856 the revised version was presented at Her Majesty's Theatre in London followed on 3 December of that year by its premiere in New York.

Today, the opera has become immensely popular and it is a staple of the standard operatic repertoire. It is second on the Operabase list of the most-performed operas worldwide, behind only The Magic Flute.[3] 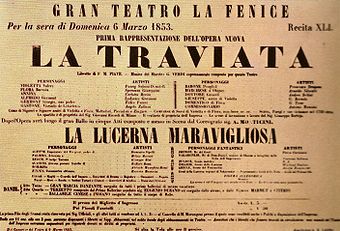 Poster for the world premiere of La traviata

Place: Paris and its vicinity.[5]
Time: Beginning of the 18th century

The salon in Violetta's house

Violetta Valéry, a famed courtesan, throws a lavish party at her Paris salon to celebrate her recovery from an illness. Gastone, a count, has brought with him his friend, the young nobleman Alfredo Germont, who has long adored Violetta from afar. While walking to the salon, Gastone tells Violetta that Alfredo loves her, and that while she was ill, he came to her house every day. Alfredo joins them, admitting the truth of Gastone's remarks.

The Baron, Violetta's current lover, waits nearby to escort her to the salon where the Baron is asked to give a toast, but he refuses, and the crowd turns to Alfredo (Alfredo, Violetta, chorus: Libiamo ne' lieti calici (Brindisi) – "Drinking song").

From the next room, the sound of the orchestra is heard and the guests move there to dance. Feeling dizzy, Violetta asks her guests to go ahead and to leave her to rest until she recovers. While the guests dance in the next room, Violetta looks at her pale face in her mirror. Alfredo enters and expresses his concern for her fragile health, later declaring his love for her (Alfredo, Violetta: Un dì, felice, eterea – "The day I met you"). At first she rejects him because his love means nothing to her, but there is something about Alfredo that touches her heart. He is about to leave when she gives him a flower, telling him to return it when it has wilted. She promises to meet him the next day.

After the guests leave, Violetta wonders if Alfredo could actually be the one in her life (Violetta: Ah, fors'è lui – "Perhaps he is the one"). But she concludes that she needs freedom to live her life (Violetta: Sempre libera – "Always free"). From off stage, Alfredo's voice is heard singing about love as he walks down the street. 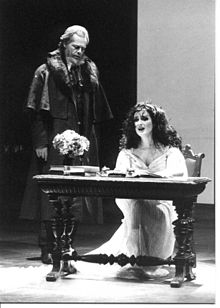 Three months later, Alfredo and Violetta are living together in a peaceful country house outside Paris. Violetta has fallen in love with Alfredo and she has completely abandoned her former life. Alfredo sings of their happy life together (Alfredo: De miei bollenti spiriti – "Wild my dream of ecstasy"). Annina, the maid, arrives from Paris, and, when questioned by Alfredo, tells him that she went there to sell the horses, carriages and everything owned by Violetta to support their country lifestyle.

Alfredo is shocked to learn this and leaves for Paris immediately to settle matters himself. Violetta returns home and receives an invitation from her friend, Flora, to a party in Paris that evening. Alfredo's father, Giorgio Germont, is announced and demands that she break off her relationship with his son for the sake of his family, since he reveals that Violetta's relationship with Alfredo has threatened his daughter's engagement (Giorgio: Pura siccome un angelo – "I have a daughter as pure as an angel") because of Violetta's reputation. Meanwhile, reluctantly, he becomes impressed by Violetta's nobility, something which he did not expect from a courtesan. She responds that she cannot end the relationship because she loves him so much, but Giorgio pleads with her for the sake of his family. With growing remorse, she finally agrees (Violetta, Giorgio: Dite alla giovine – "Say to this child of thine") and says goodbye to Giorgio. In a gesture of gratitude for her kindness and sacrifice, Giorgio kisses her forehead before leaving her weeping alone.

Violetta gives a note to Annina to send to Flora accepting the party invitation and, as she is writing a farewell letter to Alfredo, he enters. She can barely control her sadness and tears; she tells him repeatedly of her unconditional love (Violetta: Amami Alfredo – "Love me, Alfredo"). Before rushing out and setting off for Paris, she hands the farewell letter to her servant to give to Alfredo.

Soon, the servant brings the letter to Alfredo and, as soon as he has read it, Giorgio returns and attempts to comfort his son, reminding him of his family in Provence (Giorgio: Di Provenza il mar – "In Provence"). Alfredo suspects the Baron is behind his separation with Violetta and the party invitation, which he finds on the desk, strengthens his suspicions. He determines to confront Violetta at the party. Giorgio tries to stop Alfredo, but he rushes out.

At the party, the Marquis tells Flora that Violetta and Alfredo have separated. She calls for the entertainers to perform for the guests (Chorus: Noi siamo zingarelle – "We're youthful gypsies"); (Chorus: Di Madride noi siam mattadori – "We are bullfighters from Madrid"). Gastone and his friends join the matadors and sing (Gastone, chorus, dancers: E Piquillo, un bel gagliardo – "Twas Piquillo, so young and so daring").

Violetta arrives with Baron Douphol. They see Alfredo at the gambling table. When he sees them, Alfredo loudly proclaims that he will take Violetta home with him. Feeling annoyed, the Baron goes to the gambling table and joins him in a game. As they bet, Alfredo wins some large sums until Flora announces that supper is ready. Alfredo leaves with handfuls of money.

As everyone is leaving the room, Violetta has asked Alfredo to see her. Fearing that the Baron's anger will lead him to challenge Alfredo to a duel, she gently asks Alfredo to leave. Alfredo misunderstands her apprehension and demands that she admit that she loves the Baron. In grief, she makes that admission and, furiously, Alfredo calls the guests to witness what he has to say (Questa donna conoscete? – "You know this lady?"). He humiliates and denounces Violetta in front of the guests, and then throws his winnings at her feet. She falls, fainting onto the floor. The guests reprimand Alfredo: "Leave at once, we despise you. You have insulted a noble lady".

In search of his son, Giorgio enters the hall and, knowing the real significance of the scene, denounces his son's behavior (Giorgio, Alfredo, Violetta, chorus: Di sprezzo degno, se stesso rendo – "Worthy of contempt is the man").

Flora and the ladies attempt to persuade Violetta to leave the dining room, but Violetta turns to Alfredo: Alfredo, Alfredo, di questo core non puoi comprendere tutto l'amore – "Alfredo, Alfredo, you can't imagine the love in my heart for you".

Dr. Grenvil tells Annina that Violetta will not live long since her tuberculosis has worsened. Alone in her room, Violetta reads a letter from Alfredo's father telling her that the Baron was only wounded in his duel with Alfredo; that he has informed Alfredo of the sacrifice she has made for him and his sister; and that he is sending his son to see her as quickly as possible to ask for her forgiveness. But Violetta senses it is too late (Violetta: Addio del passato – "So closes my sad story").

But it is too late: she knows her time is up (Alfredo, Violetta: Gran Dio! morir si giovane – "O, God! to die so young"). Alfredo's father enters with the doctor, regretting what he has done. After singing a duet with Alfredo, Violetta suddenly revives, exclaiming that the pain and discomfort has left her. A moment later, she dies in Alfredo's arms.

Film and other versions

La traviata / The Fallen Woman (1853), music by Giuseppe Verdi, libretto by Francesco Maria Piave, after La dame aux camélias by Alexandre Dumas fils. Dual language Italian-English piano-vocal score, singable English translation by Mark Herman and Ronnie Apter commissioned by the Augusta [Georgia] Opera Association for performances in Augusta and Columbus in April and May 1981, and videotaped by Georgia Educational Television for broadcast over the Southern Public Television Network in 1982.