The Northrop N-3PB Nomad was a single-engined American floatplane of the 1940s. Northrop developed the N-3PB as an export model based on the earlier Northrop A-17 design.[1] A total of 24 were purchased by Norway, but were not delivered until after the Fall of Norway during the Second World War. Exiled Norwegian forces used them from 1941, operating from Iceland, for convoy escort, anti-submarine patrols, and training purposes from "Little Norway" in Canada. Within two years of delivery, the design was effectively obsolete in its combat role, and the remaining N-3PBs were replaced by larger aircraft in 1943.

Following increased international tension surrounding the German annexation of the Sudetenland in 1938, the Norwegian parliament granted extraordinary appropriations to modernize the Norwegian Armed Forces. The Royal Norwegian Navy Air Service (RNNAS) and the Norwegian Army Air Service were prioritized for funds from the NOK 50,000,000 Norwegian Neutrality Fund. The RNNAS' share of the funds were designated to buy 12 Heinkel He 115 torpedo bombers and 24 reconnaissance aircraft, as well as several new naval air stations. The Dornier Do 22, Northrop 8-A, Northrop 2GP and Vultee V-11 GB were considered and proposals retrieved. The commission quickly decided the Vultee V-11 GB was the best aircraft to satisfy both air services' needs.[2] On the part of the Royal Norwegian Air Service, the requirements were for a reconnaissance aircraft with a range of 1,500 km, a top speed of no less than 320 km/h and a payload of a 900 kg torpedo or the equivalent in bombs.[2]

On 30 December 1939, Norway sent a purchasing commission to the United States, consisting of a Royal Norwegian Navy Air Service contingent headed by Cmdr. Kristian Østby, and a Norwegian Army Air Service contingent led by Birger F. Motzfeldt.[2][3] The goal of the commission was to inspect the Vultee V-11, which was serve as a new common reconnaissance bomber for the two air services.[2] Amongst the requirements the commission hoped to fill was to replace the Royal Norwegian Navy Air Service's M.F.11 biplane patrol aircraft.[4] Once in the US, the commission found that Vultee would not be able to deliver the Vultee V-11 within a reasonable amount of time, and another aircraft had to be found.[2] Motzfeldt quickly found that the Douglas 8A-5N would satisfy the NOAAS' requirements. As the Douglas 8A-5N could not be fitted with floats, Østby had to continue looking for an aircraft suitable for the RNNAS.[2] After visits to many of the aviation companies in February 1940, Østby determined that only one manufacturer had both a design, and available production capacity, Northrop Aircraft Incorporated. The commission ordered 24 floatplanes based on the Model 8-A, renamed the N-3PB, "off the drawing board" (literally, the aircraft being ordered prior to the type having flown) from Northrop on 8 March 1940, at a total cost of NOK 6,550,000 to meet this requirement. Half the amount was paid shortly before the German invasion of Norway on 9 April 1940.[5]

The Model 8-A, the export model of the Northrop Attack Bomber series was never intended to serve as the basis of a floatplane and had to be redesigned to meet the requirements of the Norwegian order. The new N-3PB was the first product of Northrop Aircraft, which had reformed in 1939,[N 1] and was a low-winged cantilever monoplane fitted with twin floats. First intended for a lower powered engine, the N-3PB was ultimately powered by a Wright Cyclone radial engine, of the same type specified for the Douglas 8A-5N bombers and Curtiss Hawk 75A-8s ordered by Norway at the same time, simplifying the eventual maintenance and operation requirements for the entire Norwegian military aircraft fleets.[7]

With the Norwegian operation requirements drawn up for a coastal reconnaissance floatplane, a series of modifications were requested to the original design. The changes included a redesign of the float structure to accommodate either a torpedo or bomb load carried under the center fuselage to supplement five underwing bomb racks. Additional armament changes led to a combination of six machine guns replacing the four machine gun (two fixed forward, two flexible rear-mounted 7.9 mm)/one cannon (forward facing, fixed 20 mm) arrangement that was in the initial design. Provision for a rear under-fuselage gun was also made.[8] Further equipment requirements including fitting a rear fuselage-mounted camera as well as changes to instrumentation and radio equipment.[9]

Before Northrop could complete any aircraft, Norway was invaded by Germany.[10] The invasion and occupation of Norway necessitated that the armament of the N-3PB, originally to be installed in Norway, had to be changed. Initial specifications listed one Oerlikon 20 mm cannon in each wing, as well as two 7.9 mm Fabrique Nationale machine guns each in both fuselage and rear gunner stations.[11] Owing to the lack of availability of the originally specified armament, Norwegian-manufactured Colt heavy machine guns were substituted with four Colt MG53A .50 cal. machine guns in the wings and two .30 cal. Colt MG40s mounted in dorsal and ventral positions of the gunner's rear cockpit.[2] 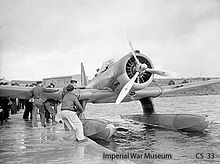 Northrop N-3PB of the Norwegian-manned No. 330(N) Squadron operated out of Iceland, October 1941. 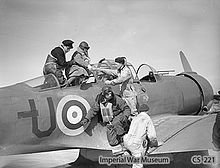 Northrop N-3PB from No. 330(N) Squadron was being used to transport a seriously ill woman to hospital in Reykjavik in Iceland, May 1942.

Northrop's Chief Test Pilot Vance Breese flew the first N-3PB (c/n 301) on 22 December 1940 from Lake Elsinore, California. The flight test and customer acceptance trials were successfully completed using the first production aircraft. Due to the use of the more powerful Cyclone engine, all performance estimates were exceeded and flight characteristics including maneouverability were considered "excellent."[12]All 24 aircraft were delivered to the exiled Royal Norwegian Navy Air Service by the end of March 1941.[13] In late February 1941, six production N-3PBs were flown to RCAF Station Patricia Bay, Vancouver Island in Canada, one of the Canadian winter bases of the Flyvåpnenes Treningsleir (FTL) Norwegian training bases known as "Little Norway".[12] The remaining 18 N-3PBs were used to equip No. 330 (Norwegian) Squadron RAF in Reykjavík, Iceland.[3] The N-3PBs sent to Iceland were all shipped across the Atlantic in crates on board the Norwegian steamer Fjordheim, the voyage from New York to Reykjavik taking 13 days to complete. Part of the reason for deploying the N-3PBs to Iceland were to avoid having the unusual aircraft operating over the United Kingdom, with the involved risk of friendly fire incidents.[14]

No. 330(N) Squadron was declared operational on 25 April 1941;[13] the N-3PBs were erected in a seaplane hangar at Reykjavik, with the first aircraft flying by 2 June 1941.[15] The squadron flew antisubmarine and convoy escort patrols from 23 June 1941, with flights based at Reykjavík, Akureyri and Budareyi.[3][16] While the squadron's N-3PBs carried out eight attacks on German U-boats,[3] including one on U-470 after it had surrendered to the British,[17] no U-boats were sunk.[3] On a number of occasions in 1942, the N-3PBs clashed with Focke-Wulf Fw 200 long range reconnaissance bombers and Blohm & Voss BV 138 flying boats, being credited with at least one damaged. On 10 October 1942, a "Northrop"[N 2] from Budareyi was involved in a friendly fire incident, attacking a British Lockheed Hudson. The incident ended without any of the aircraft involved being hit.[19]

In an effort to publicize the N-3PB operations, the British Air Ministry circulated a report that two Norwegian-flown aircraft had been involved in the attack on the German battleship Bismarck on 21–22 May 1941, but it was a patently false example of wartime propaganda. Despite many aviation historians disputing the claim, it still appears in current accounts of the sinking of the Bismarck.[20][N 3]

No. 330(N) Squadron began re-equipping with flying boats such as the Consolidated PBY Catalina in 1942,[13] with both the Catalina and the N-3PB, beginning to be displaced in February 1943 by the arrival of a more advanced flying boat in the squadron, the Short Sunderland.[21] Flying boats allowed for greater ranges to be covered, and typically had superior sea-going qualities to the N-3PB.[22] The surviving N-3PBs continued to operate alongside the Catalinas, flying fighter patrol, escort and antisubmarine operations off Iceland's east coast until early 1943.[23] Throughout the transition to other types, the squadron's C-Flight maintained an "all-Northrop" unit, predominately involved in secondary roles including army cooperation, transport, air-sea rescue, ice reconnaissance and ambulance roles.[24] In early 1943, No. 330(N)'s crews relocated to Oban, Scotland, on the troop ship Leinster. Two of the remaining N-3PBs flew to Oban.[25] The eight aircraft left behind on Iceland were scrapped in Reykjavik between December 1942–April 1943.[23]

The N-3PB's service as an advanced trainer in Canada in the "Little Norway" summer base at Island Harbour, Toronto and winter bases along the western coast of Canada, was relatively brief when it was determined that pilot and air crew graduates were to be integrated into RAF squadrons. Arrangements were made later in 1941 for the advanced flight training of Norwegian pilots to be carried out in RAF and Royal Canadian Air Force schools on types that better fit the transition to combat flying.[26] Consequently, the three surviving N-3PBs were stored until shipped to Iceland in March 1942 on the steamer Delta.[27][28]

Throughout its combat service from 23 June 1941–30 March 1943, No. 330(N)'s N-3PBs carried out 1,1011 operational sorties, totalling 3,512 hours flying time. Although eight attacks on U-boats proved inconclusive, the constant N-3PB escort patrols and antisubmarine sweeps were instrumental in guarding the sea lanes of the North Atlantic.[23]

During flight training at "Little Norway", there were several accidents resulting in the death of students and instructors. The FTL lost three N-3PBs in Canada in fatal crashes, two in British Columbia when the harbour in Toronto was frozen, at RCAF Jericho Beach Flying Boat Station near Vancouver and Patricia Bay, Vancouver Island, along with the aircraft involved in the ferry boat accident at Island Harbour.[29]

On 20 June 1941, while taking off, a N-3PB collided with the ferry Sam McBride in Port Race, Toronto Harbour, killing both the student pilot and instructor. The Toronto Star newspaper wrote that it was "a matter of time before one of the Norwegian aircraft crashes in the city itself." This fear, along with it being impractical to have flight training in the same place as the current civil aviation operations, precipitated a move to a new camp in Muskoka, Ontario.[30] At the new location, both ab-initio and advanced level training could take place, while advanced flight training continued at Island Airport.[31]

No. 330(N) Squadron also had notable accidents and fatalities, including its first operational loss when a N-3PB on a navigational training flight disappeared over the North Atlantic on 30 July 1941. Attrition through accidents began to decimate the squadron's operational fleet; N-3PB (c/n 311) was damaged beyond repair on 16 September 1942, when depth charges accidentally released and detonated while the aircraft was moored at Budareyi.[23]A total of 11 of the "Northrops" were lost with 12 casualties, including the squadron commander Cmdr. Hans Bugge and his crew who failed to return from an antisubmarine sweep on 25 August 1942. Despite an intensive search, no trace of the aircraft or crew was ever found.[23]

After a search through records, Ragnar R. Ragnarsson, then vice president of the Icelandic Aviation Historical Society pinpointed the crash site of N-3PB (c/n 320 ["U"]).[32] In 1979, the N-3PB wreck was recovered from the Þjórsá River in Iceland. Due to bad weather over Iceland's east coast, the N-3PB flown by Lt. W.W. Bulukin, operating from Budareyri and transiting to Reykjavik, made a forced landing on 21 April 1943. After being stuck in the silt, it gradually sunk to the river's bottom.[18]

US Navy divers began its initial recovery, later aided by a team of volunteer divers from Great Britain, Iceland, Norway and the United States, bringing up the remains that were sent to the Northrop Aircraft Corporation in Hawthorne, California. Restoration was completed by a 300 strong volunteer group, including 14 retired ex-Northrop employees who had been involved in the original N-3PB production line.[33] The complex restoration required the construction of replacement parts primarily by templating many damaged or corroded original aircraft components in order to create a complete airframe.[18] This only surviving aircraft is currently on exhibition as part of Norwegian Armed Forces Aircraft Collection at Gardermoen, Norway.[34] 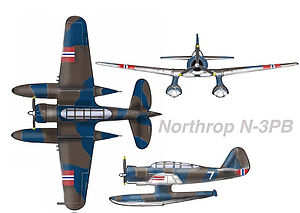 Data from War Planes of the Second World War: Volume Six Floatplanes,[35] The Encyclopedia of Weapons of World War II[22]