Tracy Raye Hickman (born November 26, 1955, Salt Lake City, Utah, United States)[1] is a best-selling fantasy author, best known for his work on Dragonlance as a game designer and co-author with Margaret Weis, while he worked for TSR. He married Laura Curtis in 1977, and together they have four children.

Tracy Hickman was born in Salt Lake City, Utah, on November 26, 1955, where he grew up.[1] He graduated from Provo High School in 1974, where his major interests were in drama, music, and Air Force JROTC.[citation needed] In 1975, Hickman began two years of service as a missionary for The Church of Jesus Christ of Latter-day Saints.[2] His initial posting was for six months in Hawaii before his visa was approved, and he moved on to Indonesia.[citation needed] There, he served as a missionary in Surabaya, Djakarta, and the mountain city of Bandung before leaving in 1977.[citation needed]

Hickman married his high school sweetheart, Laura Curtis,[1] in 1977,[2] within four months of his return to the United States.[citation needed] They are the parents of four children: Angel, Curtis, Tasha, and Jarod.[citation needed] Laura Hickman was the inspiration for Laurana Kanan.[1]

He eventually attended Brigham Young University.[1] Hickman has worked as a supermarket stockboy, a movie projectionist, a theater manager, a glass worker, a television assistant director, and a drill press operator in a genealogy center.

Tracy and Laura wrote the original versions of the modules Rahasia and Pharaoh together, and privately published them.[1] In 1981,[citation needed] Tracy went into business, but his associate left the Hickmans with $30,000 in bad checks to cover.[1] Driven into bankruptcy, Tracy sent Rahasia and Pharaoh to TSR, “literally so that I could buy shoes for my children”.[1] TSR wanted the modules, but hired Tracy as well: “They said it would be easier to publish my adventures if I was part of the company. So, we made the move from Utah to Wisconsin. It was a terrifying experience. We had no money. My parents begged us not to venture into such foreign territory to pursue such a bizarre career. My father wrote that there was a secure job as a fry cook in Flagstaff (where my parents were living), and he pleaded with me to come take it.”[1]

Hickman came to TSR in 1982, and soon thereafter management announced the intention to develop a series of role-playing adventures based on dragons. Hickman's proposal, code-named Project Overlord, was the Dragonlance Chronicles, which led to his association with Margaret Weis. This was the first project TSR had undertaken that would include adult novels as well as games, calendars, and other spin-off products. The original Drangonlance team was formed under Hickman's leadership.[1][3] "Project Overlord" began as a novel and three modules, and beginning in 1985 grew into the first Dragonlance trilogy (by Weis and Hickman) and 15 companion modules.[2] By 1987, the successful Dragonlance project had sold two million books and a half million adventure modules.[1]

Hickman left TSR in 1987, and in all wrote over 30 novels in collaboration with Weis.[2] Hickman and Weis also wrote the Darksword trilogy, the Death Gate Cycle, and the Sovereign Stone trilogy.[4] Hickman was the solo author of Requiem of Stars and The Immortals in 1996.[2] Of The Immortals, a near-future cautionary tale about AIDS concentration camps in Utah, Hickman said: "I was absolutely driven to write that book. I was able to say many things that I felt strongly about and still do. It is perhaps my finest work."[2] As of 1998, Hickman lived with his wife and four children in St. George, Utah.[2]

For the Starshield Project, Hickman and Weis produced the Del Rey Books published novels Sentinels (later retitled Mantle of Kendis-Dai) and Nightsword, and Hickman wrote a story for Dragon #250 called "Dedrak’s Quest". Hickman commented on this setting, "Starshield is a universe where a society of dragons can confront blaster-armed spacemen or wizards wielding magic staves with computer targeting", and said that the Starshield Project "grew out of my desire to share the creation process with all our fans. Many of the ideas, worlds, and creations submitted by our citizens find their way into our novels. Everyone whose material is used gets credit and a chance to participate in profits from online sales of their adventures."[2] According to Hickman, Starshield's ultimate purpose, and his biggest dream, was to finance a permanent colony on Mars by the year 2010: "Whether we make it to Mars may not be as important as that we honestly, courageously tried."[2] Readers were also able to use Hickman's website to freely download both the first novel in the series, and the Starshield roleplaying game.[2] 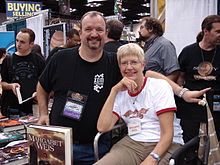 The Hickmans have been publishing game designs together for over twenty-five years including the popular and innovative Advanced Dungeons & Dragons Ravenloft module in 1983.[citation needed] Says Hickman of the original module, and its 1986 sequel Ravenloft II: The House on Gryphon Hill, "I still believe the original Ravenloft modules were perhaps the best that ever had my name on them."[2] They published their first joint novel, Mystic Warrior, in 2004. Tracy and Laura have been producing their DragonHearth podcast since December 2005.

In 1999 Pyramid magazine named Tracy Hickman as one of The Millennium's Most Influential Persons "at least in the realm of adventure gaming."[5] The magazine stated that Tracy Hickman and Margaret Weis are "basically responsible for the entire gaming fiction genre."[5] Hickman was inducted into the Origins Hall of Fame in 2002, recognized in part for "one game line turned literary sensation: Dragonlance."[6]

Hickman wrote the screenplay for, produced and edited the first science-fiction film shot in space, 'Apogee of Fear'.[7]

In 2009, Hickman released XDM: X-Treme Dungeon Mastery, a guide to DMing based on his years of experience in the trade. Written with his son Curtis Hickman and illustrated by online comic artist Howard Tayler, the book calls itself the 'cure for the common game.'[8]

In 2010, Tracy and Laura Hickman launched a direct to internet serialized fantasy series, "Dragon's Bard"[9] which introduced the concept of 'novel as souvenir' where subscribers would download periodical ebook chapters as the book was written and then receive a copy of the physical book upon the completion of the subscription. Hickman called the concept 'web like the Dickens' after its merging of 19th century literature serial techniques with modern internet distribution.

On his personal website, Hickman states that he remains a Mormon, and resides in South Jordan, Utah.[10]

Rose of the Prophet

Main article: Rose of the Prophet

Songs of the Stellar Wind