Aitzaz Ahsan was born in Murree, Rawalpindi District, Punjab in 1946 during British rule. After being educated at Aitchison College and the Government College, Lahore, Ahsan matriculated to Downing College, Cambridge to study law, and was called to the Bar at Gray's Inn in 1967.[1]

In 1975, Ahsan was elected to the Punjab Assembly after Chaudhry Anwar Samma, a member representing the Pakistan Peoples Party (PPP), was murdered. After his election, Ahsan was invited to join the cabinet and given the portfolio of information, planning and development. After the police opened fire on a rally of lawyers during the PNA demonstrations against the alleged rigging of elections by the PPP government in 1977, Ahsan resigned as a cabinet minister in protest, and was later expelled from the PPP.[1]

Following the 1977 coup d'état of General Muhammad Zia-ul-Haq, Ahsan became involved in the Movement for the Restoration of Democracy, and rejoined the PPP following the declaration of martial law. For his participation in the MRD he was repeatedly imprisoned.[1] Ahsan was elected to the National Assembly as a PPP candidate in 1988, serving as Minister for Law and Justice, the Interior and Narcotics Control before winning re-election in 1990 and losing in 1993. In 1994 he was elected to the Senate of Pakistan, where he sat as Leader of the Opposition until 1999. He was re-elected to the National Assembly of Pakistan as a Peoples Party candidate in the 2002 General Elections.[2] 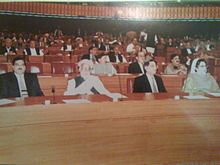 A Senior Advocate in the Supreme Court of Pakistan, and senior partner of the firm Aitzaz Ahsan & Associates Ahsan is a well-respected Pakistani lawyer, consistently given the highest rank by Chambers and Partners ranking of legal professionals.[3] He also made legal history of by having defended two Prime Ministers in the court of law. Having previously fought cases in defence of Benazir Bhutto in 2001 he took up a case in defence of former prime minister Nawaz Sharif.

Recently Barrister Aitzaz Ahsan and his team consisting of Shahid Saeed, Gohar Khan and Nadeem Ahmed successfully represented Chief Justice of Pakistan, Justice Iftikhar Muhammad Chaudhry's case in the Supreme Court of Pakistan [PLD 2007 SC 578]. They were pitted against a team consisting of 16 senior lawyers representing the Federation in this misadventure. The hearing was being conducted by a full court headed by Justice Khalil-ur-Rehman Ramday, and the 13-member panel reinstated the Chief Justice declaring his suspension by Pervez Musharraf regime "illegal."

During and after Emergency

Aitzaz Ahsan was arrested soon after the declaration of emergency/martial law,.[4][5] At the time he and his team [Shahid Saeed, Gohar Khan and Nadeem Ahmed] were arguing against the eligibility of General Musharraf to contest the 2007 Presidential Elections before a full bench of the Supreme Court of Pakistan. There have also been rumours that he is being kept in solitary confinement and being tortured. Recently, 33 US Senators wrote to President Musharraf to release Barrister Aitzaz Ahsan immediately, as he is widely respected all around the world. He withdrew his papers of nomination to run for the National Parliament, this in deference to National Lawyers' Convention decision to boycott elections under Mr. Musharraf. It has lifted his stature by putting the lawyers cause above his own.

Barrister Ahsan was succinct in his resolute to restore democracy and pre-emergency judiciary in Pakistan with peaceful resistance. He was rearrested during his three days reprieve for celebrating religious holiday; when he decided to offer prayers with Mr. Iftikhar Chaudhry and was heading to Islamabad. He has served detention in his house for 90 days and has declared his detention as illegal. It is reported (Nawaiwaqt 19 Jan 2008), with a dour determination he refused to abandon restoration of judiciary movement and was reluctant to negotiate when approached by Attorney General. His role in PPP after the assassination of Benazir Bhutto will be pivotal since he commands the respect of representatives of Punjab, the nations lawyers; elected President of Supreme Court Bar Association by an overwhelming majority, and public at large.

Aitzaz Ahsan, has been awarded the Asian Human Rights Defender Award by the Hong Kong-based Asian Human Rights Commission (AHRC) along with Munir A Malik (past President SCBA)(Dawn 23 Jan 2008). The annual Award for Distinction in International Law and Affairs will be presented to Aitzaz Ahsan in asbentia as more than 5,000 lawyers gather for the annual meeting of the New York State Bar Association (NYSBA). Freed for two days, Mr. Ahsan was rearrested for 30 days on 2 February 2008 before he was to board a flight to Sindh to offer his condolences to Benazir Bhutto's husband (Dawn 2 February 2008).

He has also authored the book The Indus Saga and the Making of Pakistan and its Urdu translation, Sindh Sagar Aur Qyam-e-Pakistan which presents the cultural history of Pakistan.[6]

He has also co-authored the book Divided by Democracy with Lord Meghnad Desai of the London School of Economics.[7]

Aitzaz Ahsan has been admitted to an Honorary Fellowship at Downing College, one of the constituent colleges of the University of Cambridge.[8] In an Internet poll of the US magazine Foreign Policy, Ahsan was voted one of the top 10 public intellectuals in the world in May 2008.[9]

In 2008, in an open online poll, Ahsan was voted the 5th topmost intellectual person in the world on the list of Top 100 Public Intellectuals by Prospect Magazine (UK) and Foreign Policy (US).[10]